Game developers have more free tools than ever to start building their projects, and one of the biggest companies providing that software is hyping up one of its products to make studios some money.

Above: An incentivized ad on mobile.

More than 60 percent of mobile gamers are open to at least occasionally engaging with video ads if they come with in-game rewards, according to a new report from Unity Technologies. The company, which owns and operates the Unity game-development engine, survey more than 2,000 creators and customers to get a sense of how people feel about video advertisements inside of mobile games. The results showed that 46 percent of players prefer incentivized video commercials as opposed to full-screen popups (29 percent), banner ads (20 percent), and standard interstitial videos (5 percent). In a mobile market worth $34.8 billion, figuring out a way to earn money from the huge population of gamers who never put money into free-to-play games is crucial. Unity, which has its own ad platform built into its toolkit, thinks that more developers should begin stepping up to take advantage of this data.

Any time that a player does watch an ad, however, developers get a payment from the marketers. If a game has a few hundred thousand daily active players, this could start generating some serious revenue. 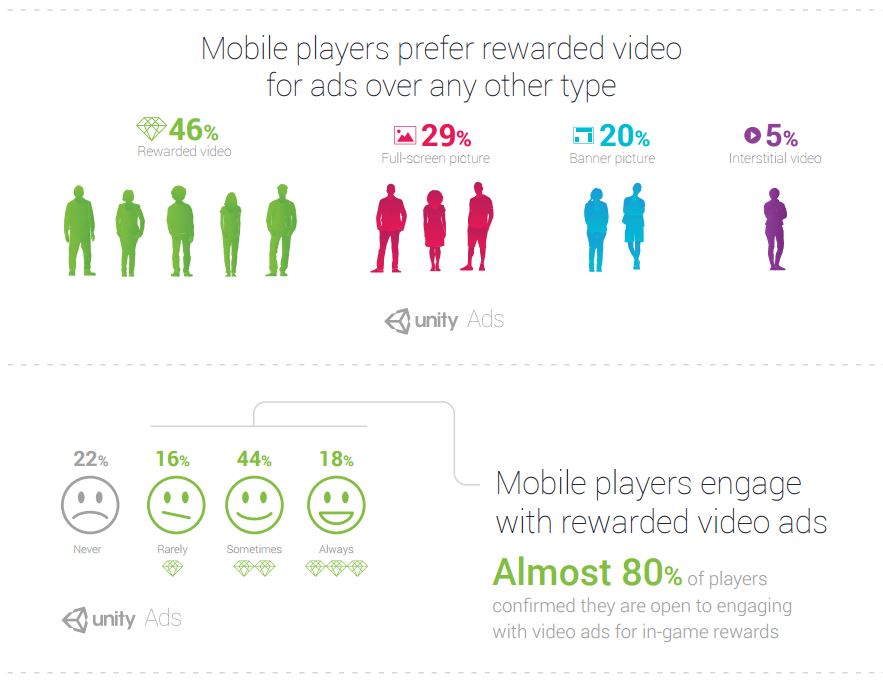 Introducing incentive-based ads isn’t just about generating more revenue, according to Unity. The company also found that 39 percent developers saw their players returning more often and for longer periods of time after introducing rewarded ads. Only 9 percent saw a drop in retention.

For Unity, this is all clear evidence that more developers should use this advertising option. And it, of course, thinks studios should use Unity Ads rewarded-video platform. That’s likely not a tough sell considering thousands of developers around the world already use Unity, and now they have an option (and some data to convince them) to integrate that into their apps.