Unity Technologies has teamed up with Google Cloud Platform in January to create the Obstacle Tower Challenge, which is testing the limits of artificial intelligence in games.

In the first-of-its-kind contest, Google will offer a prize of cash, travel vouchers, and Google Cloud Platform credits, valued at more than $100,000. Now round two of the Obstacle Tower Challenge has begun.

Since the closing of the first round, Unity received more than 2,000 entries from more than 350 teams.

Now the second round begins for eligible teams. For a team to make it into this round, they needed to train and submit an artificial intelligence agent that could achieve an average score of five on unseen versions of the tower.

“As we described here, this was no trivial feat. We want to congratulate the top teams that made it this far and also thank our partners at Google Cloud Platform for providing GCP credits to the eligible teams and AICrowd for hosting the challenge,” said Unity contest organizers Arthur Juliani and Jeffrey Shih, in a blog post. “To go along with this new round of the challenge, we are also releasing version 2.0 of the Obstacle Tower Environment. We’ve expanded the number of floors in the tower from 25 to 100, with these higher floors including many new visual styles, obstacles, puzzles to solve and enemies to avoid.”

Unity has also significantly expanded the customizability of the environment for researchers looking to study generalization in AI. Although only the top eligible teams will move on to round two of the challenge, Shih and Juliani are encouraging everyone to download and try out the latest version. After round two of the challenge, Unity plans to open source the Obstacle Tower Environment. 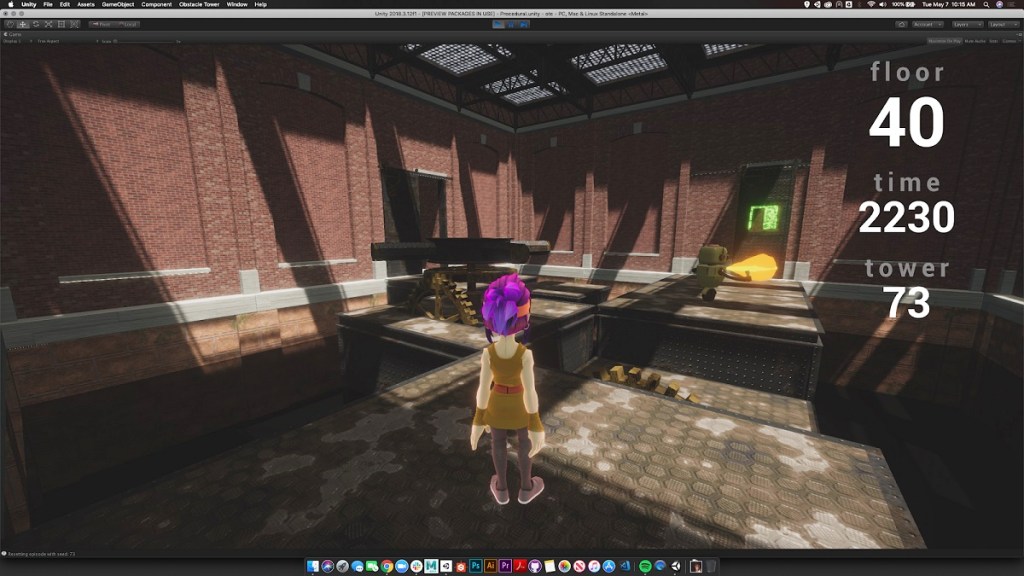 Unity has expanded the Obstacle Tower Environment to further push the agent’s need to generalize across new and unseen combinations and floors. Whereas the original version of the environment had only 25 floors in the tower, this new version has 100. These higher floors contain three new visual styles: Industrial, Modern, and Future.

Not only do the higher floors contain different visual appearances, but they also provide additional challenges. All of the mechanics present in the early floors are still present and expanded upon in difficulty in the higher floors. In addition to those mechanics, the higher floors also contain: enemies to dodge, distracting TVs to avoid, more complex floor layouts with circling paths, and larger rooms on each floor with additional platforming challenges.