Imeem, a Web site that offers playlists of music, has become immensely popular because it’s free — and legal. The music is ad-supported, and imeem keeps adding more music to it’s offering.

Indeed, less than five months after announcing a new distribution deal with Warner Music Group, one of the four big record labels in the United States, imeem has signed deals with all the others: Sony BMG in September, EMI in October, and now Universal Music Group.

While the labels have stubbornly clung to a direct sales model, aggressively rejecting the business plans of most websites, the consensus imeem has struck between them world proves that there is also potential for ad-supported services.

What is imeem’s secret? It appears to be offering the labels high enough payment for their streamed music, where other services, including other social networks, are still grappling with the issue of how to pay the labels. The string of deals is an amazing turnaround for imeem, which was being sued by Warner only seven months ago.

Under the deals, imeem gives each label a chunk of its advertising revenue in return for the right to freely stream any music or videos owned by the labels. (Update: It also pays out a fraction of a cent each time a song is played, according to Dow Jones.) Users upload most of the content from their own computers.

The service imeem offers is unlike radio (represented on the internet by Last.fm and Pandora) in that it allows users to make and share their own playlists, giving listeners another level of control. Imeem also supports video and pictures, most of which is also copyrighted material owned by the labels.

Other competitors like Napster have deals allowing them to use the same content, but are subscription supported. Imeem is the only service of its kind that has managed to wrangle agreement out of the large labels. (Most of the small and independent labels, which imeem also has agreements from, have signed deals with many other websites.)

Although it may appear that the labels are ready to loosen their grip on how their content is spread over the internet, that may not be the case. Only days ago, Universal enacted a 90-second rule for playback of its content on websites like MySpace, apparently worried that listeners were going online in lieu of buying a copy of a recording.

We don’t have the details on exactly how much imeem is paying the labels, but it must be a significant amount. The site’s monthly 19 million unique visitors don’t hurt in getting attention for them, either.

Founder and CEO Dalton Caldwell said the company will now seek to raise ad revenue with targeting, which will be based both on the content (the specific artist a listener is tuned into, for example) and anonymous user data like geographic location.

As in the video industry, the music industry will likely see handful of sites shaping up to be the leaders. Pandora has done well with radio, while iLike is locking in the social networking crowd. Any other sites that you think are likely to succeed? Let us know. 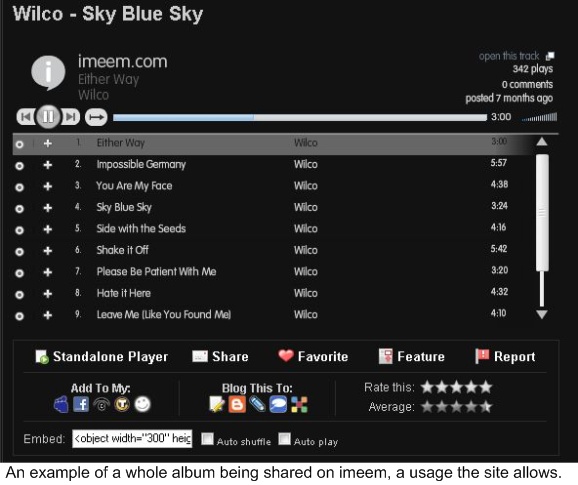