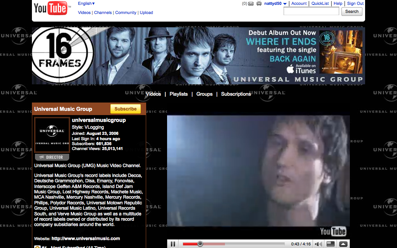 The Associated Press and a range of newspaper leaders trashed online news aggregators large and small earlier this week, calling them parasites and other foul terms and demanding that everyone start paying for doing things like republishing excerpts of news articles (or even paying for any access whatsoever). Those who make a living off the internet responded in kind, even resorting to comparing newspapers and their demands to record labels and their practice of suing people who share music.

And today we have a record label — Universal Music Group — announcing that it has finalized a previously-rumored deal with YouTube to create a new site where you can watch music videos for free. The other major labels are in discussions to join it.

The new site, to be called VEVO (all caps for some reason) is currently just a landing page at www.vevo.com. For now, you can sign up for email updates or follow it on Twitter. But it promises to let you watch music videos from top bands as well music videos from YouTube users. It won’t just be a standalone site, though, as there will also be a “VEVO” dedicated channel on YouTube and some sort of branded video player. The existing Universal channel on YouTube has more than 3.5 billion views.

These companies are hoping to cross-promote users to the new site and make money off of advertising revenue targeted at these users, which they’ll split. Revenue sharing, ad formats and other specifics of the agreement haven’t been disclosed (you can read the press release here). It may include using the ContentID targeting technology that YouTube introduced last year to help target relevant ads within videos. Universal also says it plans to introduce other forms of making money to the site, including merchandise and concert ticket sales — basically, forms of revenue that make money on top of freely distributing videos to the public. YouTube just expanded its Click-to-Buy option to eight new counties yesterday to let users buy songs and DVDs right from within YouTube pages.

But can VEVO make enough money to help out Universal, the other labels — and YouTube (which some people continue to question the viability of, even though it’s slowly making more money)? Indeed, Sony is in talks to sign a deal to bring movies to YouTube, as well. So the value in this for YouTube isn’t clear, but from Universal’s perspective, things seem to be improving, according to Bits:

[UMG chairman and chief executive Doug Morris] said that over the last few years, Universal has gone from losing $70 million a year in the production of music videos for promotion, to earning roughly that amount now. He said Vevo would be the next step in monetizing music videos with technology from Google and YouTube and content from Universal. “It is going to be a powerful product,” he said.

We don’t know how much Universal has been making off of YouTube already, but what it has learned is that free distribution comes with its own business models, and it’s getting good enough results to experiment with them more. And that’s something critics of news aggregators should think about more.