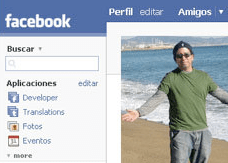 Facebook has just announced how they plan to offer the site in other languages. The Palo Alto, Calif. company has both hired professional translators and asked its international users to give suggestions.

The strategy is markedly different from rival social network Myspace, which has done all the translations for localized versions of its site itself. Facebook’s strategy may prove to be a way of translating to any language in the world quickly and cheaply.

First, Facebook employees built a Facebook application called “Translations” and asked users on networks such as “Madrid” or “Berlin” to help them translate pages. Facebook is already being translated in Spanish, French and German.

The application also includes a voting system so users can decide what translation of a language they prefer.

In translated versions, all content that users create in their native languages — status, birth date, political views — will appear in that language on the site. Translators also have the option of reporting inaccurate translations, or less-than-fluent translators.

The idea of community-generated translations on Facebook raises the question of whether or not slang will make it into official Facebook versions, especially when you consider that the majority of Facebook users in many countries are college students or younger. For example, one could imagine Spanish for friends, amigos (see screenshot), getting replaced by slang terms like güey if enough voters wanted it that way.

The effort is going well, the company says, with several thousand users having added the application already. The three new language versions of the site will become available before the end of March, the company expects, and then further languages will be added.

News of this application leaked out before now, but not all the details of Facebook’s plan were clear. At the time, I wondered how Facebook was compensating users for their translations … Looks like it isn’t.