I recently did an article comparing 14 web and mobile applications that offer live TV, and want to make two updates.

First, little did I know, I left one out: Nowlive, a company that has an alternative business model to the usual ad-base fare — the company is already generating revenue. More in a sec.

Second, Mogulus, one of the companies I included in my comparison, has just raised $1.5 million more in venture backing from undisclosed investors, bringing its total to $2.7 million. Beet.TV’s Andy Plesser has the news. It was one of my two favorites: It’s the best of the bunch, from an ease-of-use perspective for the creator. This is the one that lets you”storyboard,” which allows for more TV-like content as users can drop recorded videos into the feed at cue and overlay graphics such as logos or titles. I’ve embedded a player below from Mogulus which carries [update: the embed isn’t working; VentureBeat’s software, WordPress is stripping it out for some reason; but here’s a link to] the channel following Scoble around the CES show.

Nowlive, meanwhile, allows users to not only stream video directly to the Nowlive website, but also to a facebook app (very impressive), or to their Myspace or other Web page. It also allows users to host a live call-in show, a feature I haven’t seen anywhere else. A user can start a live TV show, as well as participate by call-in to an existing show. You can upload media directly into some one else’s show (assuming the show host approves the content/call).

The business model: building live show technology for third parties, such as radio shows, film studios and other media houses. It has created such shows for the Writer’s Guild, Sony Pictures, radio shows in Utah and Los Angeles, where the company is currently based. [Update: Nowlive creates, produces and distributes the show for customers like Sony Pictures, or licenses the technology to a radio show like x96 in Utah, as well as help with distribution. ]

The Writers Guild used Nowlive to run a few shows about the on-going Hollywood writer strike featuring notables like comedian Sarah Silverman, and for Sony Pictures they hosted the event, moderated the chatrooms, provided the cameramen, and created a custom video platform for the Grauman’s Chinese Theater red carpet event for the movie “Walk Hard.”

CEO and Co-founder Kevin Bromber is the first to admit that Nowlive’s home page design is a “bad choice” (check out the partial screenshot below, it’s pretty loud), but the company has shown it can recognize a problem (what Kevin calls a “gut check”) and change directions: It’s already scrapped two original ideas, one where it allowed users to send photos from mobile phones to the web site, and another where it planned to host a live radio show from a physical studio with in-person guests (so old school).

Bromber’s ideology approach — building for third-parities — is a rarity in an industry that is often criticized for relying on page views and unique visitors than revenue.

“I don’t want to be another guy out there without a business model,” Bromber says.

Bromber is one of the few players in live TV who survived the Web 1.0 days; he co-founded 3DGreetings.com (3D Planet inc.) with John Hallorand which, after its users were sending 150,000 e-cards per day, was acquired by toy-maker Mattel in March of 1999.

Hallorand, Bromber and David Eike parlayed their savings into a roughly $100k investment to start Nowlive in January 2006, raised $500k from family and friends, and in March last year, received $1 million in Series A financing, from Clysedale Ventures.

Bromber says he hatched the idea after watching the newspaper’s slow response to blogging, as well as ability for musicians to use the internet to go directly to consumer without a label. “The same trend is happening in all media,” he says.

Nowlive, which will be profitable “early next year,” built an extensive VoIP backbone network to be able to handle the call-in feature, which Bromber thinks is essential to the company’s success. “A show is more than sitting in front of a web cam,” he says.

With a redesign in the works, as well as some more deals in the works with major media companies, look for Nowlive remain a contender. 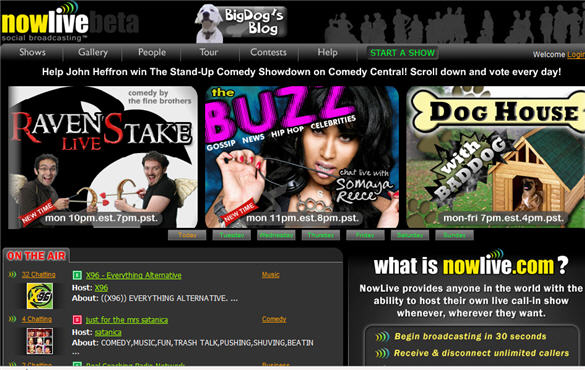