In a bid to focus its business, Upsight has sold its PlayHaven ad network to digital marketer Science Inc. Terms of the deal weren’t disclosed. But from what we’ve been able to discern, the deal is an interesting case study in whether a business should be vertical, where it owns everything it needs, or is horizontal, where if focuses on a piece of the business and then partners with others who provide the rest.

For Upsight, which recently combined two companies in a vertical move, the sale of the ad network represents a shift toward becoming more horizontal.

“These patterns always move in ebbs and flows,” said Andy Yang, the chief executive of Upsight, in an interview with GamesBeat. “There’s aggregation and fragmentation. We are trying to build a vertical stack, but not where it doesn’t make sense and it is completely closed.”

Since Upsight has focused on being a consolidator in the mobile analytics and marketing business, it may seem strange that Upsight is selling off its ad network so soon after the formation of the San Francisco company through the combination of PlayHaven and Kontagent last winter. Back then, the companies said they were combining to become a one-stop shop for mobile marketing services for game developers and publishers.

But Yang said that this deal makes sense given the nature of business. Kontagent supplied the world-class analytics, and PlayHaven had the mobile marketing platform to transform the analytics into action. PlayHaven had notification services and ways for a game maker to target players with promotions that could increase engagement and retention.

By itself, analytics had become a commodity, as other companies were giving that service away. Yet analytics, when combined with other services, could become critical to mobile game companies that wanted to understand their customers and take actions to serve them better.

But PlayHaven’s ad network was one of dozens available, and it represented a kind of conflict of interest, Yang said.

230 app developers with 9,000 apps and 397 million MAU
told us what works best in mobile user acquisition.

Game developers often want a choice of ad networks when they promote their games, since they often seek specific kinds of customers that different ad networks can reach. PlayHaven itself offered only one ad network, and it couldn’t credibly recommend the best possible ad network for a given developer if it operated its own. In the name of preserving neutrality, Upsight is selling off the piece of its business that could cause that conflict of interest, Yang said. This way, ad networks can participate on top of Upsight’s platform, and game developers will be able to choose the right ad network. 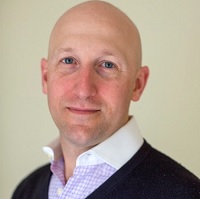 Above: Jason Rapp of Science Inc.

Upsight has also turned to another vendor for an important piece of its business. Kontagent’s access to mobile user data was cut off by Facebook earlier this year after an investigation found that Kontagent held onto the data longer than it was permitted. So Upsight made up for that loss by cutting a deal with Berlin-based Adjust, which still has access to the Facebook data. With proper “attribution” information from Adjust, Upsight can tell its developers where their best players are coming from, as a result of advertising campaigns with various ad networks.

“Attribution is a key area that is well served, so we are partnering there,” Yang said. “We see ourselves as the next generation of enterprise services.”

Ultimately, Upsight is also focusing its business on getting access to world-class analytics and then putting it to work. Upsight is focusing a lot of energy on Data Mine, a product from Kontagent that enables data experts to access the raw data behind the analytics and then use it to predict what will happen with customers. Once the experts have that insight, they can then use Upsight’s mobile marketing tools to take some action, like giving free virtual goods in the name of returning players who are about to quit a game. This kind of insight and action is important to developers, and Yang believes it makes Upsight indispensable to game makers.

With this focus, Upsight can also expand to other markets. Upsight’s rivals now include Mixpanel and Localytics.

Jason Rapp, the managing director of three-year-old Science Inc., said in an interview that PlayHaven’s ad network is more transparent for its customers. He said Science Inc. will continue to invest in new solutions for mobile advertisers and publishers who want better user acquisition and ad monetization. Science Inc. will combine its Chirp Ads mobile ad business division with PlayHaven. Altogether, Science Inc. has 135 people.

Science Inc. has backed companies like men’s grooming brand Dollar Shave Club and pet services marketplace DogVacay. With PlayHaven, Science Inc. now adds customers like Glu Mobile, creator of the Kim Kardashian: Hollywood mobile game. While there are hundreds of ad networks out there, Rapp said his company liked PlayHaven because mobile gaming is hot, the PlayHaven ad network is profitable, and it is fully transparent.

“They monetize for publishers, and deliver for advertisers,” Rapp said.