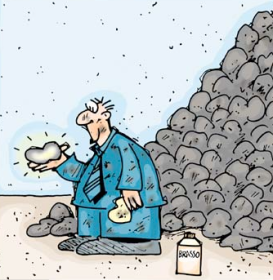 The U.S. Department of Energy announced that it will provide $27.6 million in funding to 19 different projects testing the efficiency of underground carbon dioxide sequestration as a potential strategy for reducing greenhouse gases and preventing global warming.

Coal is still the most plentiful source of energy in the U.S., with the plants that use it churning out 80 percent of the country’s carbon dioxide emissions. Any effective, affordable technology capable of slashing this output could make a major impact on air quality and America’s environmental reputation. For now, the DOE is primarily concern with assessing the risks posed by underground capture.

In addition to the $27.6 million ponied up by the department, the project developers involved have produced matching funds of $8.2 million. The bulk of the money will be used for small-scale demos and simulations that will determine how best to funnel carbon into underground storage, as well as whether or not it will leak.

Most of these projects are based at universities, including Stanford ($1.2 million), Montana State University ($405,000), Columbia University in New York ($1.6 million), the Colorado School of Mines ($1.6 million) and Princeton ($2 million). Companies receiving money include Schlumberger Carbon Services ($2 million), Fusion Petroleum Technologies ($2 million) and Planetary Emissions Management ($2 million). All of these amounts are those received only from the DOE — the distribution of matching funds varies, and you can see the full list of recipients, sums and projects here.

Carbon sequestration is an often heated topic in political and environmental arenas. A strong, supportive contingent argues that coal will persist as a major supplier of energy for many years to come, so efforts to limit its damage are vital. Their opponents contend that so-called “clean-coal” technologies will only prolong its use and suck up federal funds that could otherwise go toward development of renewable sources of energy like solar, wind and geothermal.

For now, it seems like the government is siding with the proponents of carbon sequestration — though the amount allocated isn’t staggering when compared to the $4.5 billion earmarked for smart grid initiatives, or $2.4 billion set aside for advanced battery companies. One thing’s for sure — to move forward at all, carbon capture projects will need help from the government. They are highly capital intensive, with a high rate of trial and error. The DOE says that this initial investment is only the beginning of billions of financing that will probably be used to research and commercialize carbon capture methods.

Already, the DOE has said it will give $1 billion to the FutureGen Industrial Alliance to build a clean coal power plant in Illinois. The 275-megawatt plant is the pet project of the consortium, which includes 11 energy companies. Planners say that technology included in the plant will capture up to 60 percent of the carbon dioxide it emits during coal combustion.