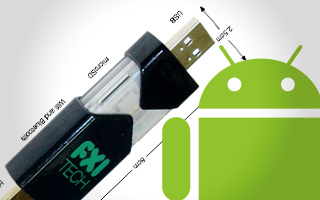 Remember that $25 computer-on-a-stick we showed you a couple months ago?

This gadget might seem familiar: It’s a dual-core computer on a USB drive, and its makers say it’s all about computing from any screen, anytime, anywhere.

The drive, called Cotton Candy, will turn any screen you connect it to into an Android station. You can plug it into a TV, a tablet, a laptop (PC or Mac) — you name it.

The device’s maker, FXI Technologies said in a statement that Cotton Candy was designed to “bring cloud computing to almost any screen.” In a word, it could help to make an “Internet of Things” more feasible than ever before.

In addition to giving consumers easy access to cloud-based games, files, documents and computing, Cotton Candy was also intended to speed up the adoption of smart screens, extend the lifetimes of common computing hardware, create a single point of content storage and decrease the overall cost of computing while increasing security.

It’s a tall order for such a tiny device:

Now, for the specs: The Cotton Candy prototype weighs just 21 grams and is equipped with an ARM Cortex-A9 (1.2GHz) CPU and an ARM Mali-400 MP (Quad-core) GPU. It has Wi-Fi and Bluetooth connectivity options, as well as an HDMI output for HD graphics on any screen. The computer can be controlled via mice, keyboards, smartphones and other USB peripheral gadgets.

It runs an Android OS (no word yet on version number; we expect to see Ice Cream Sandwich on final, mass-market devices due to its one-OS-fits-all premise) as well as Ubuntu, and it features virtualization software for Windows, Mac and Linux.

As for the name, LXI CEO Borgar Ljosland wrote in a blog post, “The reason is that it was the most similar existing object that describes somewhat what it is doing: a stick connecting a cloud to your hand!”

Right now, FXI Tech is giving prototypes to manufacturers in the TV, storage, PC, smartphone, auto and appliance industries, to name a few.

Expect to see Cotton Candy sticks floating around at retail outlets during the second half of 2012. Pricing hasn’t been set yet.