LOS ANGELES — Mike Zyda, a professor at USC Viterbi School of Engineering’s computer science department and director of the GamePipe Laboratory at USC Games, has counted the number of games that have been shipped by alumni from USC’s game program. So far, it’s more than 790 million units. 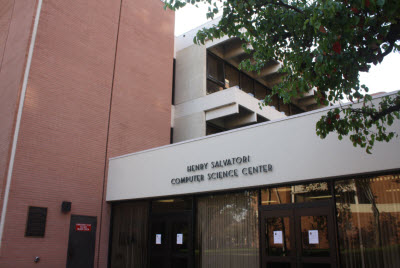 This year’s Advanced Games class is building seven games with teams ranging from 15 students to 60. The teachers include Zyda; Laird Malamed, chief operating officer at Oculus VR and a part-time instructor at USC; and Scott Easley, a two-time Emmy winner in animation and former Pixar animator.

“We guide them a lot with their ideas,” Easley said in an interview. “Yet these are 100 percent their games. They have their personal signatures on them. I think that’s one of the great things about the program. There’s a lot of love and passion in these projects.” 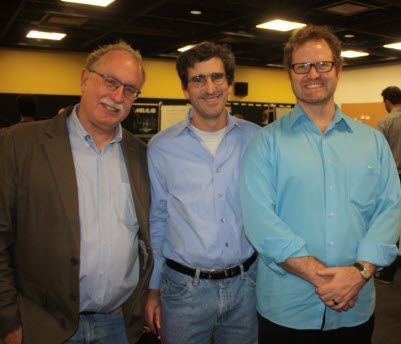 Above: Mike Zyda, Laird Malamed, and Scott Easley of USC.

If the students publish games based on their work at the school, they enjoy the benefits. But that’s not the sole purpose. The teams mix together programmers, artists, and designers.

“The point of the class is team dynamics,” Malamed said. “We are happiest as teachers when they have problems. That’s the most opportune time to learn. That’s what you’re going to have in real life.”

The class is so big that it is spread across three buildings in the engineering, computer science, and cinematic arts schools. Each room is crowded with students, backpacks, monitors, game development machines, and controllers. The chatter is incessant on Thursday afternoons when class is in session. In these classes, the teachers don’t give lectures. The students just collaborate and build. They iterate and try to get better and better game performance on their hardware. They show their work to the teachers, who can quiz them about whether they’ve studied similar games from the past.

The teams apply to get their ideas approved and recruit teams over the course of a summer. Then they work for two semesters building the games. By the time of a spring Demo Day — an event attended by around 600 industry people — the games usually have about two to four hours of game play. There are dozens of hiring tables at the event each year.

Games that are intended for the commercial market may still take a lot longer to finish. And that’s where game companies can come in and hire the teams.

“The games are industry quality in ideas and are good for their size,” Malamed said. “Very few of them are exceptionally large teams. But a few have spun out and become published games.” 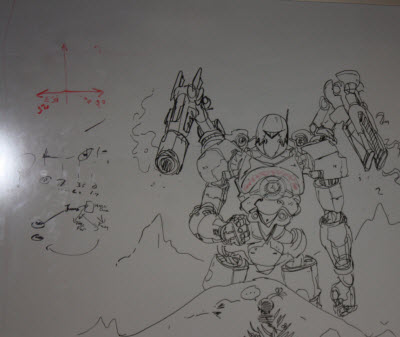 Above: A game character on a USC whiteboard

In 2000, Zyda created the Moves Institute at the Naval Postgraduate School in Monterey, Calif. His team built America’s Army, a first-person shooter whose purpose was to recruit players into the military. One of his students on that team was Mike Capps, who went on to become president of Epic Games, the creator of the Unreal and Gears of War blockbusters.

Zyda joined USC in 2005 to start an interdisciplinary game program. His first student joined Activision. Now it has turned into a major feeder for local companies like Activision and Electronic Arts LA.

Normally, professors want to get undergrads into graduate programs. But that’s not Zyda’s goal. He wants to get game developers into jobs at local companies by the hundreds.

“We’ve pumped a bunch into the game economy,” Zyda said. “The goal of this program is to feed the game industry’s demand for new hires.”

One of the most famous studios that came out of USC was Thatgamecompany, which made groundbreaking Sony PlayStation 3 titles Flower and Journey. The team included Jenova Chen and Kellee Santiago. While at USC, they developed an award-winning game called Cloud. Chen went on to work for Zyda on a serious games project before he moved on to Thatgamecompany.

With 790 million units sold at an average of $15, USC games graduates have created perhaps $40 billion in retail sales. Of that, they may be directly responsible for maybe 10 percent, or $4 billion.

Titles like Rhea, a virtual reality game built with Unreal Engine 3 and Oculus Rift, are more designed to push the edges of interactivity.

“The students are excited about using the Rift,” said Malamed.

But Bloom is something altogether different, a beautiful adventure-platformer game that is being built by a team of 60 students. It is a giant exercise in project management, which is a skill the students will be able to take into their first jobs.

“I’m pretty sure we wouldn’t be able to do this at any other school,” said Khaled Abdel Rahman, a student and team leader on Bloom. “It’s like a game development studio in real life.” 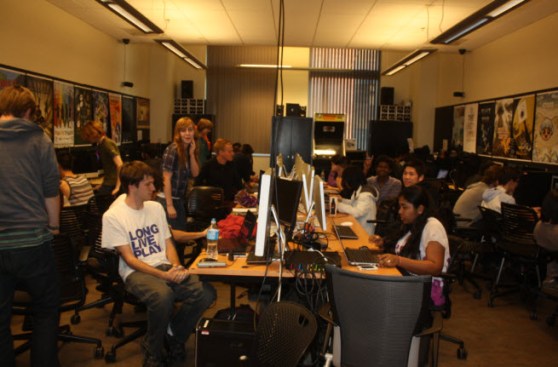