The adoption of iOS 8 has been slower than with previous operating systems since the update became available for Apple devices yesterday, according to data collected by mobile monetization firm Tapjoy.

The new version of the mobile operating system debuted to a claim from Apple that it was “the biggest iOS release yet.” (VentureBeat’s review calls it “a solid upgrade.”) The advance hype about iOS 8 has been good, but Tapjoy found that the adoption rate is much slower than the adoption of iOS 7 in its first day.

Tapjoy observed its network of 200 million unique iOS consumers a month and found that the adoption rate is slower in part because the release schedule for the software and the hardware is different. Both the iPhone 6 and iPhone 6 Plus will not be available until Friday in the U.S. The download also takes up about a gigabyte of space, which could be burdensome for those who take a lot of videos or pictures. 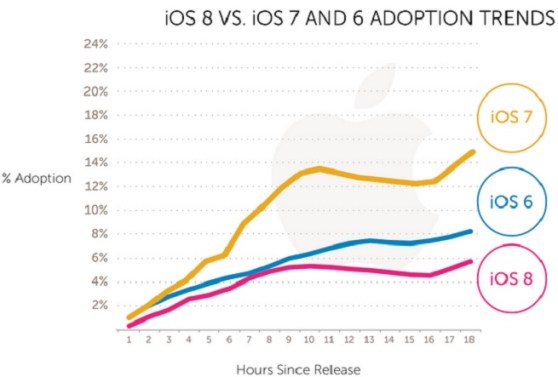 While it took seven hours for iOS 7 to reach 10 percent adoption, iOS 8 was at 6 percent more than 18 hours after its initial availability. After 18 hours, iOS 7 was at 12 percent.

The iPod Touch users are leading the way on adoption for iOS 8, in contrast to iPhone owners for past launches.

By country, the top downloaders of iOS 8 are in South Korea, followed by the United States, Russia, Brazil, the United Kingdom, and Mexico. 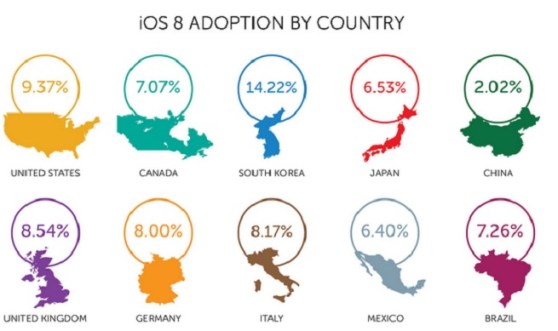 Above: iOS 8 adoption by country