At Dashbot, we’ve processed almost 700 million messages through our platform.

One of the interesting aspects of conversational interfaces is the unstructured data users send through bots — everything from text to images, stickers, video, audio, links, location maps, and more.

We took a deeper look at images and stickers sent to Facebook and Kik bots on our platform during the month of December.

Stickers are more than just an image  —  they’re communicating feelings and emotions.

As you can see for both Facebook and Kik, emoticon stickers tend to be most popular… along with cats!

Analyzing the types of stickers provides an opportunity to better respond to users, which can increase user satisfaction and the overall engagement in your bot.

The gift of animated gifs…

Similar way to stickers, animated images are another way of communicating emotions and feelings.

These are the most common animated images based on number of bots and number of messages, respectively:

Most Common Gifs (based on number of bots):

Most Common Gifs (based on number of messages):

Want to chat? Here’s my selfie…

In the case of images, about 37 percent of Facebook bots and 62 percent of Kik bots receive images.

We ran the images from December through Amazon’s Rekognition API for image detection. The API outputs labels detected with the confidence level of detection. We filtered the labels further to look at labels with greater than 90 percent confidence level.

The most common labels for images based on the number of bots receiving them are listed below: 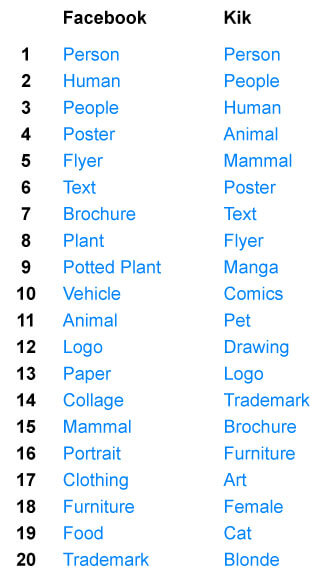 For further clarity, on the labels:

An interesting takeaway with Kik is that Comics, Manga, and Drawing rated more highly than in Facebook.

Why are these important?

This is another opportunity to better understand your users. Why are they sending images, and what’s the context of the images? This is also an opportunity to provide support for images, which can increase user engagement.

As an example, we had a customer who didn’t realize the number of images being sent to their bot and initially ignored them. Once they saw the quantity, they started responding and acknowledging the images, creating a personality for the bot that resulted in an overall increase in user engagement.

Is there a gender bias?

In the case of Facebook, we can further drill into the labels based on gender. Here’s what we found: 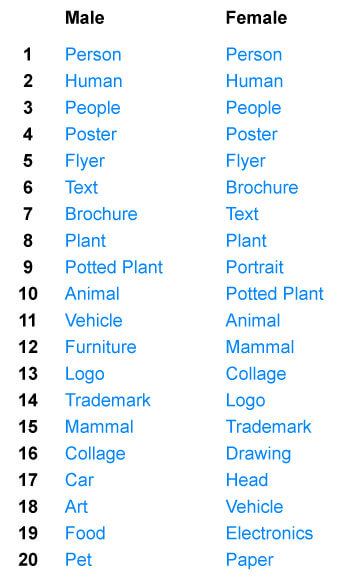 In the case of images from female users, we see more Portrait, Collage, and Head labels, which generally are applied to Selfie-type photos. Even the Electronics label is often triggered by the phone in the image when taking a selfie in a mirror.

For images from male users, there are slightly more labels around Vehicles/Cars, and the addition of Food and Pets.

My eyes, my eyes!

Lastly, we took a look at NSFW images  — our poor eyes  —  these aren’t for the faint of heart.

In the case of Facebook, both male and female users send NSFW images, although it leans heavily toward male users  —  of the NSFW images, around 90 percent were sent by males.

The interesting thing is, while it’s a small number of users and images, the users send the images a lot!

Arte Merritt is the CEO and cofounder of Dashbot.io