Beyond the celebrity life updates and the 140-character fights about pretty much anything under the sun, Twitter can actually be helpful when it comes to things like mapping earthquakes.

Twitter and a group of researchers at Stanford teamed up to see how tweets could help create more accurate mappings of earthquakes. Currently, “ShakeMaps” are produced within minutes by the U.S. Geological Survey using recordings, a simple ground motion prediction equation, and geological site correction factors.

Interestingly, the maps are continuously updated as new information emerges, including qualitative first-hand accounts of the earthquake collected from online surveys, and this is where Twitter comes in:

To help improve the accuracy of ShakeMaps, we used all geo-tagged Tweets around the world containing the keyword “earthquake” or “tsunami” in several languages that occurred in the first 10 minutes following Japanese earthquakes of magnitude 6 or greater from 2011 to 2012. We found that the model with lowest error was based on a combination of earthquake and Tweet-based features, such as local site conditions, source-to-site distance, and the number of Tweets within a certain radius. Ground shaking intensity estimates from our model are comparable with historical recordings and conventional estimates provided, for example, by USGS ShakeMaps. 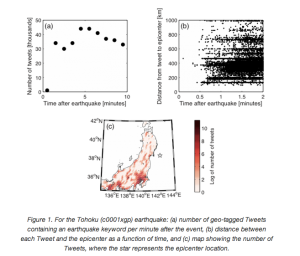 It then trained several models using these features to create maps that incorporate its tweet-based data.

This is just one of the cool ways to use tweets as a source of real-time data for real and helpful projects.

Naturally, tons of marketing tools harness tweets to analyze consumer sentiment about brands or news, but it’s always nice to see how Twitter can help make the world a safer place — literally.