Fate chose me today for a dip into the Dark Side of the Force as I did a demo of Vader Immortal: A Star Wars VR Series today at F8 in San Jose, California.

Vader: Immortal debuts as one of over 50 launch games for the Oculus Quest wireless virtual reality headset on May 21, and it will come to the wired Oculus Rift as well. Fans of both virtual reality and Star Wars are looking forward to it. The wireless headset gives you a sense of freedom we’ve never had before, and that makes swinging a lightsaber feel cool.

The new experience (which Oculus doesn’t call a game) comes from Disney/Lucasfilm’s ILMxLAB, and it features Darth Vader in a story-based experience. The demo showed only a part of the game, but the trailer above also shows a great deal. 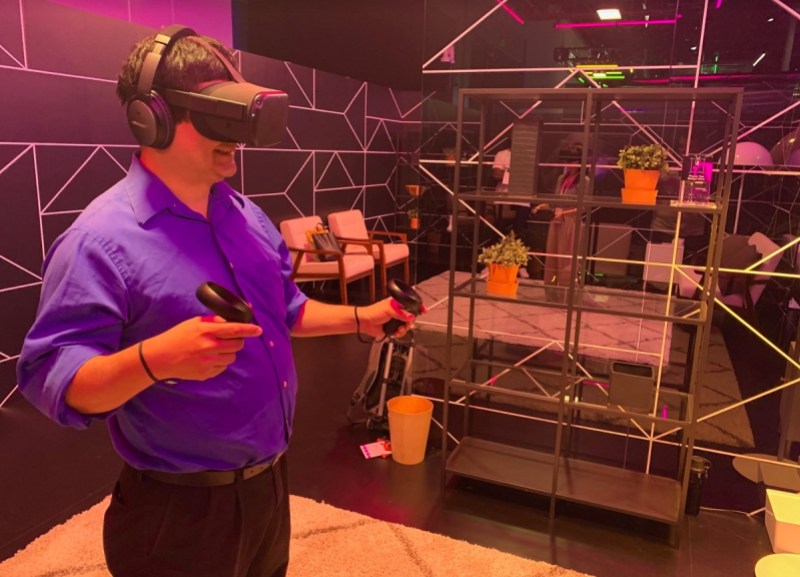 Above: GamesBeat’s Dean Takahashi gets ready to swing a lightsaber in Vader Immortal.

The graphics look great. I had to gear up in the Oculus Quest, which has pass-through video for its headset cameras, which makes setting up a free space for your VR experience easy. In a demo area at Facebook’s F8 event, I put on the headset, headphones, and the new Oculus hand controllers.

The demo started with a ball-like torture droid floating in front of me. It moved out of the way, revealing an Imperial officer who had a kind of cyborg face. He counseled me not to anger Lord Vader. Then the doors opened, and Vader came into my room with dramatic fanfare.

He asked me to open a kind of magic box. I fiddled with the thing with my Oculus Touch controllers and eventually figured out how to open it. I was able to look around in a 360-degree environment, but I had to make sure I opened the box before Vader got pissed. I did so, and Vader mentioned that I might be the one he was looking for.

After that, the scene switched to a training space. I picked up a lightsaber before me and held the trigger. A blue light beam materialized, and I started swinging it around. I was in another medium, swinging a lightsaber that made buzzing noises.

Then one of those floating Training Remotes from the original Star Wars movie appeared. It started darting around and began to glow red. That was my cue to raise the lightsaber and fend off its laser bolts. I blocked the first one, and it bounced back at the ball, destroying it.

I did this again a few times. But then two balls appeared, and they zapped me from different directions. Blocking then became harder to do, as I didn’t have eyes in the back of my head. Next, a mechanical contraption appeared and released a training droid with a red lightsaber. It did a lot of maneuvering and then closed with me. I was able to anticipate its moves easy enough and blocked. And when it got close enough, I swung my arm and sliced it, and it fell apart with a satisfying crashing sound. I got a two out of three score on the training level.

I did this some more, and then the training went into higher gear. Two balls and two droids came at me at the same time. I started swinging wildly, occasionally panicking, and getting hit. But I kept on taking out the balls and the droids, slashing like a crazy man.

The experience ended. Darth Vader didn’t come fight me in this demo. But I got a taste of what it is like to swing a lightsaber with close, accurate tracking, and graphics that looked pretty good. I only had to wait a few decades for this experience.

Will it be transformative for VR and gaming? We’ll find out when we get our hands on the full experience.