Online video continues to bring in more and more eyeballs as people are stuck at home. But that has also led to a huge launch for Riot’s competitive shooter Valorant, which is then also feeding back into growth for Twitch. Valorant and Twitch have formed a symbiotic relationship that is enabling both to grow stronger in terms of engagement and interest. And that was obvious in the viewer numbers for the game on Twitch in April, according to data-tracking from StreamElements and Arsenal.gg.

Fans watched 334 million hours of Valorant on Twitch last month. That makes it by far the most popular category on the video site throughout April. Riot was able to amp up interest for the game by letting select streamers into the closed beta. But then it also took advantage of those partnerships by giving people a chance to get in as well if they watched one of those livestreams while logged into Twitch and a Riot account. Valorant hit a peak of 1.7 million concurrent viewers on April 7.

“Valorant and its milestone-setting numbers illustrated that the days of launching a game by just seeding it with top influencers have definitely changed for those who want to optimize the livestreaming landscape,” StreamElements chief executive officer Doron Nir said. “By enabling only select streamers in the closed beta to offer beta key drops that allowed other gamers to take part, those beta keys became the key to success for attracting gamers and audiences, while acting as a great proof of concept that there are still new ways to leverage technology to elevate the impact of a game.”

You can see how this is a win-win for everyone involved. Twitch and partner streamers get huge viewer numbers. Riot, meanwhile, optimizes its marketing spend.

Twitch is up significantly as people continue to avoid public gatherings

While Valorant is a huge accelerating factor for Twitch’s growth, it’s obvious that more people are just looking for affordable entertainment at home. Many countries around the world are still dealing with COVID-19 and the coronavirus. In response to that, hundreds of millions of people are avoiding contamination by staying home.

Once you rewatched The Office for the fifth time, maybe it’s time you check to see what is happening on Twitch. And a lot of people are doing exactly that.

“The shelter-in-place mandate has clearly elevated the amount of livestreamed hours watched, bolstering an industry that already had a solid upward trajectory,” said Nir. “Time spent watching livestreams has not only grown significantly month-over-month, it has grown almost 100% year-over-year, with our expectation that it’s going to continue to be a major vehicle for entertainment in the years ahead.” 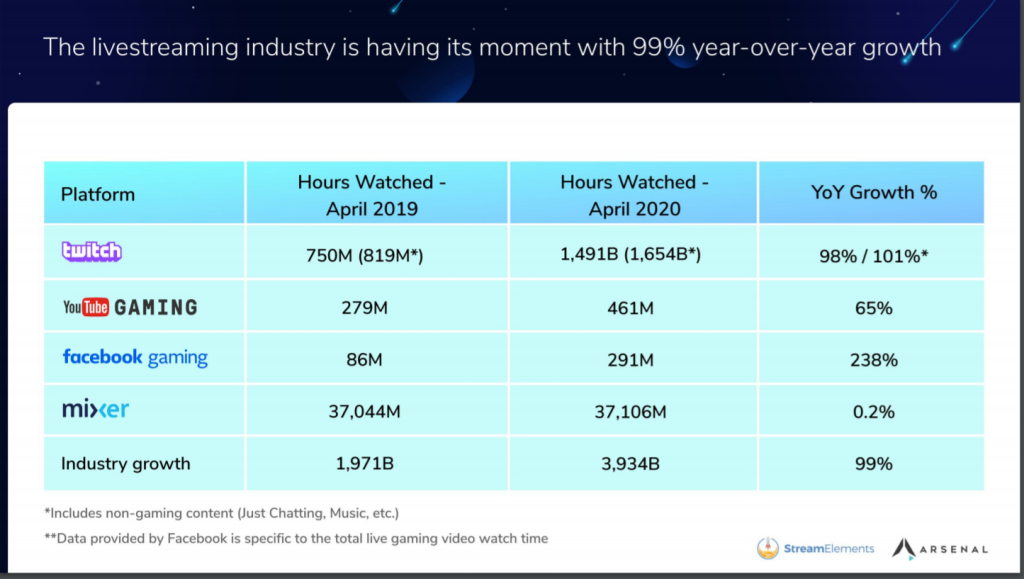 “Among the biggest livestreaming platform success stories is Facebook Gaming,” said Nir. “The recent launch of its standalone gaming app and multiple celebrity-driven tournaments has managed to drive its numbers up. And Twitch’s successful Stream Aid concert cemented it as a premier platform for musicians and other performing artists. With gaming, music, and other large pop culture events most likely to be relegated to digital formats for the rest of this year, now is the time for brands to double down on highly strategic online initiatives that leverage the latest tech to go beyond the basic.”