When Paradox Interactive acquired tabletop role-playing company White Wolf Publishing in October 2015, I and many others wondered how long it’d be until we’d hear about a new Vampire: The Masquerade game. Turns out the answer is three years.

Thursday, Paradox announced its publishing Vampire: The Masquerade — Bloodlines II, the sequel to the acclaimed 2004 role-playing game from the defunct Troika studio. It’s coming to PC, PlayStation 4, and Xbox One in 2020, and it’s under development from Seattle’s Hardsuit Labs. Brian Mistoda, who made his name in gaming as a writer for the original Bloodlines, is the narrative lead for this new Vampire project.

Bloodlines II’s setting is Seattle, the home of Hardsuit Labs. You start as a “thin blood” — a baby vampire. You have no clue what’s going on, and you find yourself the star of a vampire inquisition even before you know what you’ve become. Vampires are’t just hungry — they’re political and social beasts. And in Bloodlines II, you must navigate this complicated world as you lean how to live and grow as a vampire.

Vampire: The Masquerade is part of White Wolf’s “World of Darkness” RPG setting, where werewolves and other monsters live among us. This horror setting never reached the heights of Dungeons & Dragons, but it’s had a dedicated following for decades, and Bloodlines is one of the best CRPGs of the early 2000s. But late last year, White Wolf’s CEO stepped down.

I interviewed Mitsoda and Hardsuit Labs cofounder Andy Kipling earlier this week at the Game Developers Conference 2019 in San Francisco. This is an edited transcript of our interview. Above: Blood on your hands. Blood dribblin’ off your chin.

GamesBeat: Why bring Vampire the Masquerade: Bloodlines back now?

Brian Mitsoda: First of all, a lot of things have to happen to get a game going. I will say it was definitely something—as soon as Paradox acquired the World of Darkness IP, it just so happens that the creative lead at Hardsuit Labs, Ka’ai Cluney, who is a good friend of mine, went in and convinced Andy and [cofounder Russel Nelson], the owners at Hardsuit Labs, to pitch a game to Paradox. He texted me and asked me, Hey, do you want to work on Bloodlines II? Of course I was like, I dunno? It’s been a while. Let me think about it. But by the end of the conversation we had some ideas going. We started working on the pitch, and we pitched it a few months later to Paradox, who were very interested in doing a Bloodlines II. It was a big reason they bought the IP. We pitched the game. We’ve obviously gone through some gates to get here, but here we are. That’s on the production side. That’s why it has been made.

But to answer your question from a player’s standpoint, it’s one of the bigger cult games out there. There’s been a huge demand for a return to the world, to have a sequel to the original Bloodlines, and not just a sequel in name, but a sequel in the feel and look and everything about it. This is very much a game that we’re making to be exactly like the Bloodlines you remember, but for 2020.

Andy Kipling: If I were to add to that, I’d say that one of the things for us as a studio is empowering our people, following their lead on the things that speak to their passions. When Ka’ai Cluney basically busted into my office with the news that Paradox had acquired the World of Darkness, the first thing he said was, we need to talk to Paradox. Do you know anybody over there? I said, I do, but what are you thinking? He said, we’re gonna pitch Bloodlines II. I’ve got Brian on board. We already have things going. Let’s send a quick email. I said, OK, that’s coming out of left field, but let’s go. It seemed very organic.

But within two to three months, suddenly the balls were rolling in ways I hadn’t fully anticipated.

Christian Schlütter: From the Paradox side, when we acquired the World of Darkness IP, we very much considered Bloodlines the crown jewel of that. There are lots of small IPs within the World of Darkness, but Bloodlines, with us being a video game company, was the one thing we absolutely needed to bring back. Then we also needed to bring it back right. We anticipated it would probably take some time. We’d have to do some other things first. But then these guys came with a pitch and it was too good. We couldn’t pass up on it, especially with Brian being on board, and having that true successor feeling to it.

Kipling: My assumption was that Paradox had plenty of plans already in place. I said, I don’t know what you’re planning, I assume you guys already have things locked in stone, but I don’t care what your plans are, we’re pitching you a game and that’s it.

Schlütter: For an independent studio, pitching a game like this is fairly risky. The idea is that you can only pitch it to one publisher, because we own the IP. You can’t put all that work in and just take it to a different publisher.

GamesBeat: Brian, what was your role on the original game?

Mitsoda: I was a designer and writer. I ended up being pretty much the lead writer on the project, doing most of the dialogue in the game. It was a very small team on the first game. I generally had a hand in a lot of different things. Mostly the quest design hubs and writing. It was kind of, what can you take on? That was the first game. For this one, it’s narrative lead, so anything that touches the story is something I’m overseeing.

Kipling: Which is a lot of the game. The game is a narrative-driven action-RPG. The quest design, the storytelling, all that stuff, is primarily driven by the narrative. Brian has a lot to say on that.

Schlütter: It’s fair to say that Brian is and was the heart and soul of Bloodlines.

GamesBeat: Did you work on any other Vampire games?

Mitsoda: No, the only Vampire game I worked on aside from this one would be Bloodlines one.

GamesBeat: What other action-RPGs or RPGs have you done since then?

Mitsoda: I’ve had an interesting trajectory. [Laughs] Quite a few games I worked on were cancelled. That’s always a thing that happens in game development. I worked on an iteration of Alpha Protocol at Obsidian, but I didn’t finish that one out. I opened my own studio as an independent and did a game called Dead State. For the last three-and-a-half years I’ve been working with Hardsuit. 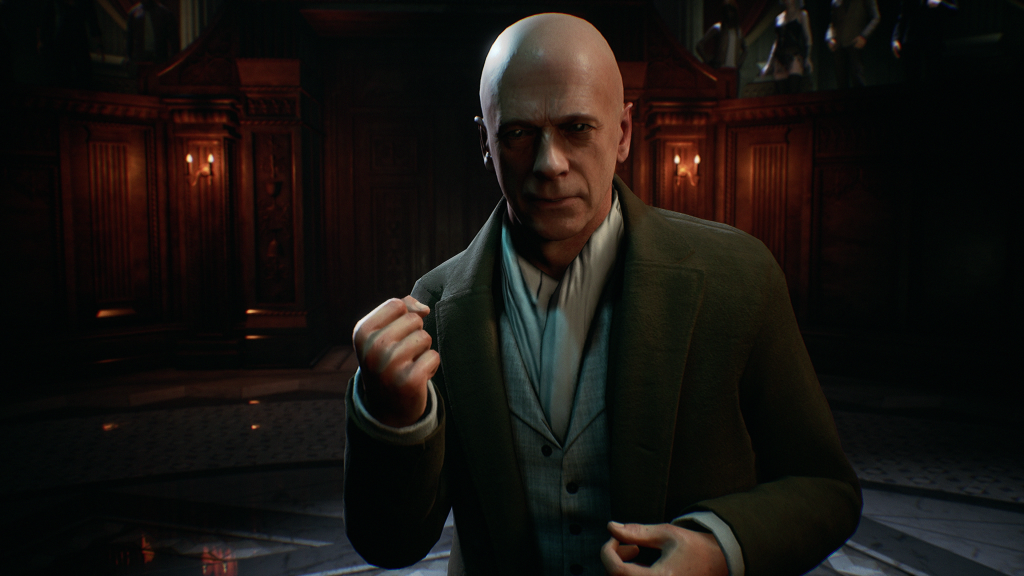 Above: The Inquisitor runs quite a show.

GamesBeat: What is Hardsuit Labs known for?

Kipling: We started as about 18 people, close to five years ago, with basically the core goal of trying to do development differently than everyone else, really fighting against the staffing up and staffing down realities of our industry. Which meant valuing our people and really making sure we have the right people in place to do the right things. We started out fairly small, sort of bootstrapping our way up, doing a lot of port work, but knowing that we always wanted to be a game developer. Making sure we had a core team in place to build around, both in art and design. That’s where Ka’ai Cluney, our creative director, and Luke Dodge, our art director, came in. Both were there when we started. We caught a number of breaks along the way as far as allowing an independent studio like us to survive and continue to grow.

Like I said earlier, the first big project we had the opportunity to work on was Bloodlines II, and that came as a result of a confluence of opportunities, and then seizing those opportunities at the right time. From there we built the Bloodlines team with industry veterans, bringing them in to our studio, building up the team in general, while maintaining the culture and the team we had when we started. Prior to that we’d done a lot of work for a lot of other studios, which gave us a lot of opportunities to learn from other people’s mistakes. That was something Russ and myself valued highly, because there are a lot of mistakes in the industry. Striving to not repeat those is a key goal.

GamesBeat: When did you start work on Bloodlines II?

Kipling: Paradox purchased the World of Darkness in November of 2015. That day, when the news broke, Ka’ai was already driving the creative direction of the game. Then Brian came on board. We had, not a playable pitch, but a built-out world by February, when we pitched it to Paradox at DICE. We wanted to get ahead of GDC in particular, when there are tons of game pitches and all that stuff. We didn’t actually start full development until July or August. The problem is that Swedish companies take the entire month of July off. Were we gonna get a signed contract before they go on vacation for a month, or somewhere between?

But we spent all of that time, beginning in November, starting with Ka’ai and Brian and slowly building more and more, building up the art direction. And Luke for look and feel. By the time we signed had all of the core story and locations and a lot of the things around which we could build the core product.

Mitsoda: I don’t think I’ve ever had a game come together this fast. We literally just—it was over a couple of different sessions of sitting down and talking story, fleshing it out, that we developed the story very quickly and the systems very quickly. It was kind of unparalleled compared to any other development I’ve been on.

Mitsoda: We’re based there. It’s kind of writing what you know. I think one of the other reasons we like Seattle as a setting is that it’s really underutilized in TV and movies. Most of the time TV and movies will go, it’s in Seattle, and it’ll be shot in Vancouver, and then they CGI in the Space Needle.

Seattle has a really interesting history. It’s founded by pioneers and criminals. It’s one of those places that, if you’re a local, you have all these spots you know about, all this history you know about. But in general when it comes to Seattle, everyone just thinks of the Space Needle or the pier or Pioneer Square, all the tourist destinations. We wanted to show the greater part of Seattle, show multiple different locations and really touch on modern Seattle, how we look at it.

Kipling: It also benefits from lack of sunshine, generally being a fairly moody city in that regard. Which ties directly into the art direction and the noir aspects. Tying in the supernatural history of Seattle, which is what Brian spent however many months writing and re-writing, and pulling in those darker elements. The way Ka’ai refers to it, it’s like the dusty corner of the United States where all this crap collects over the years. That’s how the city was originally founded. It was a very blue-collar city. It had a lot of criminal underpinnings to start. Obviously recently there’s been a lot more white-collarization of it, if you will.