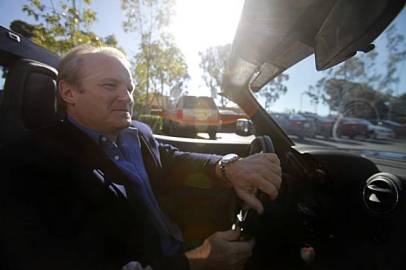 I just sat down with Alan Salzman, CEO of VantagePoint Venture Partners — perhaps better known today as the top venture capital firm investing in Tesla Motors — to see how he’s feeling about the big win, and what it might mean for VPVP’s growing green strategy.

As you can imagine, he was pretty pleased yesterday, watching Tesla’s stock close 40.5 percent above its initial pricing of $17. His firm offered 238,748 of its 7.13 million shares (about 9 percent of the company) in the sale, raking in a little over $4 million. But Salzman dodged congratulations on the lucrative exit.

“Getting congratulated on something like this is like a man being congratulated when his wife gives birth,” he said, passing credit to the team that built the company, particularly in the early days, when VantagePoint first invested in 2006.

But Salzman seems sincerely less enthusiastic about the payoff than he is about what Tesla’s technology might accomplish.

“What I hope is that Tesla’s success reflects the public’s enthusiasm for electric vehicles more broadly,” he said. “Look at the oil spill in the gulf, the difficulties in passing climate legislation and the asinine assault on AB 32 [the California Assembly bill that would establish a price for carbon]. You see this sea of despair, but the reaction to Tesla is a positive beacon.”

As Salzman sees it, it’s impossible to connect Tesla’s current performance — its losses and slow sales (which he readily acknowledges) — with its now massive $2.2 billion valuation, without recognizing the company as the vanguard of major changes in transportation yet to come.

But how did VantagePoint spot this potential four years ago, when Tesla didn’t have any tangible products, and none of the sex appeal? Salzman’s answer: It didn’t. In fact, in early discussions about the company, many at the firm worried that Tesla would be to VPVP what the Segway was to Kleiner Perkins Caufield & Byers: a funding sink hole that has become more of a punchline than a product.

“Our view and analysis gave us some confidence that you could make an EV using off-the-shelf components — that the technology had gotten to the point where it was possible to do what Detroit was still saying was impossible,” Salzman said. “We invested in Tesla because we believed the Roadster could be done [the company’s first, $109,000 electric vehicles], and that once it was done, it would no longer be possible for the rest of the automotive industry to deny its existence.”

At the time, Salzman hoped the company would become an industry catalyst, just like Ford’s Model-T was at the start of the 1900s. Just like Ford, Tesla is not the first in its field, but it has a chance to lead a wave of new electric transportation infrastructure — the same way Ford led the wave of mass production in the U.S.

And lo and behold, Tesla has already become this catalyst, in Salzman’s opinion.

“It’s no coincidence that from the day the first Roadster rolled onto the street, it took no more than three years for Nissan to debut the Leaf [its all-electric vehicle] for less than $25,000,” he said. “Certainly the speed with which the Leaf has appeared was directly impacted by Tesla. I mean, if a bunch of Silicon Valley engineering types can put out a car like the Roadster, why can’t the major automotive makers? The answer is, they can, and now they will.”

But Tesla’s electric vehicle technology isn’t just a harbinger of change for existing carmakers — it’s a call to action for everyone involved in transportation infrastructure, particularly fueling companies. This attitude gave birth to one of VantagePoint’s newest, high-profile investments: Better Place.

Based down the road from Tesla in Palo Alto, Calif., Better Place is working to roll out a new type of fueling station for the forthcoming droves of plug-in cars: a station where you can switch out your depleted lithium-ion battery for a fully-charged unit and continue on your way.

“After we invested in Tesla, we thought long and hard about the missing links needed to make EVs broadly popular,” Salzman said. “Better Place is about providing the systems and environment to make owning an EV a seamless, simple experience. Basically, Better Place is to Tesla what iTunes was to mp3 players.”

This model would give carmakers from Tesla to Nissan to General Motors the permission to shrink the massive, unwieldy and expensive lithium-ion battery packs they are currently installing, Salzman explained. As it stands, batteries contribute more to both the weight and the price of most plug-in cars, while simultaneously reducing their range and speed.

“Our approach to cleantech is to invest in accelerating the inevitable. Solving this problem is inevitable,” he said.

Another Salzman inevitability: the transition to a completely electric transportation system. Why? Because it would actually be cheaper, he claimed, while sketching out some rough math.

Basically, it takes 0.25 kilowatt-hours to travel 1 mile in an EV. One kilowatt-costs an average of 11 cents in both the U.S. and Europe — that’s less than 3 cents a mile. The average internal combustion engine vehicle gets about 20 miles per gallon of gasoline. Assuming a gallon costs $3, every mile driven costs 15 cents. Based on this logic, driving an EV saves you a surprising 12 cents per mile. At this rate, a battery pack could pay for itself after less than 100,000 miles.

On top of that, making and maintaining EVs is less expensive than internal combustion cars too, Salzman said. They are usually smaller and lighter, requiring less material, and engaging fewer components that could degrade or break.

But if all this is true, why are so many people balking at the slightly higher price tags on plug-in vehicles? According to Salzman, consumers are still stymied by upfront costs. In his view, including the price of the battery in the overall price of an EV is like including the cost of 10-years-worth of gas in the price of any internal combustion engine car.

“If you can amortize the cost of the battery over the duration of an EV’s life — just like we do with gas today — you will see that electrifying transportation is way cheaper,” Salzman said. “This is Better Place’s model.”

But transportation isn’t the only area of cleantech where VantagePoint and Salzman want to upend a dying, monolithic industry. The firm’s other major green play is in lighting — highly energy efficient and long-lasting light-emitting diodes (LEDs) that are only now beginning to be used for general illumination (they have already become popular choices for backlighting television and computer screens).

“Here you have another antiquated industry using products developed centuries ago that sucks 22 percent of the electricity generated in North America and Europe,” Salzman said. “LEDs are 85 percent more efficient — creating enormous savings in electricity and money.”

When asked how LEDs, which remain costly at $50 to $60 per bulb (and there are very few bulbs that are bright enough on the market), can possibly challenge cheap, efficient compact fluorescents, Salzman had a snappy comeback:

“The quality of light is terrible and they contain toxic amounts of mercury. The saying is ‘Save money, live better,’ not ‘Save money, die sooner.'”

That said, most consumers don’t care about these issues as much as their budgets. That’s why LED makers need to drop prices fast. Even a bulb price of $25 — while higher than competitors on the market today — could go a long way toward wider adoption of LEDs. All of a sudden, buying a bulb that can last 10 years (versus the 2 to 3 year duration of CFLs and incandescents) starts to make more sense at that price point, Salzman said. Within a decade, he expects all general lighting to have switched over to LEDs. 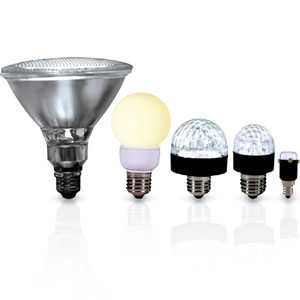 The big challenge for the startups in this business, like VantagePoint portfolio companies BridgeLux, glo AB, and Huga Optotech, is that so many huge, traditional lighting makers are getting involved in LED technology too. Both General Electric and Philips recently announced the development of LED bulbs equivalent to 40 to 60-watt incandescents.

But Salzman is unfazed.

“In the 1980s, you had a bunch of giants in computing like NCR, Wang and even Honeywell, but then these little PCs popped up radically changing the industry and leading to the demise of huge Fortune 100 companies,” he said. “When Amgen and Genentech started no one thought they stood a chance against the likes of Merck and Pfizer, but today the pharmaceutical industry has been transformed into a biotech industry. We’ve all seen it happen.”

In fact this David vs. Goliath storyline is something VantagePoint boldly pursues as part of its cleantech strategy. Just look at its investments in unique wind design firm FloDesign Wind Turbine, next-gen fuel maker Cobalt Biofuels, advanced battery maker Premium Power, and more. Almost all of its cleantech portfolio companies are carving out niches in areas with powerful incumbents.

Still, Salzman is unwaveringly certain that the sector will see its own Google, Amazon or Cisco Systems emerge in the next several years.

In the meantime, there is nothing wrong with partnering with the big players in order to get the little guys some traction. This is something the VantagePoint team also proactively encourages. We saw it with Tesla signing deals with Daimler and Toyota. BrightSource Energy, the firm’s major solar investment, is getting a hand from Chevron, Bechtel, Southern California Edison and Pacific Gas & Electric. Partnerships like these have become a very effective way for cleantech companies to drive up scale and volume while driving down costs.

VantagePoint, like the other big firms staking claims in green — Kleiner Perkins and Khosla Ventures chief among them — is not shying away from capital-intensive deals, despite trends in the venture industry. It’s sticking with companies, despite high manufacturing costs and years of development, because it sees the opportunity for massive returns on good ideas, Salzman said.

Tesla seems to fall into this category for VantagePoint. But is it too early to see the company’s success as a good sign for the cleantech sector in general? Salzman thinks so.

“I hope Tesla demonstrates the enthusiasm that exists for novel green and clean technologies that have the ability to scale into big businesses,” he said. “But right now it’s a single data point. As much as I would like to put a positive spin on it all, it’s going too far to think that this is the start of the trend. So far, Tesla is unique.”