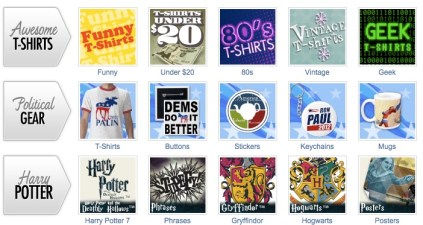 Companies that let customers design their own products are becoming the next big thing. Just three months ago, I wrote that this trend of “customer co-creation” was one to watch. But it may prove even hotter than I thought. Since publishing the story, I’ve seen quite a bit of new funding activity in the space.

Albert Wenger of Union Square Ventures probably explains this phenomenon of mass customization the best: “We’re pretty convinced that mass-market consumer products are now so cheap and widely available that they’ve lost a lot of their appeal. We think people are looking for something unique and customizable. We’re interested in the social fabric — bringing people together that design things, and people who want to buy them. Mass produced goods are dominated by a few large brands. But everywhere you look there are movements seeking to bypass those brands, whether it’s the locavore movement in food, or something such as NikeID, which has seen double-digit growth year over year.”

Mass customization ventures are attractive to VCs not just because they’re seeing tremendous growth. As it turns out, a scalable build-to-order supply chain model is also very cost-effective — sometimes even more so than a conventional mass production model. And because co-creation sites are seeing viral growth, they promise low customer-acquisition costs.

Here are some examples of recent VC-funded mass customization companies, as well as a few that have shown impressive traction in the past few years:

Gemvara
Gemvara lets you custom build jewelry online. Earlier this year Gemvara received $5.2 million in a funding round. Its revenue has doubled each month since its launch in February 2010, and it expects to close the year with more than a $10 million run rate.

Fashion Playtes, a web store that lets girls aged 6-12 design their own clothes online, just raised $4 million in its first institutional round of funding led by Fairhaven Capital Partners. The service’s popularity with the tween market has grown by more than 600 percent in the past year: The site had 5,700 unique visitors in August of 2009 and is averaging 35,000 visitors a month today. Investor Scott Johnson explains, “Fashion Playtes’ mass customization strategy brings the power of social networks, multiplayer games, and modern custom manufacturing to the $11B+ tween apparel market.”

Shapeways
Union Squares Ventures and Index Ventures were part of a $5 million investment into mass customization company Shapeways this year. This Dutch company lets buyers customize 3-D printed wares — and hopes to be the Kinko’s of 3-D printing.

Chocri
Major chocolate maker Ritter says it invested in “the low seven figures” in Germany’s Chocri, a site that enables the co-creation of chocolate bars. You design it using a product configuration tool on their site, and Chocri mails it to you from Europe. The cash infusion will help Chocri scale its operation by optimizing its fulfillment process.

Polyvore
Polyvore’s design tool serves as a virtual styling tool, letting you mix and match clothing products from your favorite online stores to display your own “outfit” to the world. Polyvore’s tagline is “Clip + Create + Shop + Share = Polyvore.” Other users vote on the outfits with as many as 400,000 “likes” added daily. With 30,000 style sets being created every day, Polyvore now contains 20 million sets in its database. The company has raised $8.7 million in funding since 2007. (Incidentally, Polyvore recently underwent a management reshuffle. CEO Sukhinder Singh Cassidy resigned last month over disagreements about the company’s direction, and cofounder Pasha Sadri has taken on the chief executive position.)

Zazzle
Kleiner Perkins led Zazzle’s $16 million first round in 2005. This mass customization vendor lets you design your own bumper stickers, T-shirts, mugs and posters that you or others can buy (see image at top). Zazzle reports that it has 20 million unique visitors per month, 31 billion unique products available, and has grown 1,600% in traffic and 900% in sales in the past four years.

CafePress
Zazzle competitor CafePress also lets customers build their own bumper stickers, T-shirts, mugs and posters. A profitable company, it doesn’t depend on venture funding. It received a second round of funding in 2005, the last serious investment in the company, according to a timeline on its Web site. Available merchandise surpassed the 150 million mark in 2008.

Threadless
In October, crowd-sourcing T-shirt site Threadless.com celebrated 10 years of giving artists the opportunity to design shirts and have them scored by the Threadless community. Winning designs are sold through the online store. The company generated $30 million last year.

Modcloth
This innovative online retailer secured $19.8 million in a second round of financing this year, the company announced in June. Modcloth’s innovative “Be the Buyer” service lets visitors vote on which clothing styles Modcloth should put into production. Modcloth’s sales grew 17,000% between 2006 and 2009.

With growth rates like 17,000 percent over three years, it’s not a huge surprise that VCs would see the writing on the wall and invest heavily in the mass customization model.

Dave Sloan is CEO of Treehouse Logic, which offers a hosted design tool solution that enables customer co-creation. You can reach Dave at dave@treehouselogic.com and follow him at  www.twitter.com/treehouselogic.