Mainstream venture capitalists pumped up startups in virtual and augmented reality in the third quarter, with a record $2.3 billion invested in the last 12 months, according to tech advisor Digi-Capital.

Tim Merel, managing director of Digi-Capital, said that half a billion dollars was invested in AR/VR startups in the third quarter. That was the ninth consecutive quarter of increased investment in the hot sector, which Digi-Capital estimates could be a $120 billion business by 2020.

While angels and smaller VCs led the early rounds of investment, AR/VR is now being driven by major Sand Hill Road VCs and corporate investors. Mainstream VCs accounted for 65 percent of dollars invested in the quarter, while corporate investors made up 21 percent. 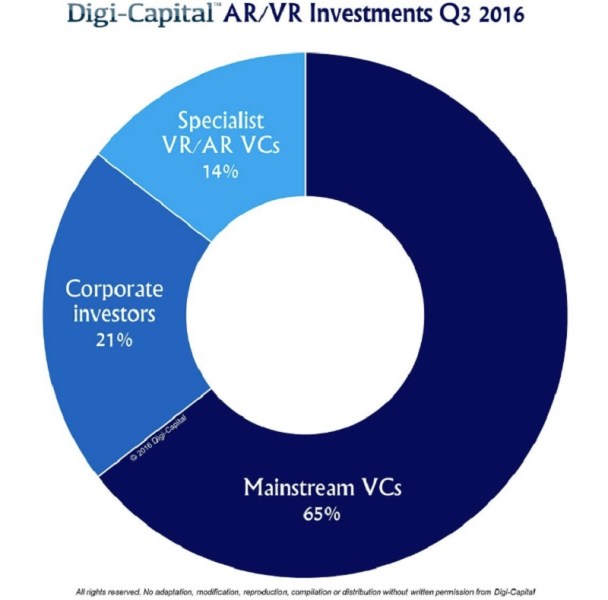 The average investment was $9.3 million, or $16.4 million excluding seed deals, during the quarter.

Excluding Magic Leap’s massive rounds in 2014 and at the start of this year, the overall growth trend for AR/VR investment has now been on an upwards trajectory for over two years, Merel said. 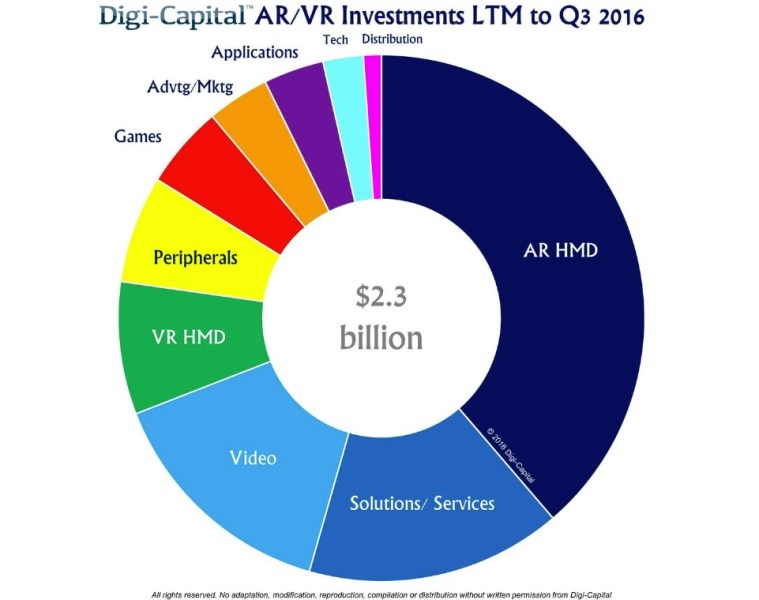 Above: A lot of sectors are hot for investment in AR/VR.

As investment has continued to grow, the balance of where the money is going has become broader, according to Digi-Capital. While Magic Leap’s $793.5 million round was astonishing, it took less than $4 of every $10 invested into the market. VR/AR solutions/services was the next-largest category, with video following close behind, including NextVR’s $80 million round from heavyweights like Citic, NetEase, and Softbank.

“As the AR/VR market goes through the well-trodden path of hype cycle, facing reality, liftoff and maturity, the smart money is looking to the long term,” Merel said. “VR will be big. AR will be bigger (and take longer). While exact market timing is impossible to predict (as evidenced by the unanticipated success of Pokémon Go), folks who know how early-stage investment markets work are betting increasingly heavily on AR/VR’s potential.”