Despite their recent surge in popularity, smartwatches can be traced back more than two decades–when the likes of Timex Datalink (in 1994) or Samsung’s “watch phones” (in 1999) helped plant the seeds for future innovations.

However, the modern smartwatch era was kickstarted, so to speak, in 2013, by the Pebble and its record-breaking crowdfunding campaign. In the two years since, it seems every company from Acer and Apple to BlackBerry, Qualcomm, and Toshiba have brought a smart timepiece to market. But many of these devices have suffered from the same problems: They’re ugly, have low battery-life, or both.

This is where London-based Vector Watch (“Vector”) comes in, with an attractive array of 12 smartwatch models across “Performance,” “Contemporary,” and “Classic” styles, each promising 30-day battery life.

The Vector collection varies in look and feel, with some geared toward swanky suit-and-tie affairs, and others you could just about get away with on an afternoon jog in the park. Prices range from $249 all the way up to $399, depending on the model.

VentureBeat managed to grab some hands-on time with the Luna Performance model, a slick-looking timepiece that’s also water-resistant up to 50 meters, which means this baby is fine to swim with.

As with many other smartwatches, the Vector Luna feels big and “weighty” on the wrist — but that’s not necessarily a bad thing. This heft does give it a premium feel, and is far more noticeable than on the first version of the Pebble smartwatch, which is what I normally wear. 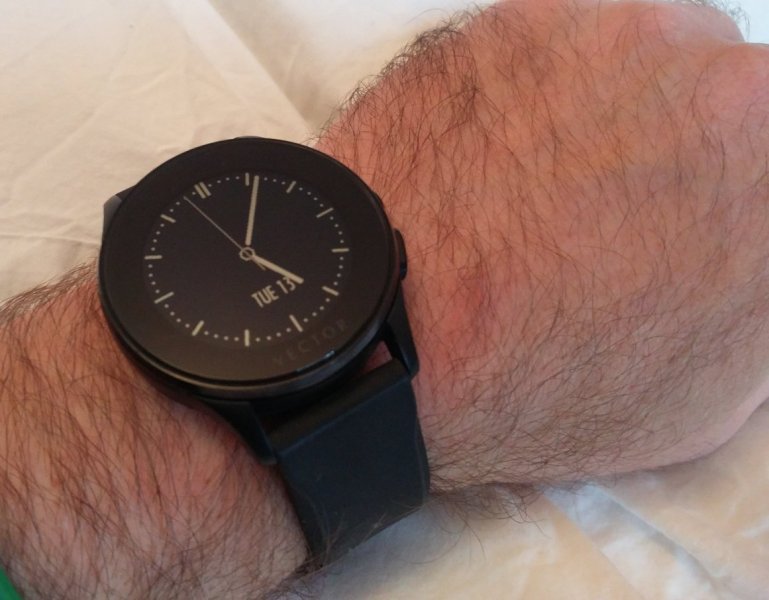 The Vector range is fairly simplistic in terms of features — once you’ve connected the watch to your phone via the dedicated Android or iOS app, you can view things like calendar notifications, “streams” — stocks, time zones, weather — and activity-tracking, which measures steps, calories, sleep, and distance to  help you configure daily fitness goals.

Then there’s the time — an oft-forgotten element of smartwatch functionality. You have a range of watch faces to choose from, which you can change from within the mobile app — you can actually swipe through and see the watch faces update in real time on your wrist. 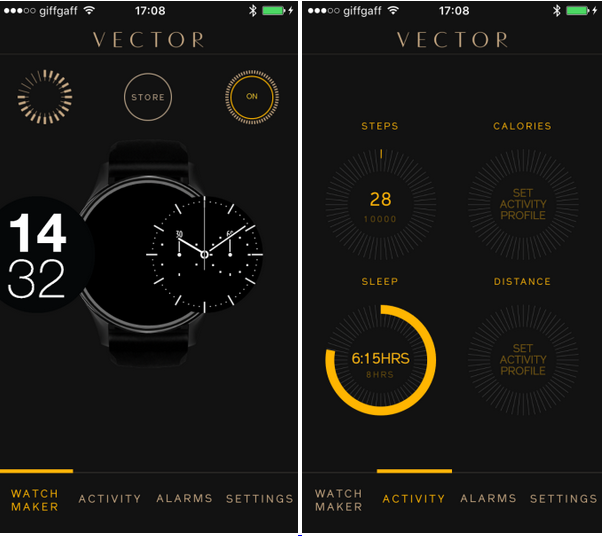 In terms of notifications, the Android and iOS incarnations of the app vary a bit, but the sum effect is about the same.

In the iOS app, you can elect to “mirror” your phone on your watch, whereby anything that comes into your phone is reflected on your wrist. Or you can switch that feature off and choose individual apps to turn on — likely the preferred option for most people, unless you want your wrist buzzing with every single email, tweet, and breaking news alert. 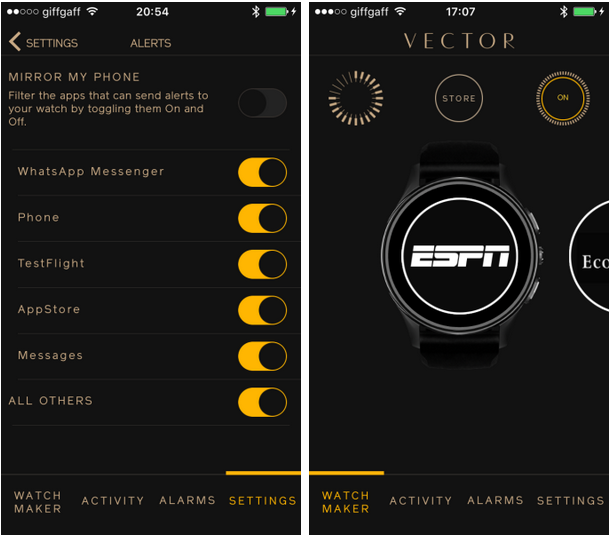 The Vector app also comes with a series of additional “apps” for third-party services, such as The Economist, ESPN, and BBC World News, each of which has been developed in-house.

And this hints at a potential future problem — Vector will have to build up sufficient steam to encourage developers to create more apps for the smartwatch, or else the company will have to build them itself, based on the available open APIs. 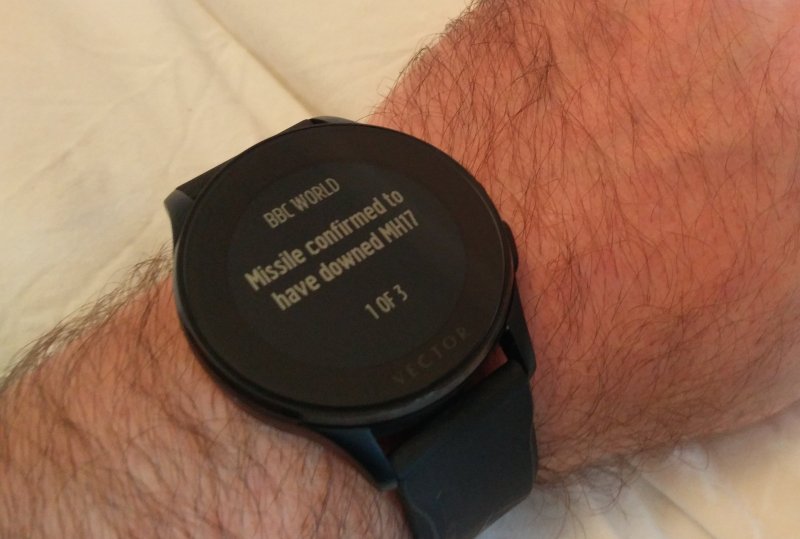 It’s worth noting here that the Vector smartwatch seems very much geared toward at-a-glance information, and is not suited to reading long messages. You can see a few lines of text, but there doesn’t appear to be any way to “scroll” to read more.

Another factor worth pointing out is that the vibration on the Vector Watch feels very weak on the wrist, certainly compared to the Pebble. This may not be to everyone’s liking.

Oftentimes, it feels as though there is a concerted effort to “will” smartwatches into existence, even though they don’t seem to be catching on in the mainstream. Only 4.6 million smartwatches shipped last year, compared to more than one billion smartphones, to put this market into perspective.

Nobody wants to view photos on their wrist, and attempts by the likes of Will.i.am to transform smartwatches into mobile phones haven’t helped the cause, either. Going forward, which features are omitted will be every bit as important as which are included; otherwise smartwatches will struggle to ditch their “gimmicky” reputation.

And this is where watches such as Vector’s could succeed. The company doesn’t try to treat the watch as a “second screen” — it’s designed for notifications and quick alerts. Battery-life is often cited as a downside of smartphones, and for good reason. You’re lucky if you get a full 24 hours from your Apple Watch, which is a problem for many, and Samsung’s new Gear S2 promises only a few days. The original Pebble watch regularly served up 5-7 days, which is on the acceptable level of the spectrum.

Vector has worked to minimize power consumption by keeping the screen simple — dark, with no graphics. Whether it can continue to innovate, gain mind-share, and appeal to the fashion-conscious mainstream market remains to be seen.