After a strong 2014, exits for venture-backed startups cooled significantly during the first three months of this year, according to the latest report from the National Venture Capital Association and Thomson Reuters.

The quarter had 17 IPOs of venture-backed companies that raised $1.4 billion. That’s down 54 percent by number of IPOs and 58 percent by amount raised. That’s the first time in 2 years there has been a quarter without at least 20 venture-backed IPOs.

To make things worse, M&A activity also lost momentum. In the first quarter of 2015 there were 86 venture-backed M&A deals, with 16 of those reporting a total value of $2.1 billion. That’s also the slowest pace in two years.

“With such a blistering pace for venture-backed exit activity in 2014, it was only a matter of time before we saw a drop in activity,” said Bobby Franklin, president and chief executive of NVCA. “Despite the decline in venture-backed IPOs for the quarter, a lot of promising young companies made their debut on the public markets with many more waiting in the wings.”

The news was particularly rough for tech-focused companies. Of the 17 IPOs, 13 were from the life sciences. Leading the way in the quarter for tech was Box, which raised $201.2 million when it went public on January 22.

With a growing number of tech companies accepting late-stage funding to remain independent and private, it’s not likely these deal numbers will change significantly any time soon. Still, Franklin sounded optimistic that exits could return to a more robust level later in the year, giving investors some hope that they might start to see some better returns.

“With 54 venture-backed companies having already filed publicly for IPOs and many more confidential registrations already in place, we are optimistic that the pace for venture-backed exits will pick up steam as the year moves ahead, creating opportunities for everyday investors to be shareholders of innovation,” Franklin said in his statement. 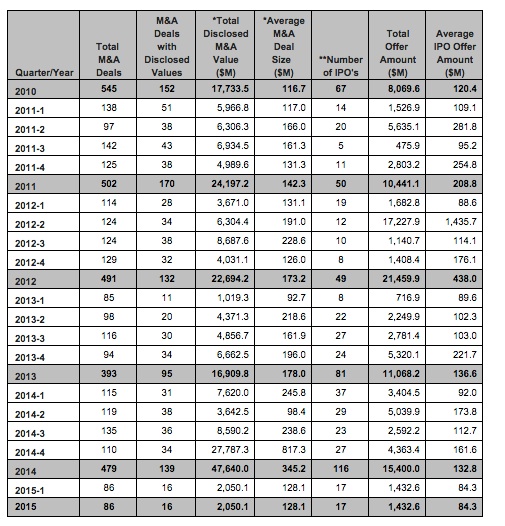 Above: The first quarter exit numbers from NVCA and Thomson Reuters were grim.