2013 was a good year to be a venture capitalist.

In the fourth quarter of 2013, 24 venture-backed companies made their initial public offerings, collectively raising $5.3 billion. It was the third consecutive quarter with more than 20 VC-backed IPOs, making 2013 the best year for new listings since 2007, the year before the Great Recession, according to data collected by Thomson Reuters and the National Venture Capital Association (NVCA).

Twitter had the most widely discussed IPO of the year, generating a record $1.8 billion for the company (and another $300 million in the following days, when Twitter’s underwriting banks exercised their option to sell an additional 10.5 million shares). But the biotech sector was the year’s quiet winner, accounting for more than half the IPOs in 2013.

The strength of the overall IPO market in 2013 — especially in biotech — is thanks to the JOBS Act’s onramp provision, said NVCA’s research chief in a statement. The JOBS Act eases the process of going public for “emerging growth companies,” or businesses with less than $1 billion in annual revenues, enabling them to submit registration statements to the SEC on a confidential basis.

Because of the SEC doesn’t publish statistics on the number of confidential IPO registrations it receives, the IPO pipeline has become cloudier, but that doesn’t appear to have hindered the success of IPOs. Of the 24 companies that went public in the fourth quarter, 22 are trading at or above their offering price.

Merger-and-acquisition deals didn’t fare as well in 2013, however. With 377 acquisitions of venture-backed companies this year, 2013 was the slowest year for M&A deals since 2009.

For more details on the IPOs and M&A deals of 2013, check out the chart below. 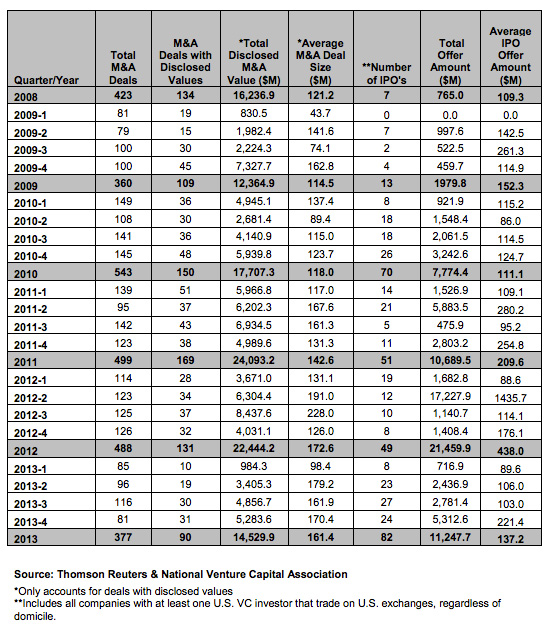