Venture capital funds in the U.S. raised $4.1 billion across 34 funds in the first quarter of 2010 — a 41 percent jump from the same period in 2009. The figures, collected by Dow Jones LP Source, suggest a promising year going forward for established funds and their portfolio companies. 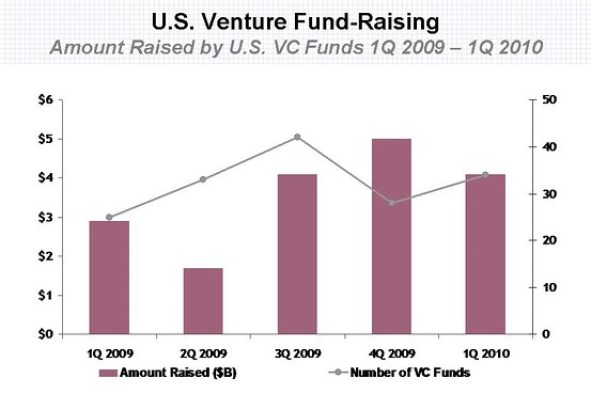 Within the venture capital community, 17 multi-stage funds drew the most financing — about 76 percent, or $3.1 billion of it, and almost double what they took in in Q1 2009. Sixteen early-stage funds raised $605 million total, down 36 percent from last year.

These numbers highlight an interesting transition. When capital was tight last year, during the immediate recovery from the economic downturn, early-stage funds fared much better. Limited and institutional partners didn’t want to be investing in huge funds, and many firms — even some of the oldest — preferred smaller deals in the single-digit millions over large follow-on rounds. The fact that multi-stage firms lapped early-stage firms this time around points to a strong uptick in liquidity.

Limited partners are hedging their bets by choosing multi-stage funds,” according to research group Dow Jones Private Equity Analyst. “They are reluctant to dive too heavily into early-stage funds which can take longer to produce returns or later-stage funds which will remain unattractive until the liquidity markets hit their stride again.”

Breaking down the private equity data, the majority of funds went to buyout and corporate finance funds, which raised $9.7 billion across 39 funds. Seven distressed funds raised $3.5 billion, and seven mezzanine funds took in $1.5 billion. All of these categories saw increases over the first quarter of last year. Secondary funds, the only category to have a good year in 2009, seem to have peaked, according to Dow Jones, raising $1.2 billion, down from $3.8 billion raised in Q1 of 2009.