The first three months of 2008 saw more venture investment into open source startups than any quarter ever, according to tech analyst company The 451 Group. Venture firms invested a total of $203.8 million into open source, up from $193.7 million in the fourth quarter of 2006, which was the previous record-holder.

We’ve noted repeatedly that heat seems to be rising in the open source market, and its increasing acceptance and popularity was a major theme at last week’s InfoWorld Open Source Business Conference. Rob Bearden, an entrepreneur in residence with Benchmark Capital, even said that for the most part, Benchmark will only invest in companies that are open source or offer software as a service. The fact that open source companies like XenSource and mySQL are being acquired for hefty sums has to be pretty exciting for investors, too.

The 451 Group isn’t taking a completely optimistic view, however, because only $9 million went to first rounds or seed rounds for new companies. Most of the funding is for companies like Automattic, Greenplum and SugarCRM, which all raised between $20 million and $30 million in second and third rounds of financing. (Read our coverage here, here and here, respectively.)

Still, there are some exciting startups entering the field– Ringside Networks, for example, was getting a lot of attention at the OSBC for taking elements of Facebook and distributing them elsewhere on the web. The startup has raised an undisclosed seed round and is looking to raise more.

These numbers are good news amid all the signs of a slowing economy, and also compared to recent statistics released by Dow Jones VentureSource, which showed that growth in Web 2.0 investments (which include a number of open source companies) slowed in 2007. 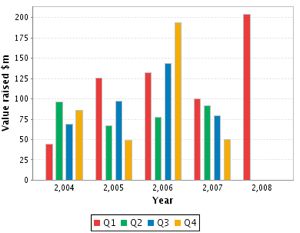 Q1 of 2008 saw more than twice as much investment as the same period in 2007, when open source fundings only totaled $100.4 million. (See chart to the left.) The 451 Group says it tracked a total of 20 fundings in the last three months.