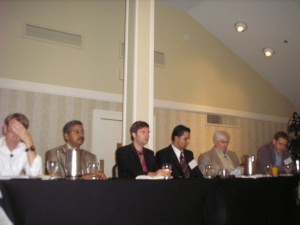 The view of Silicon Valley’s top venture capitalists on the downturn: act responsibly, but don’t panic.

That’s one of the messages at the first panel this morning at VentureBeat’s conference on “How to manage your start-up in the downturn.” The conference, at the Stanford Park Hotel in Menlo Park, has a full house of a couple of hundred movers and shakers.

Matt Marshall, editor and chief executive of VentureBeat, started the panel with a question about what the panelists thought about the “Good Times R.I.P.” presentation by Sequoia Capital, which recommended that start-ups slash spending. John Doerr said that it was good advice because the downturn was so serious. 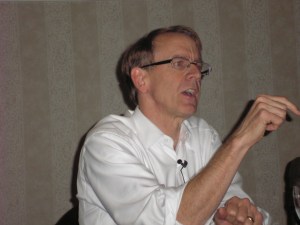 Doerr, a partner at Kleiner Perkins Caufield & Byers, said that 40 percent of the world’s market value (which he said was $165 trillion) has evaporated. He said the $15 trillion mortgage market in the U.S. had suffered $1 trillion in losses. The stock market was worth $20 trillion, and the debt market was $50 trillion. To see those values plunge so much means there is a crisis of confidence, Doerr said.

Ram Shriram, an early investor in Google, said that this business cycle is affecting both businesses, which are slashing information technology funding, and consumers, who have been hit by the credit crunch. Shriram recalled how, in the midst of one downturn, it took him 18 months to raise $3 million in capital. He didn’t think it would get that bad, but noted “this is no ordinary downturn.” 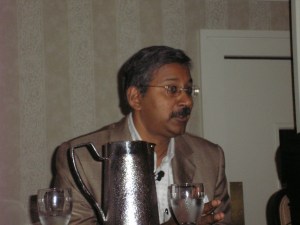 In spite of all that, Matt Cohler, a former executive at Facebook and now a partner at Benchmark Capital, said that start-ups shouldn’t panic now. Kittu Kolluri, a partner at New Enterprise Associates, said that he thought that innovation would happen on a steady basis, regardless of whether the markets are in an upturn or downturn. Hence, he believes that venture capitalists will keep investing, in contrast to the downturn of 2001 when no one was giving out more money.

Ron Conway, one of Silicon Valley’s most prolific seed stage investors, noted that four of his companies were in the process of asking for and getting bridge loans now from venture capitalists; to him, that means that the VCs haven’t yet shut down.

Conway said that the best place to get cash now is from existing investors. He recommended companies that have less than a year of cash go to their investors and ask for a bridge loan. A convertible bridge loan that can be turned into equity is much easier to close than a formal round. That way, they can find out immediately if their existing investors will be able to support them or not. Then the start-ups can plan accordingly.

Conway had a lot of perspective from the last downturn, where he was highly exposed to the 2000-2001 crash. Last time, he had 224 companies in his portfolio. Of those, 70 percent, or 164 companies, went out of business. His team had to go into triage: those companies with less than a year of cash had to be shut down. The rest could receive more money than previously anticipated. Now, Conway says he has invested in 130 companies since 2005. Only 13 percent of those companies have less than a year of cash. He has gone to those companies to confront them with the problem. Those with six months to nine months in cash can survive, but they need to show their investors that they are acting to cut costs and get more money.

He noted that this downturn is different because the epicenter isn’t in Silicon Valley. It will certainly be hit by the ripples of the downturn from other quarters, but he noted he would continue to invest. The winners from his portfolio last time were Google, PayPal, and Ask Jeeves. One of his funds, Angel 1, had a five times or six times return, while the second one of 2000 time frame broke even.

Shriram said that overseas markets won’t be a panacea for investment money. Countries such as India are still hampered by infrastructure problems and thus don’t have as many tech start-up investment opportunities. Nothing, he noted, is decoupled from the global market in crisis.

Kolluri at NEA said that India is indeed not ripe for hundreds of millions of dollars in startup investments. But there are more opportunities for late stage investments than there were. He said that companies that target both the Indian and Chinese markets could get off the ground. “They’re markets that are ripe at this point and could become very big, particularly mobile,” Kolluri said.