(Updated with Comscore and Hitwise stats, which show Veoh’s numbers lower than the company states; also updated with a fuller list of investors)

PE Hub has the news.

The video sharing site came out of testing mode in February, and is different from most sites because it uses peer-to-peer technology (a technology that taps the computers of regular users) to distribute DVD-quality video, or better than the standard YouTube video.

However, it is not alone in using such technology. Joost, an IPTV company using P2P, recently raised $45 million in venture backing. And there’s a new player, Babelgum, launched by Fastweb founder Silvio Scaglia with $13.2 million of his own money.

With Veoh, people can upload videos and then can syndicate them to other popular sites including MySpace and YouTube. Joost is also trying to encourage such community activity, offering sharing, chat, IM and even blogging from within a show. Veoh lets producers make money through a revenue share or by charging a fee. Babelgum lags on the social front, and also is behind in pulling in content, and has evident advantage anywhere else, so it is a long-shot at this point.

Veoh says its “user base” is now 12.5 million, up from 4.4 million in February — we’re assuming that’s monthly uniques, but are trying to confirm. (Update: Comscore shows them much lower; see below.)

Veoh and Joost have now each raised far more cash than their predecessors did — more than YouTube, MetaCafe and DailyMotion put together, for example. 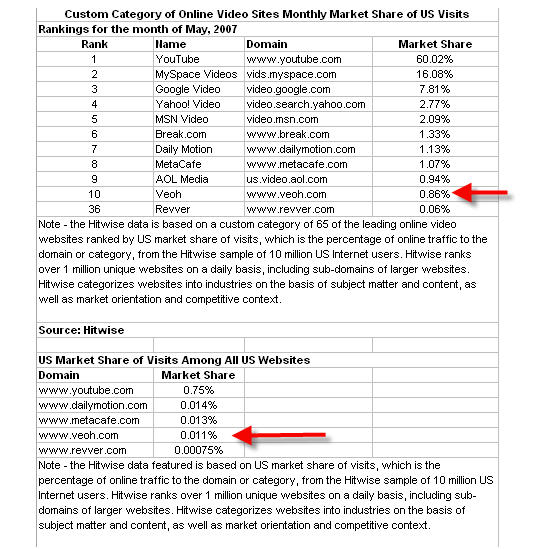