The launch comes at a time when public trust in big technology companies has hit rock bottom following countless reports of breaches, lapses, and data harvesting escapades. Consequently, “privacy” is pretty much the buzzword of choice emanating from most of the big tech companies, and with its new search engine, it’s clear that Verizon is adopting a similar tack. With OneSearch, Verizon promises there will be no cookie tracking, no ad personalization, no profiling, no data-storing, and no data-sharing with advertisers.

With its default dark mode, OneSearch lets you know that Advanced Privacy Mode is activated.

You can manually toggle this mode to the “off” position which returns a brighter interface, but with this setting deactivated you won’t have access to privacy features such as search-term encryption. With Advanced Privacy Mode on, links to search results will only be shareable for an hour, after which time they will “self-destruct” and return an error to anyone who clicks on it. 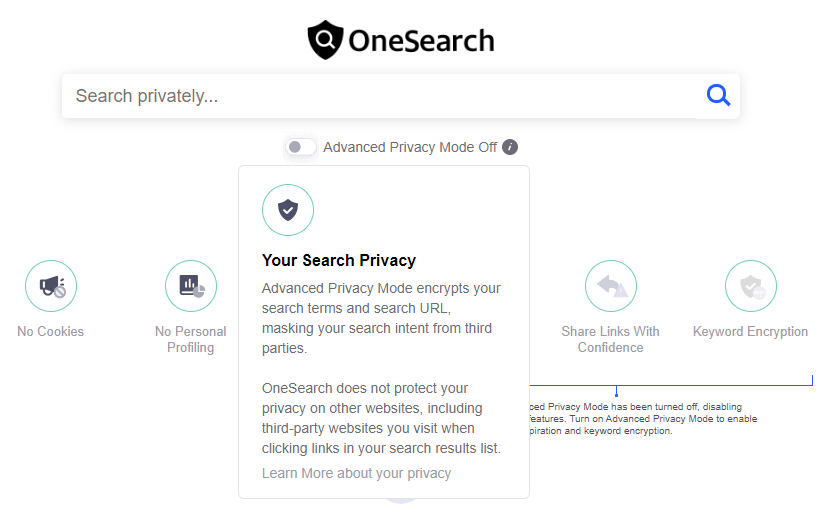 More broadly, the OneSearch interface is clean and fairly familiar to anyone who has used a search engine before. But at its core, it promises to show the same search results to everyone given that it’s not tailored to the individual. “OneSearch doesn’t use your search habits or profile data to filter or optimize search results,” it said. “OneSearch gives you a wider, deeper range of results without bias.” 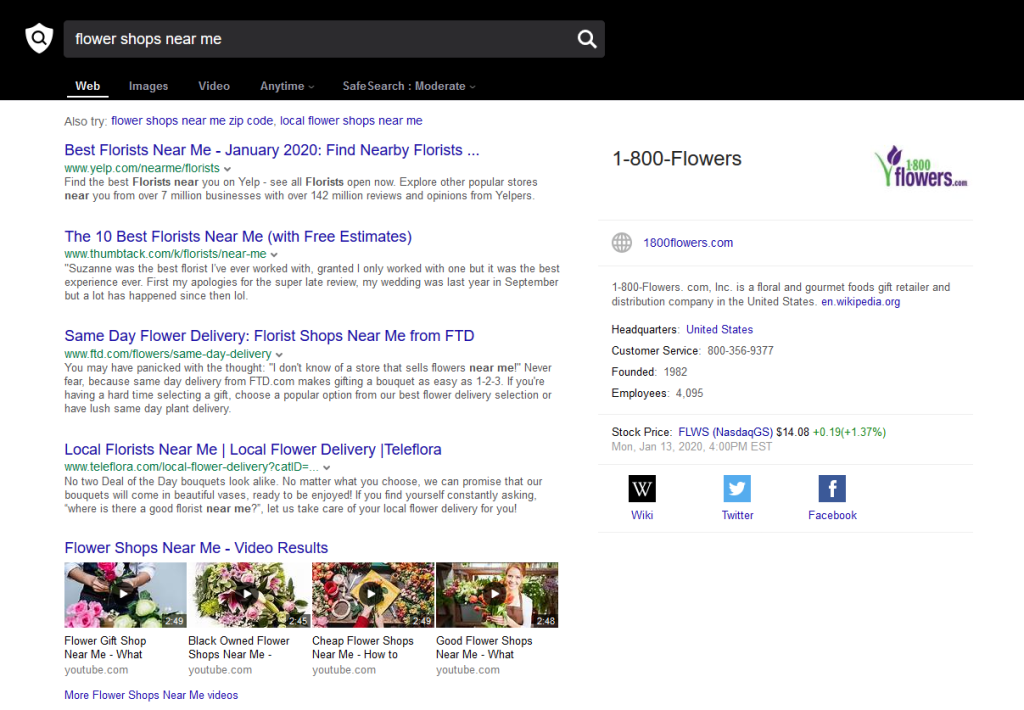 Above: OneSearch: Flower shops near me

How private is ‘private’?

Verizon is no stranger to controversy for its use of overly pervasive tracking technology. Back in 2016, Verizon paid a $1.4 million fine to the FCC for so-called “supercookies” that track which websites users on its mobile network visited. Verizon, clearly, would love to have the kind of ad network that Google operates, but with OneSearch Verizon is pretty much pitching itself as the antithesis of Google, without name-checking its adversary specifically.

“We deeply believe in consumer trust and choice, both for our user community and our partners,” noted Verizon Media’s head of consumer product Michael Albers in a press release. “In support of our commitment to trust and transparency, we are excited to launch OneSearch, an innovative new online search experience built for privacy-minded searchers.”

In the OneSearch privacy policy, Verizon lays out how it will and won’t use personal data. For example, as part of its “search optimization process,” Verizon said that it will store a user’s IP address, search query, and user agent (data about the user’s hardware and software configuration) on different servers so that it can’t draw correlations between a user’s specific location and the query that they’ve made.

Verizon said that it will monetize its new search engine through advertising; however, the advertising won’t be based on browsing history or data that personally identifies the individual — it will only serve contextual advertisements based on each individual search. This means that a search for “pizza delivery” may show paid search results for online pizza delivery outlets. For such queries to be relevant, however, there does need to be a degree of localization involved, which could partly explain why Verizon said that it may provide the user’s “general location” to its advertising partners — reading between the lines here, this likely means at a city or neighborhood level, given that Verizon maintains that it won’t pass the user’s IP address to its advertising partners.

There are no shortage of privacy-focused search engines out there, with the likes of DuckDuckGo already proving popular with millions of people around the world. But Verizon Media has a big reach through its various affiliates and deep pockets, so we can perhaps expect to see OneSearch crop up inside various online entities in the future. Indeed, Verizon did in fact hint at another potential monetization mechanism for OneSearch involving licensing — it said that it’s looking for businesses with an interest in privacy to integrate OneSearch into their own products.

As a side point here, it’s worth noting that the OneSearch name was previously used by Yahoo (which is now part of Verizon Media) as part of a mobile search product more than a decade ago. And that, it seems, was likely the genesis of Verizon Media’s OneSearch — after all, it already owned the domain name, so why not use it?

OneSearch is available from today on desktop and mobile web, with plans afoot to launch native mobile apps later in January. For now, OneSearch is tailored to the North American market, but Verizon said that it will localize it for other countries “soon. “