Like it or not, there’s no single way to characterize all mobile phone users — usage models vary between individuals and even their circumstances on a given day. The person who typically needs cell service only during a daily commute or walk might become dependent on it during a trip or temporary change of life, such as a pandemic. If any broad generalization can be made across users, it’s that many people want consistently fast cellular service throughout the day and night, wherever they may need it.

5G has been marketed as a universal solution to cellular speed concerns, using new technologies to raise both the floor and ceiling for internet performance in public places, homes, offices, and factories. But 21 months after top U.S. carrier Verizon launched the “world’s first” 5G network in four cities, and 16 months after it started offering 5G for mobile phones, its network performance is anything but consistently fast. RootMetrics noted in March that Verizon’s highest 5G availability rate in a given city (Chicago) was around 3%, and that its millimeter wave towers whipsawed between good and great performance in the few places where they’re available. Last month, the BBB’s National Advertising Division took Verizon to task for overhyping its 5G footprint, and subsequently censured AT&T for misleading customers about “5G” performance.

I wanted to experience Verizon’s 5G for myself, but it’s not available in Orange County, California, where I live. So after taking delivery of a brand new Motorola Edge+ phone, I drove up to Los Angeles, one of Verizon’s initial 5G cities — and thus one that’s had plenty of time to improve. Instead, I found the 5G experience almost laughably uneven, like a roller coaster that moves at kiddie speeds 97% of the time, then unexpectedly launches off into space. This wasn’t surprising given RootMetrics’ findings, but since we’re now only a few months away from Apple’s release of the first 5G iPhones, I’m concerned that millions of customers are going to be confused or disappointed with their first 5G experiences, thanks in large part to decisions made by U.S. carriers. Here’s why.

5G was supposed to be simple

The promise of 5G was straightforward: Carriers were supposed to deploy new cell towers and phones with faster data speeds and much higher network responsiveness. That’s pretty much what happened in South Korea, China, and several European countries — 5G users in major cities are now streaming videos and downloading apps at 500Mbps to 1Gbps speeds, over 10 times as fast as typical 4G, and businesses are consequently rolling out next-generation content and apps to make use of the massive bandwidth, including high-performance mixed reality headsets.

5G’s rollout in the United States has been … different. Leading carrier Verizon relied on short-distance, high-speed 5G millimeter wave towers in “parts of” some U.S. cities, and its similarly large competitor AT&T did the same. Smaller rival T-Mobile instead focused on installing long-distance, low-speed 5G towers across the country. And before it was absorbed by T-Mobile, Sprint debuted mid-range, mid-speed 5G towers in a handful of markets.

This variety of approaches has left the U.S. with three 5G networks that are mediocre for different reasons. Unlike Asia and Europe, where paying for 5G service means getting faster data wherever 5G is available, there’s currently a non-trivial chance that a phone’s “5G” indicator will light up to indicate little more than 4G-quality service. In Verizon’s case, a stupidly long “5GUWB” badge guarantees faster service, but you’ll have little chance of actually seeing it without relying on a street-specific map.

Kyle’s problem was that acquiring a Verizon 5G signal was challenging, even when he was told explicitly where to go to find it. “My Note10 5G loaner repeatedly failed to lock onto a 5G signal even with a clear view of the nearest node,” he said, meaning that he — and other 5G users — would expect to spend most of their cellular time on 4G, not 5G. RootMetrics, which tracks carriers’ speeds across multiple cities, said that Verizon most often delivered 20-40Mbps 4G speeds during that point in time, and now has more markets in the 30-50Mbps 4G range, performance it characterized (apparently without irony) as “consistent and excellent.”

From where I stand, the user experience of flipping between 30Mbps and 1.83Gbps depending on your location is neither consistent nor excellent. In the right spot in Los Angeles, I used Verizon’s 5G and Netflix to fully download the two-hour movie Spider-Man: Into the Spider-Verse in only 26 seconds. On Verizon’s 4G network, that download takes nearly 16 minutes. Like Kyle, I only saw Verizon’s fast 5G speeds in the narrowest of real-world locations, while falling back to much slower 4G everywhere else.

I looked at Verizon’s 5G coverage maps to find testing spots in Los Angeles that would hopefully be easy and quick, and in their current form, the maps default to very simple boxes that are either white (4G), lightly shaded (maybe 5G), or landmarks (definitely 5G). Even though the boxes make clear that Verizon’s 5G isn’t available in most of L.A., you might still think there’s more coverage than there actually is. 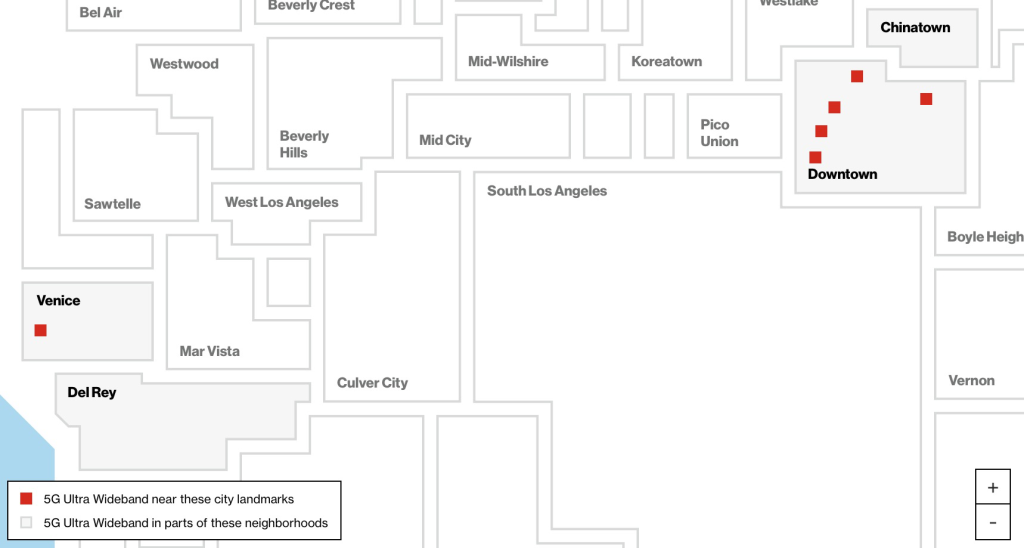 If you tap on one of the covered areas, you can zoom in to a different view that reveals how street-specific Verizon’s 5G coverage is. Here, pink means 4G and red means 5G; like Kyle, I could identify supposed 5G intersections and neighborhoods scattered around the city and directly visit them. So I picked a downtown area with a particularly high concentration of red, as well as Venice Beach, to see what that was like. In addition to the Motorola Edge+, I brought a Sprint OnePlus 7 Pro 5G and my 4G T-Mobile iPhone 11 Pro for comparative testing. 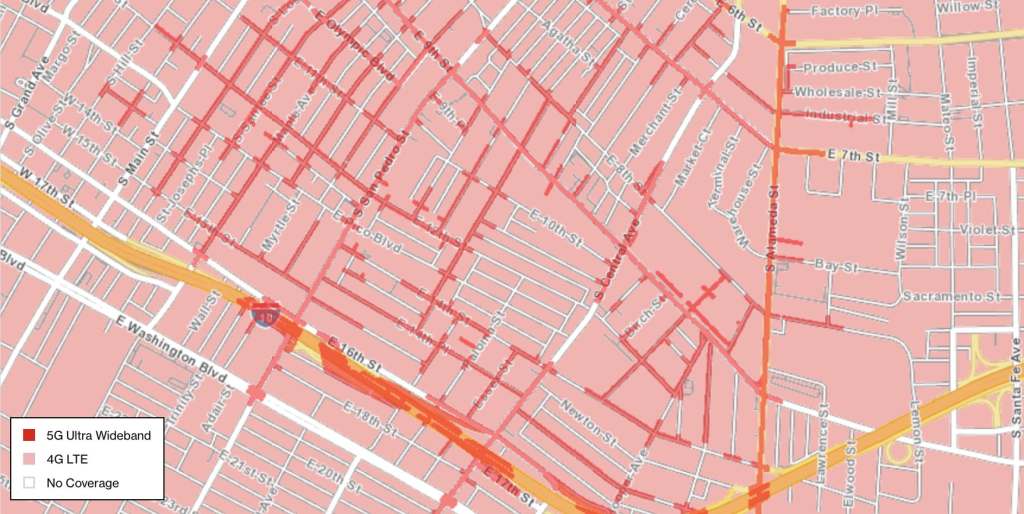 To say that Verizon’s 5G was location-dependent would be a profound understatement. One of the guaranteed locations on Verizon’s L.A. maps was the famous Venice Beach boardwalk, and though the 5G signal was indeed available right there, my phone fell back to 4G only a short block away. I was able to hit a rocket-like download peak of 1.987Gbps on 5G, and nearly repeated that feat multiple times with scores upwards of 1.7-1.9Gbps. If I spent my entire day sitting at exactly that spot, and didn’t care about bandwidth or storage limitations, I probably could have downloaded everything worth seeing on Netflix. 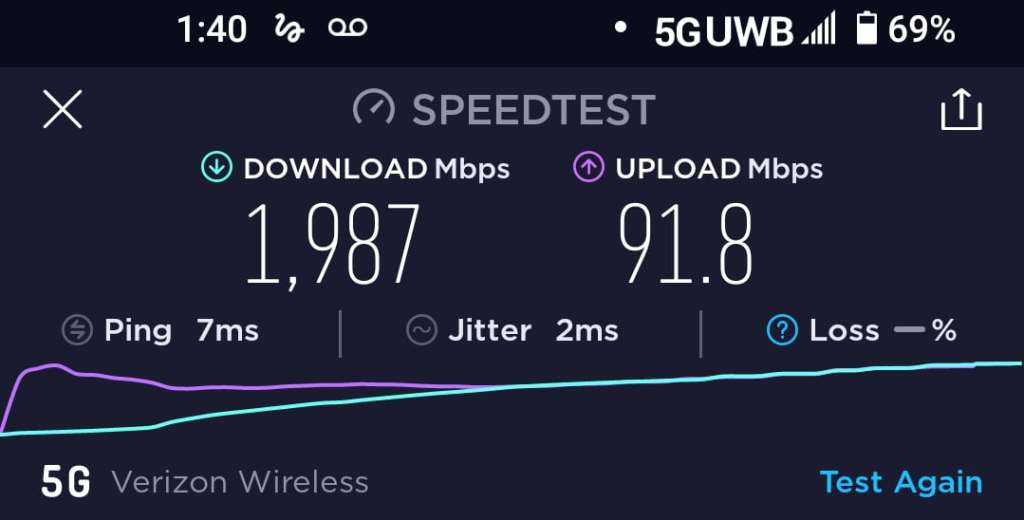 Outside the small 5G zone, however, Verizon’s speed dipped to 47Mbps. T-Mobile’s 4G speed, meanwhile, was only 26Mbps at the boardwalk, though it was higher than 77Mbps elsewhere. Sprint clocked over 86Mbps by the boardwalk, but nearly 230Mbps only a short distance away. Coincidentally or not, Verizon’s tiny best-case 5G zone in Venice Beach was also a worst-case example for its rivals.

I also tried to use Verizon 5G in downtown Los Angeles, deliberately selecting areas that were supposed to have 5G service. For instance, the Edge+ struggled to pick up a 5G signal all around Union Station, but the “5GUWB” badge popped on and off at various intersections around Arcadia and North Los Angeles Street. It would appear for half a block, with Ookla’s Speedtest registering download rates ranging from 8.45Mbps to 1.767Gbps — more in the center — then abruptly disappear, giving way to 47-100Mbps 4G speeds. That was roughly the same as Sprint’s (44-94Mbps) and T-Mobile’s (77Mbps) 4G Speedtest results in the same area. On the rare occasions I acquired a Sprint 5G signal there, it was in the 200Mbps range, well below the 480Mbps peak I saw in August 2019, but within “typical” levels promised by the company.

Although the earliest adopters will have had access to 5G technology for nearly two years by the time Apple releases its first 5G devices, new iPhones are expected to spark U.S. 5G adoption at levels that haven’t been seen by Android rivals, following the same pattern seen with Apple’s first 4G models years ago. That’s the reason carriers have targeted the second half of this year for the next stage of their 5G rollouts. Between July and December, Verizon is expected to offer a second, slower tier of 5G service in roughly half of the United States, comparable to the long-distance, low-band 5G AT&T and T-Mobile will offer nationally during the same time period. Some 4G towers will use digital spectrum sharing (DSS) to simultaneously deliver 4G and 5G service, though this flavor of 5G will likely approximate 4G in speed.

We know generally what that’s like from tests of T-Mobile’s 5G network, which promises a typical 20% improvement over 4G — think 60Mbps rather than 50Mbps — but can exceed 200Mbps under ideal circumstances. In some markets, T-Mobile’s 5G only meets or underperforms its 4G speeds, while in others, 5G is two times faster. Verizon’s and AT&T’s most commonly available 5G will likely have similar performance characteristics, which is to say that many first-wave U.S. iPhone 5G customers will wonder why anyone has made a big deal about 5G. 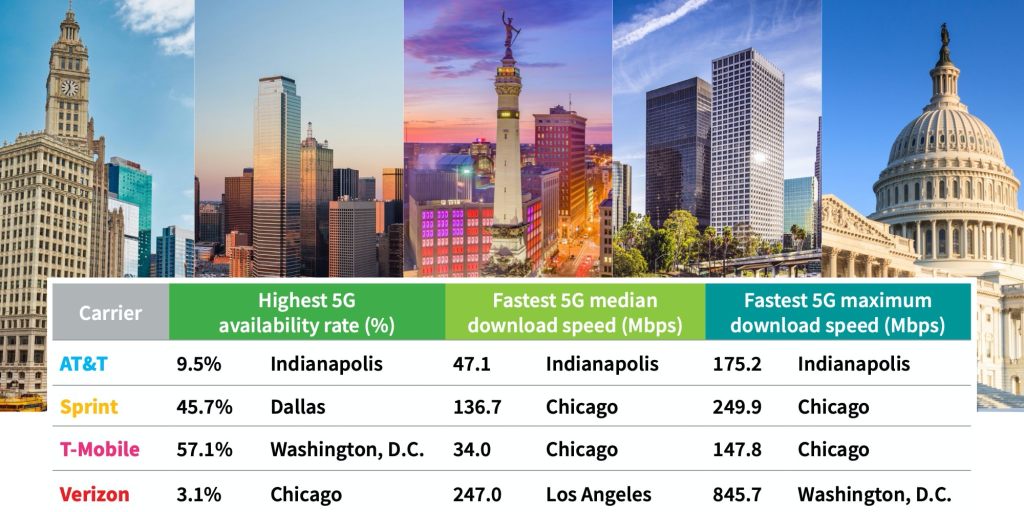 Above: Rootmetrics’ report on 5G availability and performance illustrates the mixed bag of U.S. speeds and coverage.

In other countries, however, 5G iPhones will blow their predecessors out of the water in cellular speeds. Chinese, Japanese, and South Korean users are seeing 500Mbps to 700Mbps typical performance in major cities, with peaks comfortably above 1Gbps. They’re still subject to 4G fallbacks in uncovered areas, but typically enjoy faster 4G speeds than U.S. carriers have offered. European 5G adoption has been very uneven, but U.S. 5G already lags behind countries including the U.K., Spain, and Switzerland, the latter seeing a 3.67Gbps peak download speed in live network testing last year. That’s close to Ericsson’s 4.3Gbps milestone and Nokia’s subsequent 4.7Gbps peak, each reached in lab test environments this year.

While individual carriers bear responsibility for these major service quality fluctuations, I wouldn’t be surprised at all to see Apple tempering 5G performance expectations when announcing the devices — framed, of course, in a positive way. There might be a brief discussion of the new iPhones’ ability to harness whatever a network is capable of, balanced by a passing reference to the still-nascent nature of some countries’ 5G deployments. And there could be a reference to how Apple A14-powered iPhones are better positioned than Android rivals to benefit from high download speeds, with less emphasis on weaker upload speeds or the new iPhones’ comparatively lower camera resolutions.

As a daily iPhone user, I’ve been waiting for both the right 5G phone and a performant 5G network to take the plunge, as I’m looking forward to enjoying super-fast downloads (and at least somewhat faster uploads) no matter where I may be working or traveling. Despite my experiences with Verizon’s network in Los Angeles, I’m hopeful that at least one carrier has compelling 5G service available where I live by year’s end. It’s great that I can download a full movie over 5G in under half a minute if I’m on the boardwalk at Venice Beach. But I don’t think I’m the only person who would much rather be doing something better than watching videos there, and if 5G’s going to shine this year, it’s going to need to be consistently fast at locations other than a handful of landmarks — soon.