One year ago, Verizon seemed poised to define 5G cellular technology for the entire world. By January 2018’s CES, the company was already working on becoming the first major carrier to deploy a commercial 5G network, which it followed up by identifying its first 5G home broadband cities, later revealing its first mobile 5G device — Motorola’s 5G Moto Mod. As of early August 2018, AT&T, T-Mobile, and Sprint all seemed at least somewhat behind.

It didn’t actually shake out that way. Verizon launched a tiny pre-standards 5G home broadband network that couldn’t scale, followed many months later by a standards-compliant mobile 5G network with barely any coverage. AT&T launched an invisible 5G network that it later described as exclusively for businesses. And despite struggling through a slow-moving merger with T-Mobile, Sprint improbably succeeded in launching a small consumer 5G network that was nonetheless more tangible and usable than both AT&T’s and Verizon’s.

Retrospectively, the one bright spot in Verizon’s early 5G planning was something amorphous: focus. The carrier paired sharp, clean home 5G marketing with its simplest, most appealing pricing structure yet — unlimited service costs $50 for existing customers or $70 for new customers, including hardware.

The home 5G plan was brilliant because it’s so straightforward: reasonable enough to tempt new customers and lower for existing customers to incentivize them to add more service. But since then Verizon has mucked up the waters with mobile 5G plans that have only gotten more complicated and confusing over time. 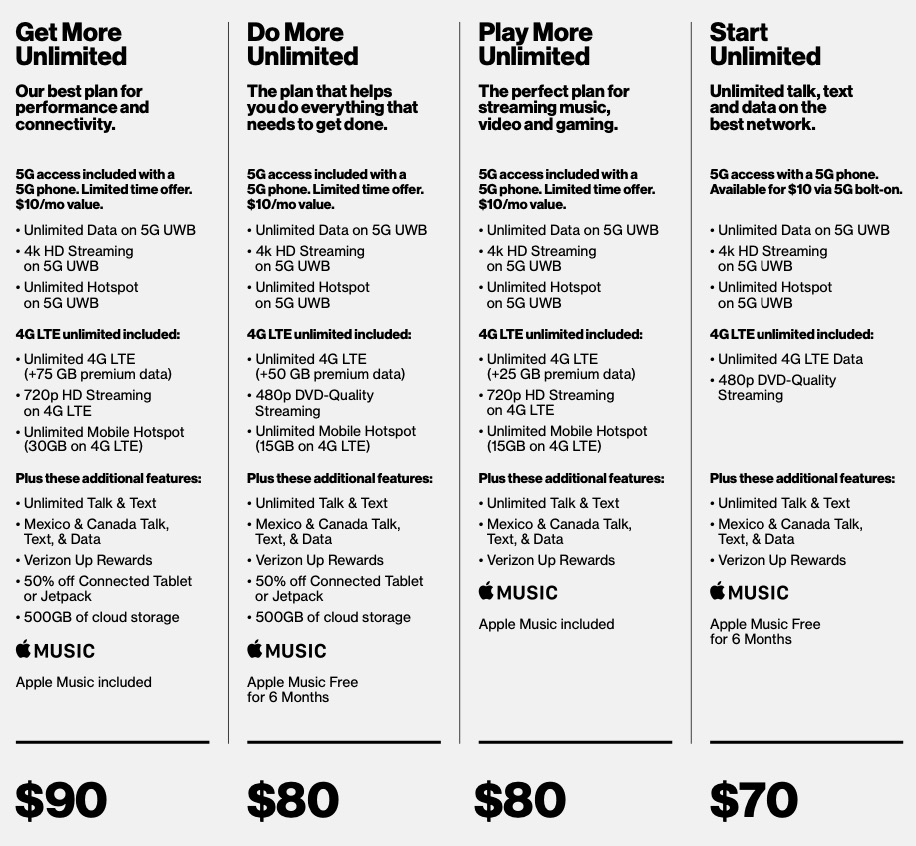 Only a company that would qualify the unqualified word “unlimited” — using synonyms such as “beyond” and “above” for different tiers, no less — would think that these four new names were a better idea. And the concepts justifying the tiers aren’t too smart, either.

Start Unlimited is for the person who is willing to pay $70 per month for 4G service while accepting that the “unlimited” data can be throttled during any “times of congestion” the network experiences. This plan doesn’t include 5G service for “free;” it’s a bolt-on, and you have to pay $10 more per month for it.

In other words, a 5G customer might as well just sign up for Play More Unlimited, which costs $80 per month for service, only throttling the “unlimited” 4G after 25GB of monthly usage. This plan also ups video quality from Start Unlimited’s 480p to 720p, adds 15GB of mobile hotspot service, and includes free Apple Music service for the life of the plan. For a limited time, this plan includes free unlimited 5G access, as well.

Do More Unlimited costs the same $80 as Play More Unlimited, but you give up the increased video quality for a 50GB threshold before 4G throttling, get 500GB of cloud storage, and have only six months of free Apple Music service. It apparently exists for consumers who want to “do,” not “play.”

Finally, Get More Unlimited costs $90 per month and combines 720p video streaming, 500GB of cloud storage, and long-term free Apple Music with 30GB of hotspot data and 75GB of throttle-free 4G data. Again, “unlimited” 5G data is included with this plan at no additional charge for a limited time, if you can find a block with actual Verizon 5G service.

If all of those plans strike you as not only confusing but expensive, that’s because they are. And who knows when the “limited time” free 5G access will end, driving the prices up by $10 per month per plan. 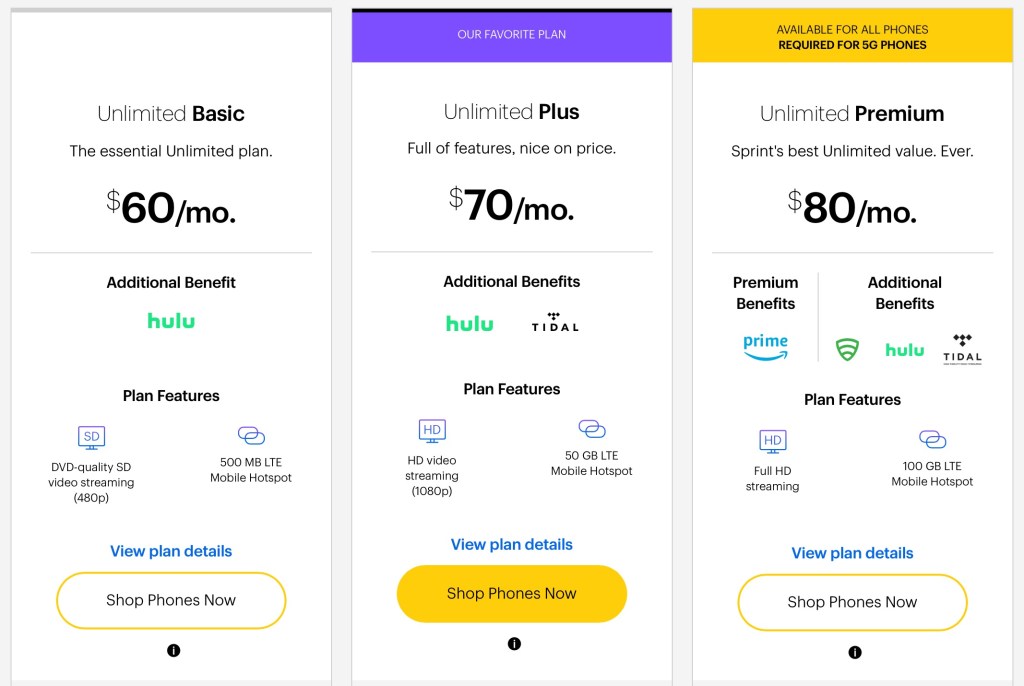 By comparison, Sprint offers three unlimited plans — Basic, Plus, and Premium — that are all simply named, cheaper than Verizon’s, and loaded with extra benefits. The catch is that you only get unlimited 5G service from Sprint if you sign up for its super-deluxe $80 Premium plan, the same amount you’d spend for an entry-level Verizon 5G plan with fewer perks. But let’s pretend Sprint doesn’t matter, because its 4G network isn’t that great and the company may soon cease to exist as we know it today.

T-Mobile’s latest unlimited plans beat Verizon’s, too. They start at $60 per month (Essentials) rather than $70, add perks such as free Netflix rather than Apple Music at $70 per month (Magneta) instead of $80, and offer roughly all of Verizon’s combined Play More and Do More features at their top $85 tier (Magenta Plus). Like Sprint’s unlimited plans, T-Mobile’s are easy to remember, with respectably specs, and are generally more affordable than Verizon’s — with a government penalty-backed promise that they won’t get more expensive for three years after T-Mobile merges with Sprint, even while adding 5G service.

Verizon could easily make its mobile 5G offerings as simple as its home 5G service, which includes not only the necessary home hardware but also the customer’s choice of a free Apple TV 4K or Google Chromecast Ultra. Instead, at a time when customers are increasingly willing to impulsively buy easy-to-understand services (see: in-app purchases), Verizon is somehow making the decisions harder.

It takes guts to axe a potentially disparate collection of tiered, confusing price offerings, leaving customers fewer choices in the process. But as Apple demonstrated when it pared down its famously crazy early 1990’s computer lineup into a grid with four choices (pro- and non-pro desktops and laptops), there are ample rewards for those who dare to simplify.

With only nine launched 5G cities, Verizon is just at the start of its next-generation network rollout, so it still has the chance to turn things around and become the leader it clearly wants to be. If nothing changes, however, I won’t be at all surprised if the aggressive New T-Mobile leverages simpler and more affordable data plans to take big chunks out of Verizon’s customer base, pushing it into the once unthinkable number three slot behind its competitors — that’s the most logical next step for the Uncarrier.

Despite some of its more questionable recent choices, Verizon has the network assets, budget, and customer base to be a winner in the 5G era. Willingness to embrace pro-consumer simplification will likely determine whether it moves up or down the cellular industry’s ladder in the next few years.