The curious case of the smart cup continues.

We’ve mocked and questioned it at length, yet Vessyl, the yet-to-be-shipped cup equipped with a bunch of sensors, continues to keep going. It’s not only reached $1 million in pre-orders a little more than a month after it started taking names, but it’s also snagged a former top Nike design executive, Jason Mayden. 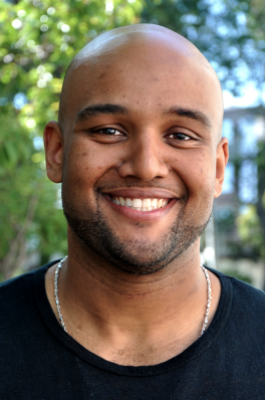 Mayden has joined Mark One, the company behind Vessyl, as its vice president of design, taking the lead on interaction design, user experience, packaging, and overall brand cohesion. Industrial design, however, won’t directly fall under his responsibilities, he told me in an interview.

And Mark One is lucky to have him. Mayden joined Nike first as an intern for the Nike Jordan brand, eventually climbing his way up to senior global design director for the Jordan brand and also helping lead Nike’s Fuelband and wearables efforts as a director. He has an MBA from Stanford and is now a fellow at its design school.

Mark One is truly doing some stellar recruiting here.

‘I was just so thoroughly impressed, not just with the team, but also the mission’

When the Vessyl came out to the public, some of us gave it the benefit of the doubt, but many found it silly and uppity. Comedian Stephen Colbert even devoted an entire, pretty hilarious segment to it.

Mayden himself turned down a new career in private equity to join the company because he was “just so thoroughly impressed, not just with the team, but also the mission,” he told me. Mark One vice president of marketing Nic Barnes reached out to him, and before he knew it, he was under the spell of the brilliant and beautiful Vessyl and its leader, Justin Lee. (I’ve met Lee, and he’s the designer type, speaking in manicured visions, so I don’t blame Mayden.)

His reiteration of the team’s incredible focus on the mission did not escape me during our call.

To be fair, Mayden also had a personal interest in what the Mark One team is working on: His young son recently had some health issues due to how his body breaks down food. Mayden’s draw is actually to the fundamental tech and science research underneath the fancy cup.

And yet, it’s still not adding up.

As I pointed out in my coverage of the Vessyl’s launch, this can’t be all. The Vessyl is a pricey piece of consumer hardware mostly appealing to the trendy techies who want the latest gadget, athletes, and whoever buys the vision, but it has pretty difficult technology in it, and its team is made up of professionals hailing from top companies who could probably work for anyone they choose.

From a former iPod engineer to a Levi’s marketing guru, and now a former Nike Jordan and Fuelband lead, top talent keeps getting hooked, and I don’t think it’s because of Lee’s spells or the company’s fancy demo video.

Mark One must be cooking up some fancy tech and products we’ve not heard of yet, but its recruits surely have — or at least, that’s my best guess.

And it’s not only the talent. The company has already raised an undisclosed amount of seed funding from unnamed investors (of course), and word on the town is that it’s talking to new investors.

Oh, and in case you’re now convinced to pre-order your own smart cup, Mark One is making a limited edition Vessyl, dubbed the “Mille” cup, available to its early backers until today’s 1,000 units run out. I’m told the first thousand sold out in 45 minutes yesterday, for what it’s worth.