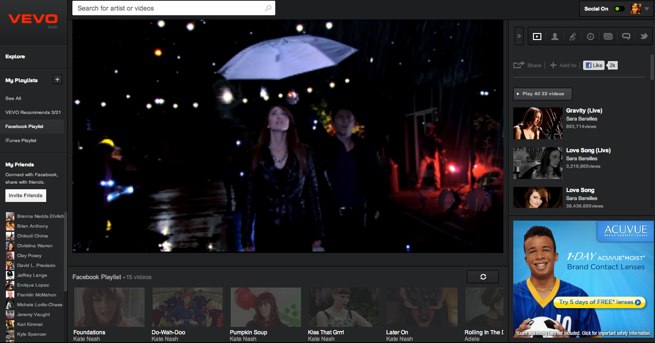 Less than two weeks after a relaunch featuring deeper ties to Facebook, music video service Vevo is seeing a record number of video views per person and is now netting 3.5 billion total views a month.

The video service, which is now attracting 45 billion views a year, also plans to expand beyond the U.S., Canada, and the U.K. to six additional countries in 2012 and is seeing the fastest growth on mobile and tablet devices, Caraeff said.

The new Vevo experience, seen on web, mobile, and television (by way of a new Xbox application), is rich with Facebook-infused personalization features. When you log in via Facebook, for instance, the service scans your Facebook activity to create playlists from shared or “liked” artists and tracks.

It’s a rather brilliant integration that takes advantage of Facebook users’ previous listening actions and provides the easiest way yet to sit back and stream. Of course, since the entire experience exists on top of Facebook’s Open Graph, video viewing behaviors are pushed back to Facebook, creating a powerful, viral loop that Vevo is clearly noticing.

Vevo is just one of many companies feeling the Facebook effect. Pinterest, Viddy, Foodspotting, and several others are all noticing remarkable upticks in activity and new users since releasing applications on Facebook’s new Open Graph platform.

Vevo, according to paidContent, made $150 million in revenue in 2011 and has paid out $100 million in royalties in the last two years. Thirty percent of video consumption in the U.S. is now happening off of YouTube, Caraeff said.