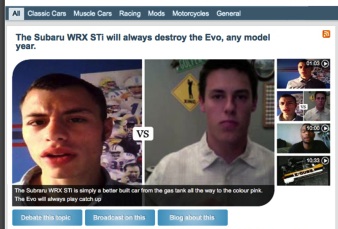 Viafoura is one of 53 companies chosen by VentureBeat to launch at the DEMO Spring 2011 event taking place this week. These companies do pay a fee to present, but our coverage of them remains objective.

Stop me if you’ve heard this one before: Text is fine, but it’s only one form of expression. Audio and especially video are richer ways to communicate — so why is online communication still dominated by text?

It’s a familiar pitch, and this time it’s coming from an Ontario, Canada-based startup called Viafoura, which offers publishers a commenting system that incorporates text, audio, and video. Co-founder and chief technology officer Ali Ghafour said he’s taken a close look at why video comments haven’t taken off in the past. Here’s how he explained it in a e-mail:

The number-one complaint for video conversation comments is that they are hard to scan and [users] do not want to invest the time in reviewing a video comment when they can scan a text comment. The REAL issue here is that no one wants to read a comment from someone they do not think is worth listening to. If, however, you knew beforehand that this person was someone who IS worth listening to, you would watch the video.

Viafoura solves that problem by showing where the author of each comment ranks in the Viafoura community, so you’ll know if other users thought their comments were worthwhile.

One of the other obstacles, Ghafour said, is the time it takes to open and load a video — but Viafoura takes advantage of the HTML5 format to create a quick, easy experience where you just mouse over the video and it starts playing.

That’s a persuasive response, but I reminded Ghafour of social networking startup Seesmic’s original incarnation as a “Twitter of video,” where users could communicate through short videos. Traffic to the site stalled, and founder Loic Le Meur posted a message saying that video is “a sure path to failure.” He added that “it’s not a technology problem” but “a human problem” that not many people want to communicate through video. (Seesmic also powered the video in commenting system Disqus, which we use at VentureBeat — and it looks like Disqus doesn’t support video anymore.)

Once again, Ghafour had a reply ready. He said that Seesmic tried to build a community around video alone. Video doesn’t create community, but it can be a useful way to express yourself within an existing community.

Viafoura also allows you to structure the comments as a debate, where each person presents their side, then readers can vote on who’s more persuasive. Ghafour said that could provide a particularly useful alternative to the infinite back-and-forth replies that you get in heated or polarizing conversations.

Users can chat on the Viafoura site, but the company’s main focus is working with publishers and other partners. Publishers can incorporate Viafoura’s technology into comments on existing articles and webpages, and they can use it to create a separate community and discussion areas. Viafoura has already signed on three partners reaching a total of 3 million users, Ghafour said.