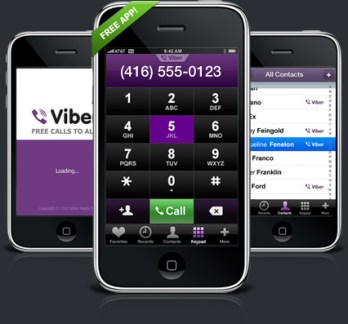 Just when you thought Voice over IP (VoIP) couldn’t be exciting again, along comes Viber with its free iPhone app for simple VoIP calls. After launching on December 2nd, the company reports that the app has been downloaded over 1 million times in its first three days.

That’s an impressive feat for such a young service, and it’s a sign that there are big things to come from Viber. The company also tells us that it’s also the No. 1 free app in the Netherlands, Spain, Singapore, Taiwan, Israel and several other countries.

Viber, like other VoIP services, lets you make calls of your phone’s data network. Viber can make calls over 3G and WiFi connections. A call between Viber users therefore doesn’t use any cellular data minutes, and the app doesn’t charge extra for international calls — making it an ideal choice for users with friends and family abroad.

After playing around with the app, I can see why it’s becoming such a phenomenon. Unlike other VoIP services like Skype, Viber doesn’t require any user registration to make calls. You simply download the app from the App Store, plug in your phone number and the app finds everyone on your contact list that also has the app. Viber users show up with a Viber icon within the app. For other members of your contact list, you have the option of easily inviting them to the service.

Another nice thing about Viber is that you don’t have to be logged into the app (since there’s no login process) to receive Viber calls. The service will also alert you if you’ve missed a call, even if your phone was off, or if you didn’t have data service.

The company also has plans to release apps for Android, BlackBerry and Symbian phones in the near future. Eventually, Viber is going to get into the free texting game as well, but there’s no telling yet when that’s going to happen.

Viber is based in New York, NY and was founded this year by the folks behind the file sharing service iMesh. We’re awaiting funding details from the company.

View a demonstration of Viber’s app below:
[youtube=http://www.youtube.com/watch?v=UAVE8djwnTQ&w=640&h=385]