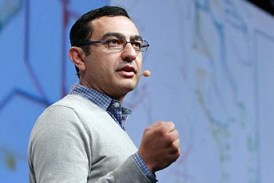 Google-watchers, add this name next to Sergey and Larry: Vic Gundotra is one of several Googlers with the meaningless title Vice President of Engineering. What the guy really does is evangelize Google’s technology and worldview to the people whom the company hopes will build their businesses with it, or on top of it. His job is to drive adoption of, and build momentum for, Google’s specific vision of future technologies and businesses built atop Google’s APIs, operating systems, and other tech platforms.

Gundotra spent the Nineties and most of the Oughts at Microsoft. Let’s spell it out: This guy got software developers to put down their seething hatred for anything Bill Gates touched and actually try Windows Live. He hired Robert Scoble to put a bloggerly face on Microsoft’s marketing to software developers.

Google wanted Vic so badly that they waited for him to take a year off after leaving Microsoft in 2006 in order to keep from violating his non-compete agreement.

His public prominence has gotten to the point where a source called to suggest that he’s being groomed to take over the company. I don’t think so. But he’s certainly the guy to put in front of the geeks. Gundotra is good enough onstage that he survived Conan’s harsh put-downs. O’Brien told the audience that Vic was “the most condescending man I’ve ever met.” Vic had the sense to smile.

Last year, Gundotra struck a chord with attendees at VentureBeat’s MobileBeat conference, even when making dubious statements like: Google can’t afford to support multiple smartphones. Gundotra preaches a gospel of HTML5 browser apps, rather than using Flash or spinning off a new app for every popular mobile operating system. Regardless of Google’s cash reserves, it’s a technically appealing goal.

If you weren’t at Google I/O, the following video clip shows how easy to follow he is. You get the sense he practices at home. Attendees said Gundotra has lost last year’s awkwardness and developed a fluid, opinionated onstage manner. He can sling corporate-speak like “momentum” and “adoption,” yet you get the feeling that in a pinch, he could optimize your assembler code. His personality emerges between the canned lines: After showing attendees a performance test at which Android thoroughly beat the iPhone, he tossed off a cocky aside, “I wonder if that will be in the App Store.”

He’s no Conan O’Brien, but he’s becoming one of the company’s most powerful assets. Right now, Google is sliding into the position once held by Gundotra’s previous employer, Microsoft. The company has gotten so big, so successful, that its every move is scrutinized for violations of the old “Don’t Be Evil” code of conduct. Vic Gundotra comes across as a guy steeped enough in technology to know good from evil when he sees it. More important, he’ll convince you he’s right.