Cambridge, Mass-based PodZinger, previously branded as a search engine for podcasts, has re-named itself EveryZing, and raised $10 million to expand its services.

EveryZing has a video and audio search engine for consumers, which we’ve covered before, but CEO Tom Wilde says that the company is using the money to change focus: EveryZing will use its speech-to-text technology to help publishers get their content into major search engines’ results and get related advertising.

Wilde claims that this technology, developed by military contractor and EveryZing’s original parent company, BBN (EveryZing has since spun off), is 85-90% accurate and has the capability to extract the meaning of a video’s content in ways that competitors like Adap.tv and Scanscout‘s cannot. Specifically, he says, EveryZing has better speech recognition and natural language processing capabilities (We looked at Adap.tv and mentioned Scanscout here.)

EveryZing’s technology seeks to extract key terms from the transcripts it creates and auto-tag the content, making it searchable by Google and other search engines. Video search engine blinkx has similar capabilities, but confines usage to its site.

The other aspect of EveryZing’s new strategy is aimed at enabling contextual advertising in audio and video content. Large media producers find it difficult to mine their content for context, which hampers their ability to target ads. On top of this, advertisers don’t want to pitch their products next to objectionable content. EveryZing says its ability to create transcripts and determine their themes can solve these problems.

Getting computers to create accurate transcripts from video and then determine the meaning within them are terrifically hard problems, and EveryZing’s technology produces mixed results. For example: In a breakdown of a complicated TED talk from the author, Robert Wright, in which Wright asks whether or not biological and cultural evolution have direction and purpose, the transcript was impressively accurate — not perfect, but roughly in line with Wilde’s 85-90 percent accuracy claim. EveryZing’s thematic analysis also managed to determine that “biological evolution” was a key term. However, it decided that “histamine,” was a key term, as well. (See screenshot below) If you’re using a contextual advertising technology that relies on these key terms, you might take issue with EveryZing’s judgment.

That being said, it might be a little while before machines can scan transcripts and understand them, so early on, “good enough,” might have to do, even if that means a few ads for Benedryl or Claritin-D show up in a video about the meaning of life.

Fairhaven Capital led the round, with Accel and, strangely, General Catalyst — which invested in EveryZing competitor, Scanscout — participating as well. The company has now raised $15 million in total. 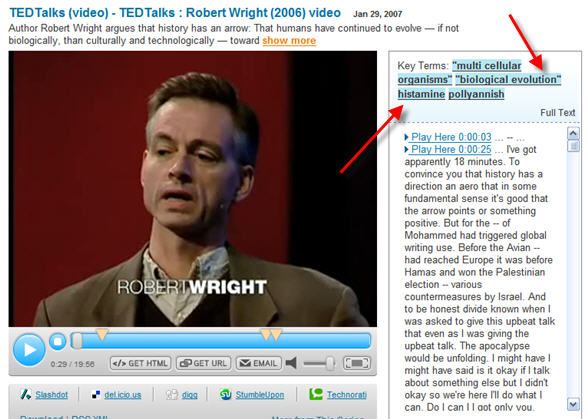