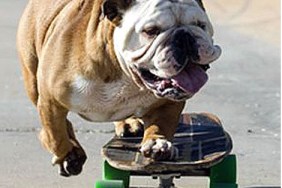 The latest report from Pew Internet Research, The State of Online Video, confirms the suspicion that grown-up Americans see the Internet primarily as a source of unlimited cat videos, rather than a hard news medium. And when they do watch current events clips, they go for politics rather than reporting.

Seven in 10 adult Americans told Pew they have used the Internet to watch or download video.

Fifty percent of Internet-using American adults surveyed via telephone by Pew said they watch “comedy or humorous videos.” In 2007, the figure was 31 percent. Beyond that online video watching keeps getting technically easier, watching funny clips has become a popular pastime.

Political video-watching doubled from 2007 to 30 percent. Movies and TV shows also doubled to about the same fraction, 32 percent.

Thirty-eight percent of respondents told Pew they watch “educational videos.” That sounds like something you’d say to a pollster.