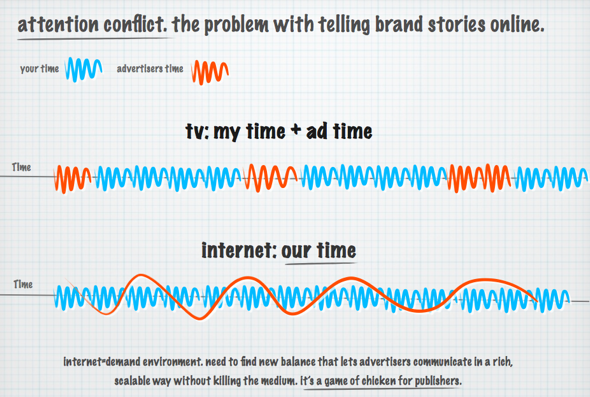 Online display advertising is getting hit by shrinking ad budgets and ever-increasing inventory — and VideoEgg thinks it has come up with a set of solutions. The company offers an ad network for “rich media” — videos, games, polls and other interactive features — designed to grab the attention of web users better than traditional display “banner” ads.

Today, it’s announcing some promising numbers from last year: 171 percent revenue growth in North America, and expansion to more than 100 million unique visitors in December from 85 million the previous month. This is against the trend. Overall display advertising dropped seven percent during the fourth quarter of last year. To date, VideoEgg has delivered more than 1,200 campaigns to more than 300 advertisers, including McDonalds, Nike, Kraft, HP and many others. 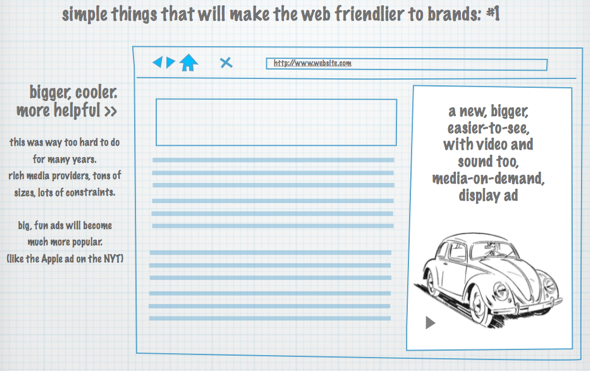 But how much revenue, you ask? The San Francisco company isn’t disclosing that — most startups don’t — but its growth suggests it has a solid position within a turbulent industry. Brand advertisers want as many people as possible to pay attention to what they have to offer — a new kind of deodorant, a new kind of razor, or other products that most people consume. But now they’re cutting banner advertising because it hasn’t been yielding results. This is making life tough for the publishers who rely on this money to survive. Indeed, 27 large web publishers announced today that they are introducing new formats to force readers to see ads, including formats that feature a prominent window with interactive features on a page, and ads that scroll down with you as you read an article. At the same time, these publishers are reducing the overall number of ads on the site to keep readers focused on the ads they do run. The idea is that publishers will be able to prove to advertisers that users actually pay attention to these ads (rather than clicking away in annoyance). Even Google is trying out new forms of interactivity for some of its ads.

Perhaps presciently, VideoEgg itself recommended similar forms of advertising just the other week, in a blog post and presentation by chief marketing officer Troy Young (see also the two excerpted slides above). Here’s more from the post:

While we can get deeply apocalyptic about the future of advertising, at the end of the day we will continue to have thousands of marketers vying for limited mental shelf space. They will continue to buy rights to the mental spectrum. Hard bits matter less, soft matter more. We need to tell stories more than ever. 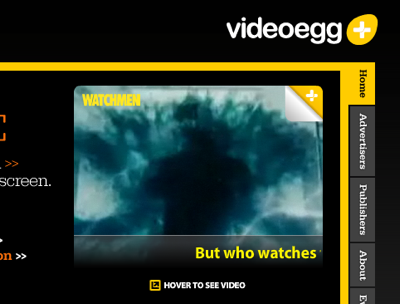 Young sketches out a number of improvements he thinks publishers and advertisers need to collectively push for in order to make display advertising work, including ads that interrupt the user experience (pre-rolls before videos, full page ads), bigger and more colorful ads, and a form of “media currency.” By currency, Young is referring to the cost-per-engagement method of charging when a user somehow interacts with an ad by watching a video, taking a poll, or whatnot. Traditional banner ads use the CPM (cost-per-mille, or cost per thousand user impressions) rate, which is problematic when thousands of readers are looking at a page but ignoring the banners.

While CPM rates can average in pennies, CPE rates average in dollars. In the two screenshots here of a VideoEgg ad for the movie Watchmen, taken from the VideoEgg site, you first see a side panel with an ad, then you hover over it to expand the ad to a screen-sized video about the movie. 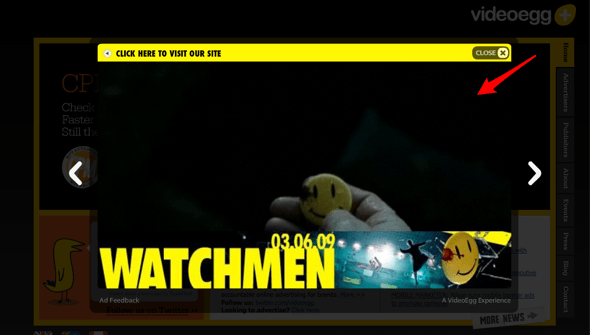 The problem, though, is that most advertisers and the agencies they employ aren’t organized to create and distribute these ads. VideoEgg is trying to help solve that problem by having an in-house creative staff to help advertisers customize existing campaigns to fit VideoEgg ad formats.

The challenge, though, is in creating ads that force users to pay more attention without driving them away. VideoEgg describes this as “a game of chicken” for web publishers — a game in which it hopes it can come first (sorry, couldn’t resist the pun). To that end, the company is also announcing an expansion of its salesforce today. It’s opening up a new office in Atlanta and hiring more sales staffers for its six existing offices around North America.