Second-screen TV app Vidora already impressed us with its ability to aggregate and push video content to our television screens (via Apple TV). Now it’s rolling out some new features that should help its content partners make more money.

Vidora, via its iPad app, essentially makes the set-top box obsolete by pushing all the discovery and navigation of video content to your device — the same principle that Google’s new Chromecast stick is built on. (Vidora launched a couple of months before the surprise debut of Chromecast, by the way.) The service gives you a “watch list” or “queue” of videos from all the services that are either freely available (YouTube, Yahoo videos, etc.) or that you’re paying for (Hulu Plus, Amazon Prime, Netflix). When you want to watch a video, you just push it to your television screen using Apple TV’s Airplay feature.

Vidora also provides content recommendation based on your viewing habits, easy ways to share content via social networks, and the ability to vote (thumbs up or down) on every video — all of which is done using the iPad and without the need of a set-top box’s remote control.

“We definitely see technology like Chromecast, Apple TV’s Airplay, and Miracast as the future for streaming video to your television screens,” Vidora CEO and cofounder Alex Holub told VentureBeat in an interview. “And that’s where we’re pushing ahead with Vidora, but there also needs to be an easy way for these services to grow their business and monetize video content in a way that makes sense for each service.”

Related: ‘Vidora’ is a second screen iPad app all Apple TV owners should be using

While Vidora’s experience is great from a consumer standpoint, it previously wasn’t enticing enough for streaming video services to really perk up because it’s not necessarily growing revenue. Yet, the startup is hoping to change that with the handful of new features in its latest update this week. The update makes it easier for people to sign up for premium mobile subscriptions, simplifies video advertising integration, and provides useful viewing data to content partners.

“We’ve already done a lot of work building a simple platform that lets people push all their streaming video content to the TV screen easily. Now we’re doing the same thing for our content partners,” Holub said. “There’s a lot of benefit in having many of these smaller video services converge onto a single platform like Vidora, [and] not just for people consuming the content. Companies that run a streaming video service can benefit, too.”

Vidora is now allowing its content partners to offer the ability to sign up for a premium monthly subscription through its iOS app. Apple does get its 30 percent cut on any subscription that happens through the app, but it might be worth it for some content providers that simply can’t find an audience. Some of the initial premium services you can sign up for within Vidora’s app include SnagFilms, Sportskool, iflixtv, and Wushu Master TV.

“Usually video services have to go through a long and drawn out process to begin offering the ability to subscribe through Apple, not to mention needing proper approval from Apple itself,” Holub said. “With what we’re doing, we can set that (subscriptions) up in about five minutes.” 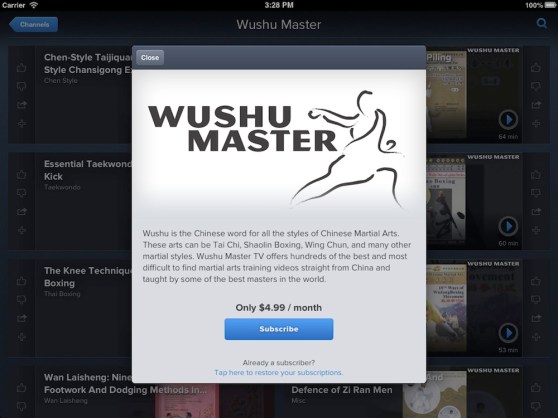 The paid in-app premium subscriptions option also paves the way for Vidora to begin offering live streaming channels as well. Initially, the service is bringing live programming from Bloomberg TV and The Venture Channel. With Bloomberg, you’ll still be able to see all of the on-demand content when navigating to the channel. Venture, on the other hand, will simply show the live feed since it doesn’t have any on-demand videos. More live channels should be available in the near future, Holub said.

But for video services that want to make money in addition to monthly subscriptions, Vidora is also partnering with Unicorn Media and LiveRail, which offer two different solutions for integrating video advertising within partners’ content.

And in addition to the two new options for making money, Vidora is also unveiling a new analytics dashboard that should help its content partners see how people are responding to video content. The analytics dashboard provides lots of information, too, including viewer activity, top videos, top genres, data on demographics, and more. One thing I thought was pretty useful and that I haven’t seen elsewhere is Vidora’s “user groups” metric, which groups users together based on their viewing habits and interests. The data from these groups could prove useful to content partners when trying to sell advertising effectively. (Check out screenshots of Vidora’s new analytics dashboard and live channels embedded in the slideshow below.)

Ultimately, Vidora has built a pretty solid platform when it comes to aggregating video content from across multiple free and premium video services. It’s also given us a very fast and easy way to push that content to the television screen. With these new monetization features, the startup’s service has the potential to really make some waves. In fact, Vidora seems to have built something that could look a lot like Apple’s ambitions to revolutionize the TV industry. (At least if any of those iTV Apple television rumors are true.)

But the startup is also thinking beyond Apple’s walled garden. Holub told me Vidora is actively working on a new Chromecast app, which will bring its second-screen video app to people who don’t want to spend the $100 on an Apple TV set-top box — or any other set-top box for that matter. (Note: Chromecast is only $40.) There are also plans for a Vidora Android App for those who don’t have (or want) an iPad.

Founded in 2013, the San Francisco, Calif.-based startup has 10 employees who previously worked as engineers for enterprise-level cloud-based video service Ooyala. Vidora has raised an undisclosed amount of funding from Core Ventures Group and Interwest Partners.