Making money in virtual reality isn’t easy in these early days of the medium. But Immersv, which has built a VR marketing platform, has some promising early results that show engagement with VR ads is much higher than on mobile or desktop.

Emeryville, Calif.-based Immersv has a platform that tracks whether someone is viewing a particular ad embedded within a virtual reality experience. It found that click-through rates, or more correctly “gaze-through rates,” (GTR) are nearly 30 percent on Immersv’s platform, compared to industry averages of 1 percent for mobile and 0.4 percent for desktop, according to the Innovid 2016 Global Video Benchmarks.

And Immersv said that VR drives 12 new installs for every 1,000 video ad views, compared to 0.5 for mobile and 0.2 for desktop. Video completion rates on Immersv videos are over 80 percent.

Mihir Shah, CEO and cofounder of Immersv, acknowledged in an interview with GamesBeat that the survey is self-serving. But he added, “I am absolutely floored. I’ve never seen conversion numbers like these. These ads are new, but I didn’t see these kind of numbers at Tapjoy or RockYou (where he previously worked) at the dawn of mobile apps and Facebook apps.”

He added, “There’s something about the medium of VR. The numbers are consistent across our network. They are part of a pretty engaging experience, like watching a movie trailer. The ads are popular across the board. It is scaling fast, and we started writing checks to publishers three months ago. It will really be meaningful in 2017. ” 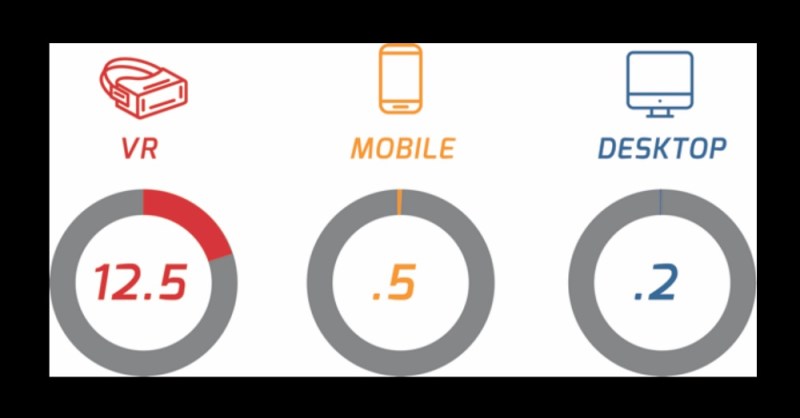 Above: VR is more engaging when it comes to ads that drive installs.

“VR looks to be the most efficient distribution platform of the digital era,” said Shah, in a statement. “And with growth rates multiples higher than mobile, VR may define the next platform shift for ad engagement and user acquisition.”

The data is based on the performance of VR video ad campaigns on Immersv’s network. For the month of July, VR video ads across the network saw conversion rates of 5.3 percent, and for every 1,000 VR ad view starts, more than 12 new users were generated — non-incentivized. By way of comparison, the same 1,000 view starts in mobile would generate about a half of one user.

Immersv also saw an 80.6 percent view completion rate on VR video ads in July. And that number is fairly consistent across types of ad placements and publisher types. By comparison, mobile completion rates are 66.2 percent and desktop rates are 77.9 percent. While VR rates are higher, they’re not markedly different — likely because mobile and desktop data is dominated by pre-roll video ads, Immersv said.t.

Right now, Immersv tracks if someone has clicked on a mobile VR ad (by staring at it to activate it) or exits the application. It doesn’t track whether someone is turning their head to look at an ad, or if they have their eyes closed, or anything else that requires intelligent sensing.

Above: Viewing rates for VR ads beat desktop and mobile on “gaze through rates” versus click-through rates.