Quietly launching into beta this week, Viewzi hasn’t yet kicked up much fanfare. Tucked well away from Silicon Valley in Dallas, Tex., where it was started just over a year ago by a pair of former Broadcast.com execs, it’s a small search startup that isn’t making any big claims about being able to go head to head with Google.

That’s because Viewzi isn’t working on search, at least the way it’s normally defined. Instead, it’s trying to find ways to make searching a more customized experience for users — and in the process, it may be giving a hint of what the future of search will look like.

Here’s the basic idea: Instead of providing a single list of results in a set form for search requests, as Google does, Viewzi provides different “views” that are tailored to the request being made. Say you saw a news item calling Megan Fox the world’s sexiest woman, and you want to judge for yourself. Search on Viewzi, and as well as listing web pages relating to her, like Google, the engine recognizes that you’re looking for a celebrity and also lets you choose from image and video views. 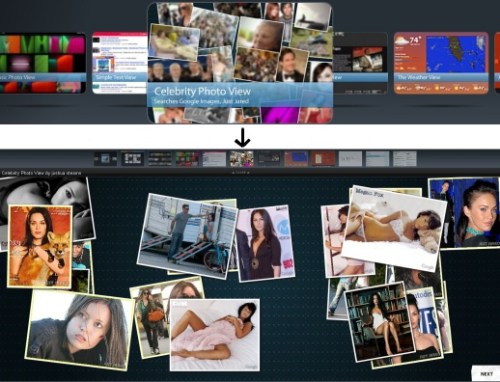 Google, of course, also has image and video views — although they’re not as visually appealing as Viewzi’s. Luckily, there’s a bit more. Viewzi’s “views” can actually take any form — drawing from any source and arranged in whatever way seems most sensible, in order to give the user the most sensible type of data possible.

Say, for instance, I searched for Google’s earnings reports. Viewzi, when it has one, could bring up a financial view pulling from sources like Edgar Online and Yahoo Finance. Or a search for a specific medication could bring up a medical or biotech view. Only 12 views exist at the moment, but the company is building more, and plans to let people build their own and take a share of the revenue if the view becomes popular.

Google, again, can compete with this, and already does; if you search for a company on Google it provides a way to leap directly to a stock quote. However, Viewzi’s design makes for a better experience. And more importantly, it’s a mashup at heart, not a search company, meaning it can use other technologies.

That’s soon going to become very important as fresh search technology companies come of age, like Powerset, which has already built a technology that I think is more effective for research than Google, and Hakia, which is building a whole-web search based off natural language and semantic technology, rather than the statistical analysis that Google, Yahoo, and almost every other search company you’ve ever seen uses.

Users won’t want to have to keep a half-dozen search destinations in their head, though — that’s what led to Google’s overwhelming dominance in the market. Instead, they’ll want an interface that allows them to easily shift between different search methods, and Viewzi is one of the first to offer that, outside of old search mashups like Dogpile.

There’s more — a gorgeous interface like SearchMe, which we also recently covered, and views based off specific content sites like Flickr and Reuters News. There are also some kinks for Viewzi to work out, like reducing the number of clicks required to get to what you’re looking for, and speeding the overall interface up. You’ll have to check them out for yourself, though. To get into the beta test, go to Viewzi.com and use the code “venturebeat”.

Viewzi has so far raised over a million dollars in seed funding, and will be looking for its first full venture round in 3-5 months.