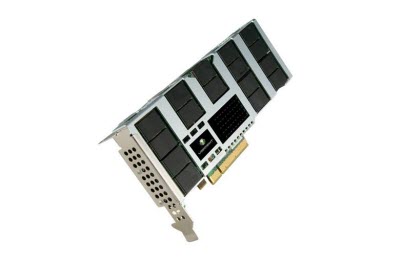 Virident is announcing today that is has raised $21 million to launch its next-generation flash memory for enterprises.

The funding is a rare one for a chip maker, but Virident is playing in one of the hottest parts of the market, where data centers use more flash memory in their servers in order to reduce power consumption and improve their ability to process an enormous amount of data quickly.

Milpitas, Calif.-based Virident is introducing its FlashMax MLC product today, a circuit board (pictured left) that contains a lot of power-efficient flash memory chips for use in data center servers. One card can process 1.4 million input-output operations per second, or as much as a few thousands hard disk drives put together. That means that an entire rack of servers could be condensed into a single server.

“We spent five years focused on how to make flash storage work for the enterprise data center,” said Kumar Ganapathy, chief executive and co-founder of the company, in an interview. “We have experience understanding the physics of flash and have crafted a way for our customers to deploy these flash devices that improve their performance.”

This kind of storage is the only way to deal with the growing gap in the data center, where servers are speedy but memory is too slow to keep feeding data to the processors. The flash cards can be used to store more frequently accessed data in a way that it is much easier and faster to retrieve, in comparison to accessing data stored on a hard disk drive. It also allows for more power efficiency, allowing data centers to reduce their power consumption, which has become the biggest cost for operating a data center.

The company was founded in 2006 (by Ganapathy, Raj Parekh, and Vijay Karamcheti) and now has more than 100 employees. Rivals include Fusion-io, LSI Logic, and Texas Memory Systems. Just yesterday, Fusion-io said it would raise another $100 million by issuing new shares on the public market. Fusion-io went public earlier this year.

Virident started out with the NOR flavor of flash memory in an alliance with Spansion. In the past 18 months, it has switched to NAND flash memory. It is now shipping to more than 40 customers, and the new generation of cards is in the hands of customers, Ganapathy said.

Ganapathy said the company is targeting the highest-performance PCIe-attached memory with high storage capacity. Each card has as much as 1,400 gigabytes of usable memory, with as many as 64 chip packages on each card. The company also creates software to ensure reliability even in the event that some of the chips fail. Each data center can use lots and lots of these cards. Ganapathy said the company’s products perform well across a wide variety of data sizes and workloads.

To date, the company has raised $50 million in three rounds.