A new survey shows that not only are game players buying virtual goods, they’re also selling them in large numbers.

About 31 percent of the people who have bought virtual goods have also sold them. That means that virtual currency is gaining momentum, since any currency that is both bought and sold has more legitimacy in the eyes of its users.

The survey was conducted by market researcher VG Market and virtual goods platform maker PlaySpan, which interviewed 741 of its users. The research showed that in-game virtual currency is the most frequently traded virtual good, when trading occurs between players. In the past year, sellers of virtual currency have earned a median of $22 doing so. 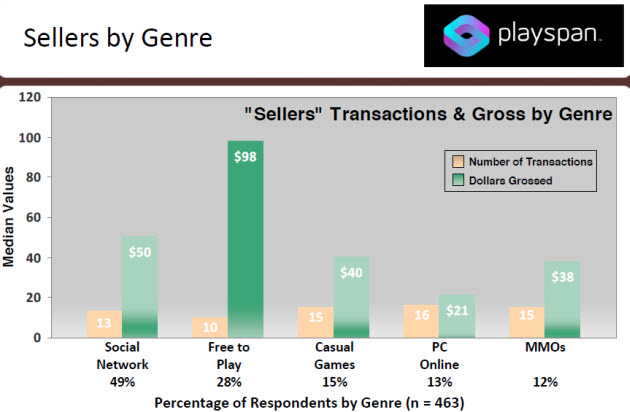 About 49 percent of social network gamers who have bought a virtual good have also sold one in the past year, with the median earnings equal to $50. But players of free to play web site games are more active. In the past year, one out of four virtual goods buyers also made a sale. The median earning was $98, or more than double the amount of money made on social networks.

About 69 percent of buyers of virtual goods have not sold virtual goods. Within that group, 39 percent said they were interested or very interested in selling a virtual good. The survey found in general that sellers had a median age of 21, an annual household income of $30K and that 89% were male.

Eric Hartness, chief marketing officer at PlaySpan, said in an interview that game publishers still have a chance to embrace virtual goods business models and capitalize on them.

“What surprised me is the number of people who are interested in selling virtual goods,” Hartness said. “And it’s across the breadth of game genres.”

Hartness said selling virtual goods between players is good for the overall economy in a game. Players will be more likely to play a game if they think they can actually earn money while playing. An earlier survey showed that the most popular virtual goods are virtual currency, weapons and gifts.