Gaming laptops are a consumer-electronics category that don’t make a whole lot of sense anymore. They’re expensive, bulky, and hot as hell. That’s why companies like Razer are rethinking these products. But the age of virtual reality is starting to reveal some new reasons to own a massive laptop with insane graphics capabilities.

Soon after getting the HTC Vive and Oculus Rift virtual reality headsets, computer manufacturer MSI sent GamesBeat its GT72S Dominator Pro laptop, and while a portable desktop like this may seem excessive in a world where I have powerful desktop and a light ultrabook, it turns out this is an ideal machine for virtual reality. This version of the Dominator features the Nvidia GeForce GTX 980 graphics card — notice that does not have the “M” suffix. That means this is the full desktop GPU (graphics processing unit), which puts it well above the minimum specs for handling VR games both from Steam and the Oculus Store. And after a few days with my desktop in my family room, I loved putting that away without having to worry about dragging it back out. Instead, I can just set up the relatively small, organized gaming laptop when it’s time for more VR.

Analysts with research firms like SuperData predict that VR could generate $40 billion in revenues by 2020. That’s a big number, and that kind of spending could rub off on other categories like the companies that produce gaming-specific PC hardware. MSI, along with companies like Razer and Gigabyte, are well positioned to take advantage of this.

VR requires a lot of processing power. That’s the key here. It takes a lot of juice to render games at 90 frames per second for each eye. Developers need to hit that in order to make a comfortable experience that doesn’t make the player nauseous. But studios will only reliably reach that threshold if they are targeting PC systems with some high-end components.

The minimum-spec machine for Oculus Rift needs at least an Nvidia GTX 970 graphics card and an Intel i5-4590 processor. You can build that into a large desktop case for around $900 or so. But if you’re looking to jump into VR by buying a new PC and a $600-to-$800 headset, then you’re already considering the prospect of spending a lot of money. And a gaming laptop isn’t that much more when you take everything into consideration.

The MSI machine I’m using sells for around $2,200, but those prices are likely going to start coming down as Nvidia ramps up production of its next-gen graphics cards. Even still, this is not exactly $2,200 versus $900. This MSI comes with a built-in SteelSeries keyboard, and those can easily sell for $150. It also comes with an Nvidia G-Sync monitor, and those start at around $400. Having all of that in one shell is convenient and potentially worth the extra cost because you are getting some very serious benefits for VR when you invest in a laptop like this. 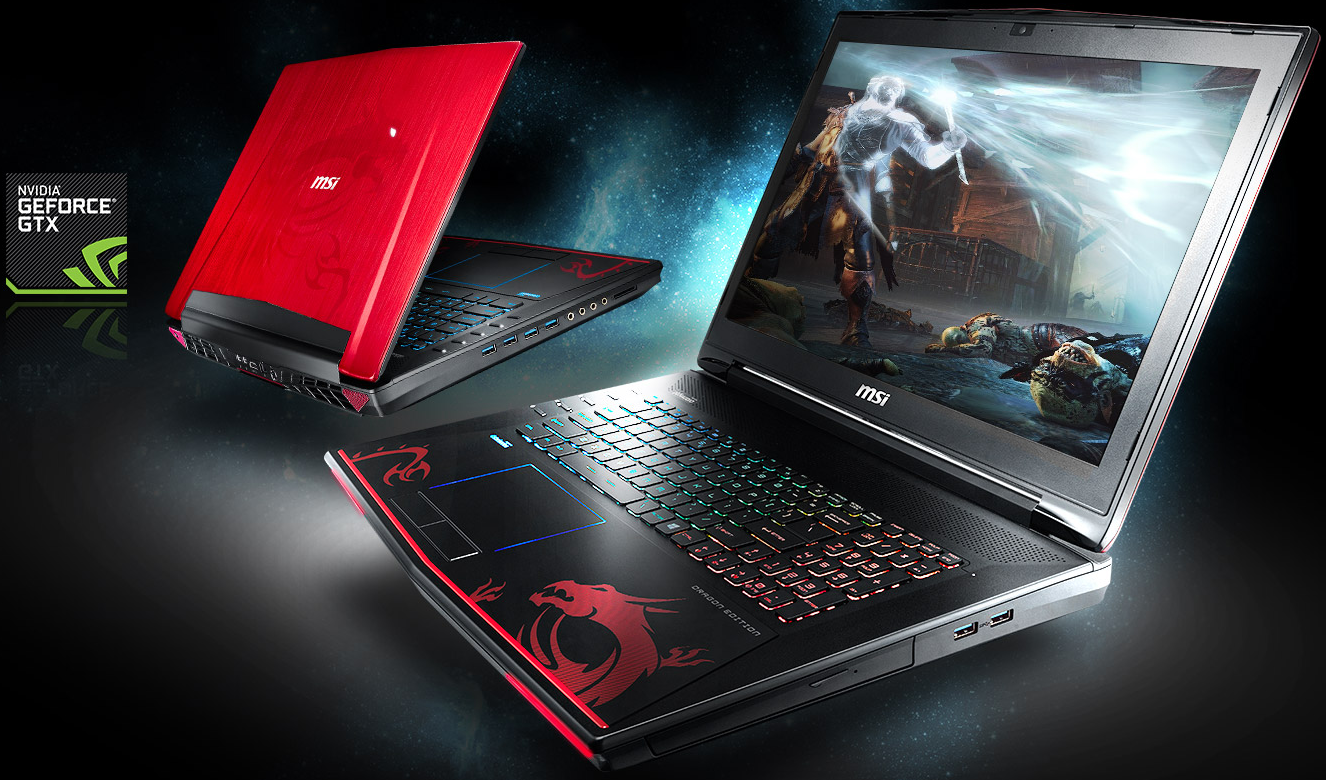 Above: The MSI Dominator.

A gaming laptop is minuscule compared to a full gaming rig

Today, when we talk about VR, we’re primarily talking about the HTC Vive and the Oculus Rift. Eventually, we’ll also have the PlayStation VR and future generations of the Gear VR phone head-mounted display. But, for now, high-end VR requires a connection to a PC. Another thing about this technology is that it takes up a lot of space.

Most notably, the Vive has several games that work best when you clear floor space for its room-scale position-tracking features. This enables you to walk around inside of simulated spaces, and this has led to some of my favorite VR moments yet. Oculus Rift is primarily for use while sitting down, but that’s going to change later this year with the arrival of Oculus Touch.

This all means that your space is at a premium, and it is much easier to maximize the square footage of your VR room when you’re dealing with a laptop instead of a giant gaming rig. When I had my desktop in the family room, I had to put it in place where it would physical fit along with the monitor, keyboard, and mouse. I needed my narrow stand-up desk to properly organize all of this crap. It still took up a huge chunk of the floor, and that’s without worrying about the cords tangling and crisscrossing one another all over the ground. 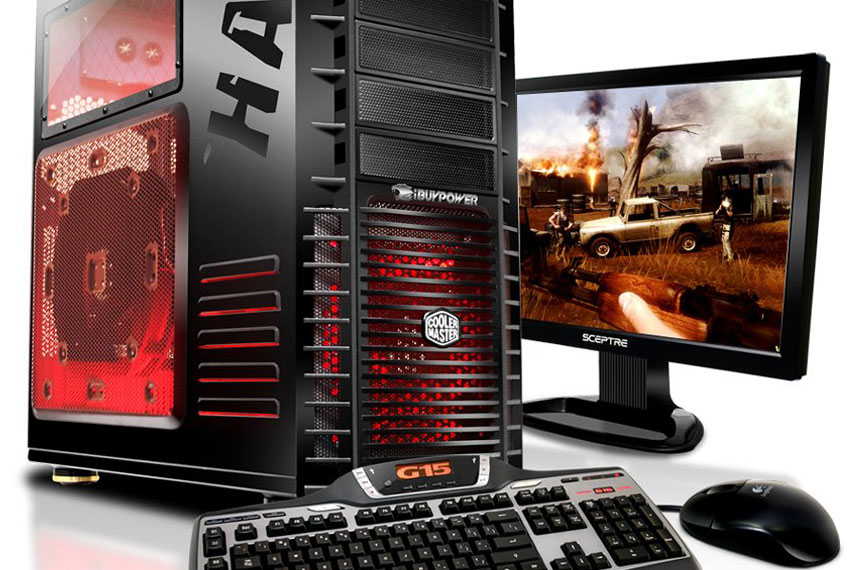 Above: This is a lot to drag around.

With the laptop, I just need to ensure that it is in a place where the cords from the Vive or Rift can reach the furthers corner of the play space. This makes for a much more compact and clean solution. I don’t need a desk, I can just set my laptop on an end table next to the lamp. It has its own monitor and keyboard, so I also don’t have cables everywhere.

Having that extra space and organization is a huge positive when it comes to using a gaming laptop in a VR setup.

VR is best when shared

The best thing by far about using a laptop for VR is that it’s so much easier to get out and put away. If I had to lug my desktop downstairs every time I wanted to do room-scale VR, I’d probably rarely do so.

I don’t want to permanently turn any one of my household rooms into a “VR dungeon.” Having the laptop gives me the option for a quick setup if I find out that friends are coming over or that my wife wants to try AudioShield again.

The laptop is also — despite its large size compared to something like a MacBook Air — portable. I can throw the Rift into a bag and the MSI onto the passenger seat of my car, and I’m ready to take the VR show on the road. That process is a lot more complicated when it’s a desktop, and chances are your friends won’t even want you to bring it over if they find out you’re gonna spend the first 30 minutes of your visit setting up a giant PC.

When I travel home to see my family — something I only do once a year — I’m gonna want to show them the Rift and Vive. Without a gaming laptop, that wasn’t an option. No way in hell am I ever going to pack up my tower to fly across the country. But I may invest in the laptop to ensure I can make that happen.

Now, of course, a VR-capable laptop isn’t all joy. A self-contained portable computer powerful enough to run Rift and Vive games is going to cost a lot more than a comparable desktop. And for most people, the desktop is still probably the best answer. But I can’t deny how much of an improved experience it is to have a laptop ready to go for VR. If that’s your main concern, I would argue that you should at least consider it as an option.