Virtual reality is gaining so much momentum that it will soon become an avalanche of immersive experience. After Facebook’s $2 billion acquisition of Oculus, a leader in the VR hardware space, huge names like Google, Apple, and Sony have joined VR’s deluge, with their own sizable investments in proprietary VR technology and products.

Companies such as Coca-Cola, HBO, and Nissan have ventured into the uncharted territory of virtual worlds with one-off experiences like Coke World Cup experience. While these individual experiences are novel and exciting, this type of advertising isn’t exactly scalable due to the amount of time and resources necessary to create it.

Virtual reality will enable marketers to tell stories, engage, and empathize with consumers in ways that were not technologically feasible before. An animated cartoon short of Coca-Cola’s iconic polar bears is cute and entertaining, and with proper promotion, would succeed in engaging with the soda brand’s target audience. Now imagine spending the afternoon sipping on an ice-cold Coke in the Arctic, rolling around in the snow with those cute, cuddly furballs.

“Integration of brands into this new medium will create some of the most compelling and effective digital advertising ever, because it will be immersive and experiential,” John McCrea, CMO of Media Spike, wrote in “The Next Frontier: Bringing Awesome Native Advertising to VR”. I called up McCrea as I began writing this article, to ask him more about a campaign he did for Despicable Me, where he transformed several of their promotions into VR. He shared some visuals on what they would look like in a virtual world, with billboards that promote the Despicable Me ride at Universal Studios and a blimp that becomes the “Despicablimp” that was used in the promotion of the Despicable Me 2. 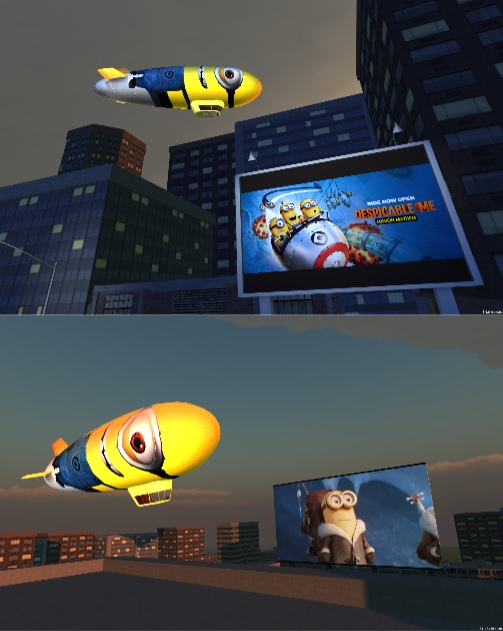 Viewability is a growing concern within our industry. There really is no way to know if a user actually viewed that pre-roll ad instead of opening up Facebook on another tab or shifting their attention to their smartphone. The immersive aspect of VR fixes this problem. A user would have to take his headset off to avoid being exposed to ads that are being integrated into the VR experience.

Advertisers will be able to know what consumers are looking at, when they are looking at them and for how long. The consumer data gathered on the back end of VR platforms is, essentially, everything advertisers wish they could gather in the real world and offers a reliable way to track viewability in a virtual world. Companies like Fove are using eye tracking technology for gaming purposes currently, but I think it’s safe to say that eye tracking in a virtual world won’t be confined to shooting lasers from your eyes, picking off invading alien creatures one-by-one.

Where else can we go?

Mobile is a great tool for brands to connect with consumers, given the intimacy of the individual browsing on their device. In VR, essentially every form of advertising — magazines, billboards, newspapers, street signs — will be targeted at individual users.

In the context of a video game, it is not a far stretch to say that someone playing EA Sports’ Madden Football in VR, actually likes football. Brands will pay top dollar to make sure the best players are wearing Nike jerseys, Adidas cleats, and an Under Armour helmet. Brand advertising will be a part of the experience in a way that native advertising on any digital device could never be. No matter how “native” or contextually-relevant branded content can get, the advertisement, and the content it’s served against, will always be two separate entities, which hinders the consumer’s ability to focus and actually pay attention to the ad itself.

Brands are currently doing everything they can to make their ads blend into the content they’re being served with. This will be the least of advertisers’ worries when it comes to VR. Instead of striving to blend in, brands will be looking for ways to stand out.