Virtuix launched its Omni motion platform for virtual reality in 2015 so that we could all run around in VR. Today, the company has pivoted to the enterprise and arcade markets, and it is now launching Omniverse, a suite of VR games that you can play on the Omni in an arcade.

Austin, Texas-based Virtuix created the Omni as a treadmill where you can run in place, simulating running in a virtual world. It sold about 2,000 of the Omni platforms to consumers, after running a successful Kickstarter campaign. But the company raised additional money, and it shifted to the commercial market to survive the VR desert, or the long wait for the consumer VR market to materialize. VR has taken off more slowly among consumer than predicted, and VR startups have to scramble.

Jan Goetgeluk, CEO of Virtuix, said in an interview with GamesBeat that Virtuix pivoted into the enterprise, and its main business is selling Omni platforms to theme parks, arcades, and other commercial VR operators around the world. With Omniverse, it is providing a suite of 16 games for those operators, and Virtuix is charging a subscription fee to access the games and its arcade management platform. 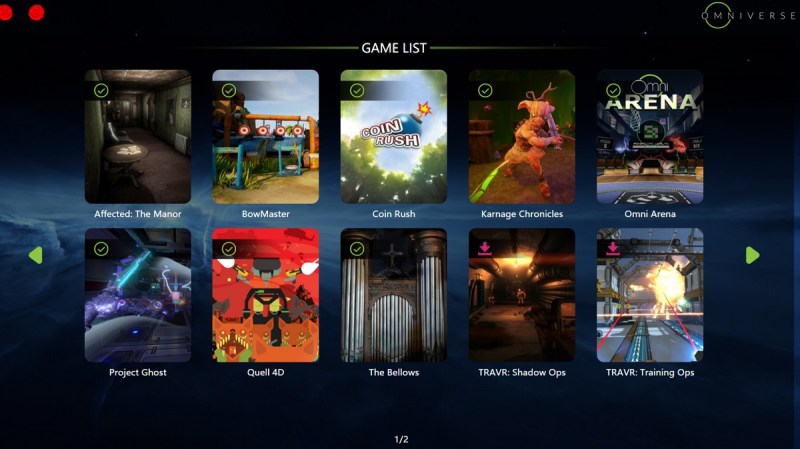 Above: Omniverse is a collection of VR titles for the Omni treadmill.

“VR arcades are operating all over the world,” Goetgeluk said. “We’ve curated a nice portfolio, from shooters to horror to relaxed exploration.”

The titles include popular horror VR titles like Affected: The Manor, the adventure game Primordian, and the fantasy title Karnage Chronicles. All of the games are designed to take advantage of Virtuix’s Omni, allowing you to move in a 360-degree virtual environment. Virtuix will continue to add more games in the coming months.

”Omniverse represents an opportunity for us to launch our game on more than a thousand commercial entertainment systems at once, without the hassle of individual licensing agreements,” said Mark Paul, cofounder of Fallen Planet Studios, developer of the VR horror hit Affected: The Manor, in a statement. “We are excited to release Affected on the Omniverse platform and reach a worldwide audience in places that we hadn’t been able to capture before.” 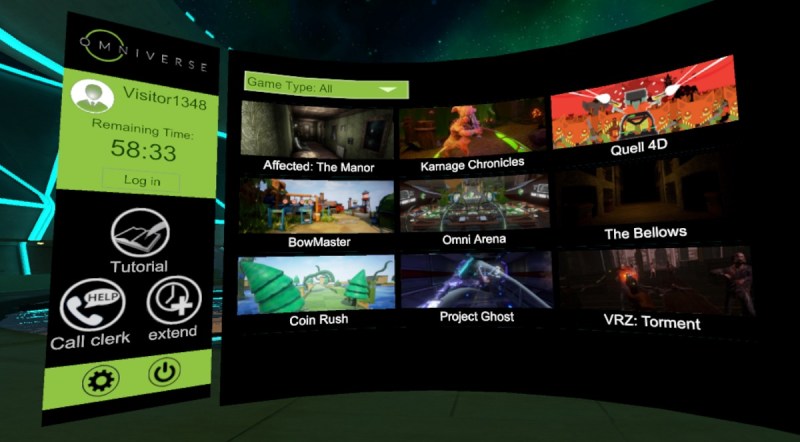 Above: The Omniverse includes a virtual reality storefront.

In addition to its game lineup, Omniverse offers a VR interface where players can preview, launch and switch games from inside the headset. Arcade operators can set the gameplay time for their customers, manage multiple Omnis from a single device, and access online analytics on usage and gameplay. The Omniverse platform automatically facilitates payments from commercial operators to game developers for use of the platform’s content on a dollar-per-minute basis.

“With Omniverse, the Omni has now become a complete gaming entertainment solution,” said Ilya Polokhin, founder of the Hubneo VR Lab in New York, in a statement. “Our patrons can choose from a long line-up of awesome Omni games from within the device, and we can manage all our Omnis from a central console and track gameplay stats and earned revenues in real time.”

Above: The Omniverse has a dashboard for VR arcade operators.

The Omni competes with other VR applications where players can roam freely, with backpacks to hold their VR rigs, around a warehouse. But Goetgeluk said the Omni offers advantages because it keeps you stationary in one place and allows you to operate in a smaller physical footprint.

Goetgeluk founded Virtuix in April 2013, and he has raised more than $16 million in funding for the business. Investors include Mark Cuban and a number of other venture investors. The company has 30 employees, about half in Austin and about half in South China. It also has 80 people in a joint venture in Shanghai with Chinese game company Hero Entertainment. The biggest theme park location is at Wonderland, near Toronto, Canada, where there are five Omni treadmills set up.

“We are excited about the commercial market for VR,” Goetgeluk said. “It’s enables a more immersive VR experience that people are looking for.”