Virtual reality is starting to get some real products. Samsung shipped its Gear VR virtual reality headset in December, and now Virtuix has finalized the design of its Omni Treadmill, which replicates walking and running in a 360 degrees of freedom while you’re inside a virtual world.

I saw the production version of the Omni Treadmill for the first time at the 2015 International CES, the big tech trade show in Las Vegas. Virtual reality was one of its big themes. The Omni works with a variety of headsets, such as Samsung’s Gear or the Oculus Rift, and it is one of many devices aimed at getting gamers off the couch and more active.

Jan Goetgeluk, the chief executive of the Houston, Texas-based Virtuix, said in an interview with GamesBeat that the final design has taken more than three years to complete.

“Our mission is to take virtual reality beyond the chair,” Goetgeluk said. “You’re not just sitting down and pushing buttons. You’re in it. In a first-person shooter, you are standing up, moving around, holding a gun. That makes the first-person shooter a blast, and an immersive experience.” 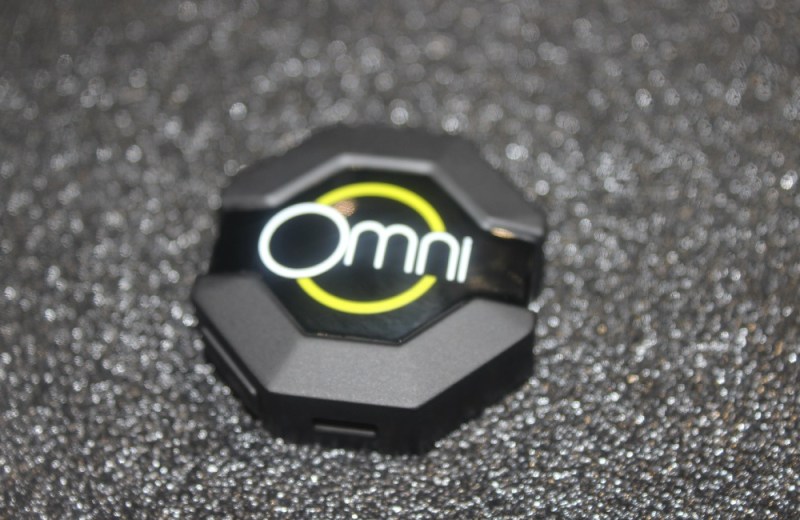 Above: The Omni Treadmill’s parts sensor, which goes on your shoe.

Accessories like the Omni Treadmill could be very useful in helping virtual reality, which is hotly anticipated in the wake of Facebook’s $2 billion purchase of Oculus VR.

While Oculus provides the goggles to view 3D worlds, the Omni provides the motion input that enables you to walk, run, or jump inside a 360-degree virtual environment. It can make you feel more immersed in VR. The omni-directional treadmill is part of a growing ecosystem of peripheral technologies that are necessary to give consumers a complete virtual reality experience.

The final Omni has plastic injection-molded parts with anodized aluminum and coated steel.

“It’s a beautiful product,” Goetgeluk said. “We hope our backers and customers will be impressed.”

It is an omni-directional treadmill with no moving parts. It is based on low friction. You wear special Omni shoes that have a slick surface. You can run on the concave surface of the base, which enables the user’s foot to slide back via gravity after each step, whereas a flat surface would require the user to physically move their feet backward with their own force. That can be tiring, and it isn’t a natural stride. The concave surface also reduces any impact on the joints from walking or running. The user attaches a sensor attach to the shoe, an Omni Part, which tracks your every movement.

“It’s much more accurate and low-latency than anything we have ever shown before,” Goetgeluk said.

Goetgeluk said you cannot fall with the Omni. The Omni support harness is not attached to the support ring, so a player has free and untethered movement ability. The player can rotate quickly or jump without restraints. You can walk, run, jump, step backwards, strafe sideways, and even sit. If you want to go prone, you’ll have to do something like press a button. 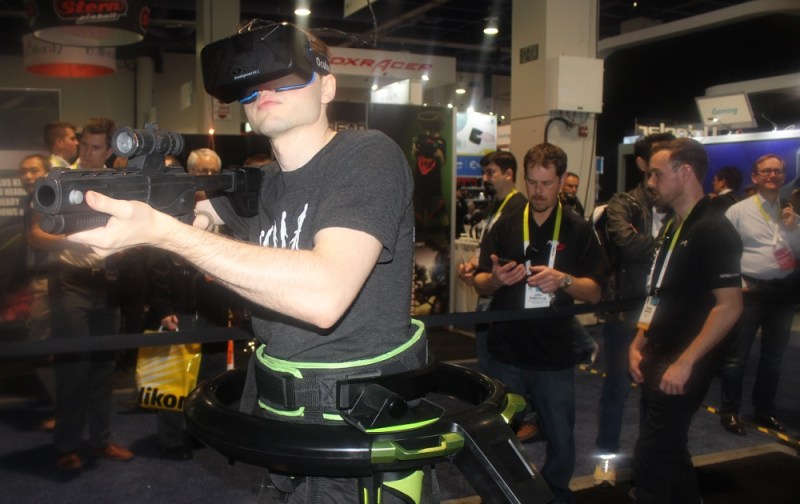 Above: Omni Treadmill by Virtuix

Meanwhile, a fixed support ring ensures that you won’t fall, Goetgeluk said. Your hands are free so that you can hold a gun. Right now, it works with a gun from Cabela’s Top Shot Elite Xbox 360 game with a Windows controller. The Omni can connect via Bluetooth with a PC or mobile VR device such as the Gear VR.

Virtuix plans to ship its first treadmills this quarter, a bit behind its original schedule.

While the treadmill could enhance games, it’s also a great fit for fitness, tourism, and social gatherings, Goetgeluk said.

Goetgeluk founded Virtuix in 2013 though he began the research much earlier. Virtuix has raised $7 million to date, and it has presold thousands of Omnis.

Right now, you can still buy the Omni Treadmill for $500. After Feb. 1, the price is $700. The Oculus Rift headset is not included in the price.

Virtuix had to hang a cable down from an overhead boom to make sure the wired headset didn’t get all tangled up. Goetgeluk said that Virtuix is developing its own boom as an accessory.