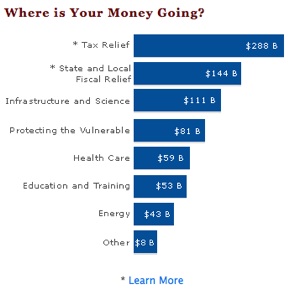 You may have heard that President Barack Obama signed the $787 billion economic recovery bill today. The recent House and Senate votes were divided almost entirely along party lines, but hey, it passed, and regardless of how you feel about the bill, you can track where all that money gets spent on the new Recovery.gov website.

Past visitors to WhiteHouse.gov will probably notice that that recovery site looks almot identical. There are some cool bits of information up there already, including the text of the bill itself, as well as charts showing (very broadly) how the money will be spent. Even better is the promise of more to come, particularly searchable data on where exactly federal agencies are distributing the money. The site also says the team is looking at ways to make that data exportable for mashups and gadgets, although there are no solid promises.

Readers may recall that I criticized WhiteHouse.gov for its ridiculous 500-character limit on messages. It looks like the White House site has increased that limit to 5,000 characters, and the Recovery site includes no such limit at all. Apparently a compilation of comments sent to the site will be presented to the Recovery Accountability and Transparency Board at its first meeting. (Note that “presented” doesn’t mean any of the board members will actually read it.)

Regardless of whether you’re interested in the stimulus plan’s impact on broadband, cleantech, or the economy as a whole, I’d suggest following Obama’s advice and checking back often.