Media conglomerate Vivendi spent perhaps $683 million acquiring about a quarter of the stock of French video game publisher Ubisoft over the past year or so. But Vivendi said Thursday that it has no plans to make a hostile takeover of Ubisoft, maker of games such as Assassin’s Creed, in the next six months. Paris-based Vivendi made the announcement as it reported its third-quarter earnings.

The news puts Ubisoft, which cofounder Yves Guillemot still runs, at ease. The company has been worried that a loss of independence will be bad for the company’s capability to make games and hang on to its 12,000 employees.

In a statement, a Ubisoft spokesperson said, “Ubisoft takes note of Vivendi’s statement. We will remain vigilant about their long-term intentions and will continue to pursue our strategy of growth and value creation in the interest of all our shareholders.” 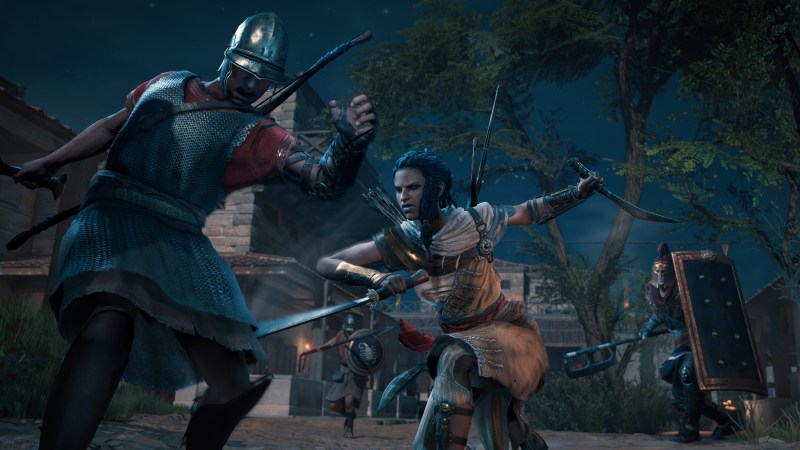 Above: Aya, Bayek’s wife, is out for a vengeance of her own.

Ubisoft’s stock has been up 96 percent since January, as it has beaten its own sales targets during the year. That rise in stock price has made any full takeover more expensive.

Ubisoft’s founding family, the Guillemots, hold about 15 percent of the stock. Vivendi owns 26 percent, and it was possible that its share of the voting rights was going to rise above 30 percent. At that threshold, Vivendi would have to say whether it planned to make a bid to acquire the whole company, or decline to make such a bid. In this case, Vivendi said it “does not intend to file a public tender offer for Ubisoft shares, nor to acquire control of the company over the six coming months.”

Vivendi also said that it has an unrealized gain of $1.17 billion on the stock that it owns in Ubisoft. (That means the investment has been good for Ubisoft because of the stock price rise). Since Ubisoft is worth about $7.1 billion in market capitalization, Vivendi’s stake is valued roughly $1.85 billion. And if you subtract the gain, then the amount Vivendi spent acquiring the shares was around $683 million.

To keep its holdings under the 30 percent level, Vivendi will likely have to start selling off shares. It will also not seek to put any of its representatives on the Ubisoft board.

Michael Pachter, analyst at Wedbush Securities, said in an email, “I actually think Vivendi is being clever.  There was no reason to go over 30 percent (requiring a tender, or offer to buy all the shares, or a sell-down below 30 percent) if they didn’t intend to tender.  I think they said they don’t intend to do so in order to tank the stock, and I expect a tender in the next couple of weeks at a lower price.”