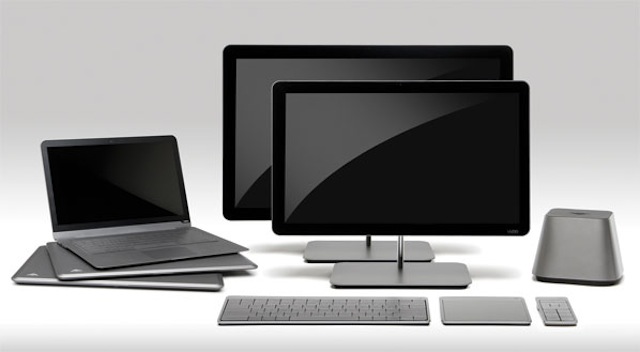 Vizio, a company best known for its line of LCD televisions, is launching a new line of sleek-looking computers. The company debuted the computers today at the Consumer Electronic Show in Las Vegas.

The line consists of five new all-in-one computers — two desktop PCs, a laptop and two ultra thin notebooks — that will run Windows 7 operating system. While there is certainly no shortage of PCs in the market, Vizio’s lineup is quite aesthetically pleasing, as you can see in the image above. Many people have pointed out that much Apple’s success is directly related to the aesthetics of its products, and sales of Vizio’s new line could put that theory to the test.

The company said it plans to use the same strategy that made the company’s TV business successful: offer lower prices on premium quality devices. Yet, it remains to be seen if this will actually work, since the company hasn’t announced prices yet.

Vizio isn’t saying much about the specifications for any of the machines, but the company did release a few standard details.

The two all-in-one desktops, which look very similar to Apple’s line of iMac computers, will come in 24- and 27-inch sizes. Also, one of the images below indicates that the screen harbors a built-in web cam. As for the laptops, Vizio is offering a regular 15.6-inch machine and two ultra-light-and-thin 14- and 15.6-inch models. All the devices come in a fetching brushed metal color.

The line is scheduled to hit retail stores this Spring. Until then, check out the photo gallery below as well as a video of Vizio CTO Matt McRae describing the company’s approach to design.

For more gadget news, be sure to check out VentureBeat’s full coverage of CES 2012.