The vSphere Integrated Containers are meant to work on top of companies’ existing vSphere software for running virtual machines in their on-premises data centers. Here’s how it’s described in a statement today:

Photon Platform, by contrast, is intended for hip companies that are building new apps. It comes with the new VMware Photon Controller — a “control plane” that will be open-sourced, according to the statement — and the new VMware Photon Machine, which has a new “ESX Microvisor” derived from VMware’s ESXi hypervisor and the Photon OS (VMware announced that earlier this year). The Photon Platform products will become available in private betas in the third and fourth quarter of this year.

These new packages of software, which are being announced at VMware’s VMworld conference in San Francisco, represent the company’s latest steps to control the disruptive force that containers are having, following the rise of startup Docker’s open-source container technology a couple of years ago. That’s why this is perhaps the biggest news out of the conference this week. 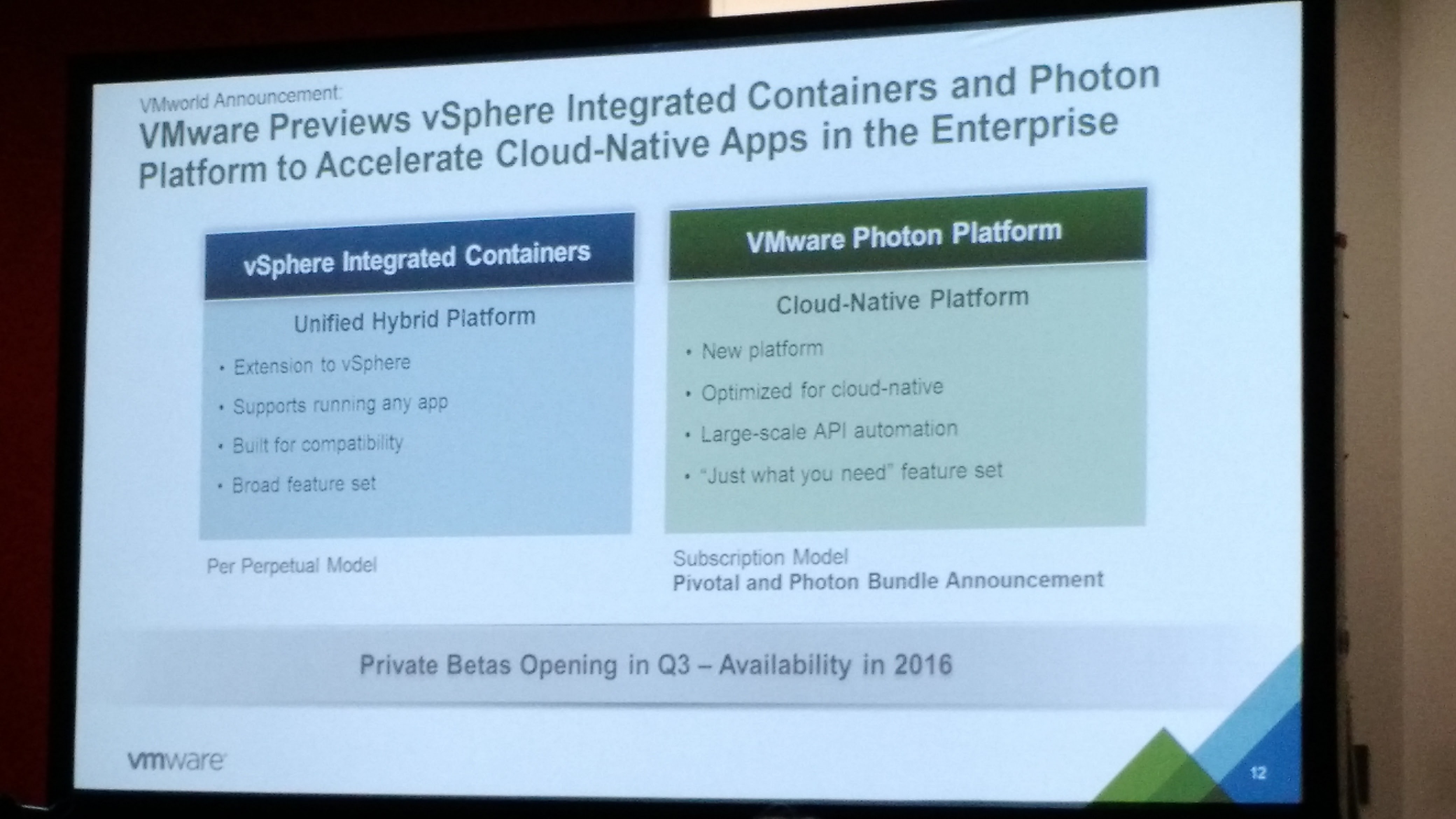 Above: Some detail on vSphere Integrated Containers and Photon Platform from a press conference before the first day’s general session at the 2015 VMworld conference in San Francisco on Aug. 31.

VMware made its first moves around containers last year. So did Microsoft — which itself has been working on several technologies related to containers, including Windows Server Containers and Hyper-V Containers. Those efforts are also important because Microsoft is also a seller of virtualization software, even if Microsoft’s Hyper-V is not as widely deployed as VMware’s vSphere.

Pivotal is partnering with VMware to develop and sell a software bundle with Cloud Foundry and the new Photon Platform. More on that initiative in this blog post from Pivotal’s James Watters.

The fascinating thing here is how VMware sees this new technology as underlying a whole bunch of existing technologies from other companies that have been gaining popularity in the past several months. That includes Docker’s Swarm, Google-led Kubernetes, Mesosphere-led Apache Mesos, CoreOS’ Rocket, Cloud Foundry — “all on Photon,” said Kit Colbert, VMware’s vice president and chief technology officer for cloud native applications, in a press conference before today’s general session. All those can integrate with vSphere Integrated Containers. (Deep dive blog post here.)

Mesosphere itself wants to be the provider of an underlying technology — the Data Center Operating System, to be exact. While Google believes container workloads will work best on the Google public cloud, Kubernetes works on any cloud. CoreOS has had a lightweight Linux OS for a while now. And Docker? It probably wouldn’t mind being the definitive container company, above any other. After all, Docker did make containers a thing. The unifying element here is that Docker, Mesos, Rocket, and Kubernetes are available for free under open-source licenses.

It will be fascinating to see how widely adopted the only partly open-source vSphere Integrated Containers and Photon Platform will become.